Much like the superhero at the center of DC's next big film, it seems as though David Sandberg was struck by a magical lightning bolt that changed his life forever.

The Swedish native first landed on Hollywood's radar with his three-minute horror short, Lights Out. That led to Sandberg directing the big-screen adaptation of Lights Out and, later on, the Annabelle sequel Annabelle: Creation. Now, he's switching gears and tackling his most ambitious project to date, the superhero adventure Shazam!

The movie follows Billy Batson (Asher Angel), a teenager whose life changes forever when an ancient being known as the Wizard interrupts his subway ride. The Wizard grants Billy the wisdom of Solomon, the strength of Hercules, the stamina of Atlas, the power of Zeus, the courage of Achilles and the speed of Mercury. All Billy needs to do is shout the word "Shazam" and he transforms into an adult superhero, played by Zachary Levi. Along with his best friend Freddy (Jack Dylan Grazer), Billy must learn to wield his extraordinary abilities in order to put a cork on the Seven Deadly Sins and take down his new arch-nemesis, Dr. Thaddeus Sivana (Mark Strong).

Last year on the Toronto set of Shazam!, Sandberg spoke to SYFY WIRE and a contingent of journalists about the tone of the film, Shazam's costume, casting Zachary Levi and the influence of Shazam's revamped origin story, as seen in the New 52 comic books.

During the development process, how much did this story change along the way, and how much is it what you first discussed?

The core of it didn't change so much. There are some things about the [Seven Deadly] Sins and stuff like how they worked. I can talk about that, right?

No, just having fun with sort of how the Sins worked and everything because I wanted to do something a little different from the Geoff Johns versions you have. They look very different because you have one that looks like a person, one that looks like a monster. And I wanted to go more sort of monster route and also do cool stuff with the mechanics of how they go between solid form and ghost form, and how challenging that is to fight and stuff like that.

The comic Shazam is lesser known for some people. Is this a character you were particularly interested in when the project came up, or that you knew about?

He was lesser known to me as well when they approached me. Yeah, I was just vaguely familiar, so I did a deep-dive research kind of thing after.

What was it about the character that made you want to take on this project?

Well, basically they told me, "Oh, it's like Big with superpowers." It's like, "That sounds awesome." There's so much you can have with the wish fulfillment of this kid, who gets to become a superhero and try out all these things. It just felt very unique.

Well, yeah, maybe we can. Well, we actually have other references to Big.

Does it involve the famous piano scene in Big?

You'll have to see exactly what they are. Yeah, there's a couple of them actually.

Something we keep hearing a lot about is the tone of the movie. So, can you break it down maybe in your terms what you consider the tone?

It's a fun movie. It's not a pure comedy, because you still have those... touches. Some pretty dark subjects and some pretty scary monsters. I like to compare it to like '80s movies, like Goonies, and Ghostbusters, and Back to the Future. That sort of, "Oh, it's a family kind of [movie.]" It's not dark and gritty.

Which is great when it's like, "Well, how do we explain that?" Well, it's magic so it's like, "Finally."

Can you talk about the casting a little bit? How did you end up with Zachary Levi? What did he bring to the table?

You mentioned Geoff Johns' run, and in that, the wizard Shazam and the council cracked open that entire world of magic. Do you allude to any of that in this film?

Oh, yeah. Yeah, because the Wizard has this whole backstory and this whole protecting the realms against the Sins. Yeah, we definitely allude to that.

We heard earlier that you were influenced by The New 52. Can you talk about the influence that you pulled from the comics and maybe some of the changes that you went through in costume design?

Yeah, I wanted to incorporate a little bit of everything, not just in 52, but the older stuff as well. The suit is one part of that, where it's like, "Yeah, I want the shorter cape of the Golden Age comics." And like, "Let's try the hood from The New 52," and little things like that and trying to balance it. So, we have things and references from the old comics, but a lot of the story takes inspiration from The New 52. So, it's a combination of, "Oh, I like this, and we like that, and let's put it together."

In the sizzle reel we saw, it seemed like there was a lot of practical effects. Obviously, you can make the heroes fly, but how much of that are you doing and how much is going to be digital?

As much as possible. Some things you just can't do, like the Sins. You have to make them CGI with what they do and everything, but we try to as much as we can practically with explosions and flying and being on wires and all of that. Yeah, we take it as far as we can, and then CG will have to take over when we can't get there.

You gave a little information on Shazam and Freddy as the resident superhero expert. Can you talk a little bit about bringing that to the film and the fun that sets up?

Yeah, it's basically two kids having fun with superpowers, but one of them is an adult. Already, just visually, it's funny with this little kid and this big guy, and they're like, "Oh, awesome." And then we got really lucky again with casting. Jack Dylan Grazer and Zach Levi together are awesome because a lot of times when we're shooting, I'll just wait to yell cut, because they always keep going and add little things. And most of that won't end up in the movie, but I like to see what happens. No two takes are ever the same with those two as well, because they always are changing things up.

In what ways are you setting up Shazam for the greater DC Universe and the upcoming Black Adam movie?

This movie's mostly just about introducing Billy Batson and Shazam, and who he is, how he came to be. It takes place in this DC world, where all these heroes exist. But, in some ways, it's both sort of self-contained, while also being a part of something bigger. But, yeah, that's a non-answer.

How much effort was there to make sure it worked self-contained? In Justice League, that movie works better if you've seen other movies before it. So, how much did you think of like that as you're developing the movie?

No, in that case, it's very standalone. You don't have to have seen any of the other films, because it is its own contained story, really. It's just more the world of it that's part of it.

A lot of superhero movies kind of go overboard with their final act, but what we've seen from these big action sequences here, they're all kind of these relatively personal spaces, like a mall, or a winter carnival. Is that something that carries through the whole movie?

Yeah, it's a very personal story, which I like because I find it more engaging when it's not an entire world and there's a blue beam in the sky and Robin coming in. So, it's fun where this whole carnival is in danger and all these people and you can be saved. It's more manageable and I think it's more engaging as well.

Can you talk about the setting? This is set during Christmastime, like the wintertime. Is there a purpose for choosing that specific time and setting for this film?

It's a lot about family and Christmastime and this family holiday. And it's about finding your family with these foster kids. So, yeah, it was just very appropriate for the story. It just meant that we had to shoot it here in winter, which has been pretty brutal. Shoot it all on location during nights, because they were telling me, "If you shoot the carnival during the day, you get more kid hours, everything will be easier." And, I was like, "Well, it's not going to look good with all the lights and everything." So, we've been shooting it during the nights, and it's been pretty miserable. 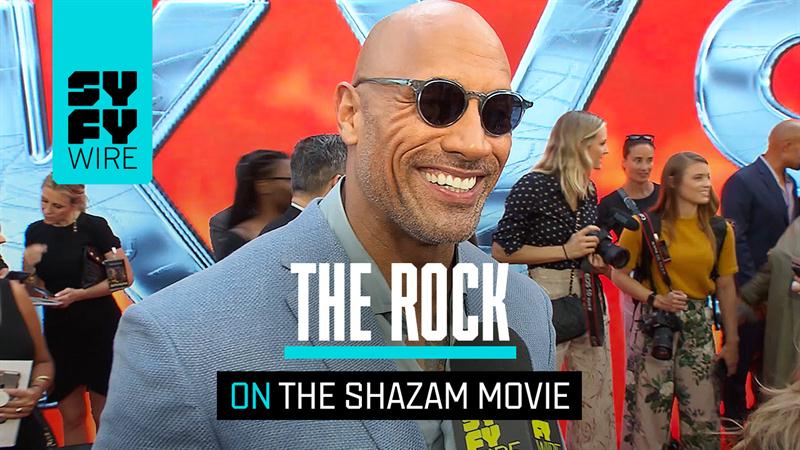 Earlier versions of this project always involved Dwayne Johnson's character, Black Adam. Was that already off the table by the time you came on board?

Yeah, when I came on board, it was like, "Yeah, we're doing a standalone Shazam movie." The project has, I think, existed in various forms before, but I'm not really familiar with all of that.

Can you talk about the learning curve of this movie for you as a director, going from two small-budgeted horror movies to something epic like this?

Yeah, it's quite a marathon. It's a lot of work. It's a very different way of working, just because you have to do all this previs and plan everything out months in advance. And, then. when you're shooting it ... It's not always as fun as shooting a smaller movie, because "Oh, today we're shooting this little piece, and this little piece, because this piece is second unit. This is on blue screen. This is CGI." It's a lot of things to keep track of. So, the shooting is not always fun, but the result is so much more awesome when you have these kinds of resources. So, yeah, it's been a lot of work. I mean, especially like now, we're shooting main unit during the day and second unit is shooting during the night. And I want to be part of as much of it as possible, so I'm not getting a lot of sleep. But, yeah, we're doing some cool stuff.