We've all heard the stories—or, worse, read the books—about the hot young actor who "loves" comics and gets involved with a publisher to make some generic book in the hopes of selling it to Hollywood as a starring vehicle. And then there's Transformers' Shia LaBeouf, who showed off his new comics at the C2E2 convention. Whoo boy.

Listen, of all the things you can say about LaBoeuf's comics, he's most definitely not a poseur: He wrote and drew all of them and had a table in Artist's Alley at this past weekend's C2E2 show in Chicago to sell his wares, which he's self-publishing under the name Campaign Comics. 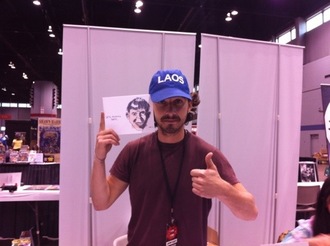 As for the books themselves, ComicsAlliance has a far more detailed "reading" of the content. But a cursory glance reveals, well, that this "illustrated journey into my thoughts" is a rather impressive failure at achieving anything more than a sort of puerile "angry young man" diary-journal.

Judge for yourselves. But don't say we didn't warn you. And, hey: If you've ever wanted to get into comics ... now you have no excuse for not doing it. All you need, apparently, is a crayon and a dream.

(via ComicsAlliance and The Beat)