There are lots of ways to promote your alien-centric, desert-located science fiction film. But Simon Pegg and Nick Frost, the Shaun of the Dead veterans at the heart of Paul, have decided to strap themselves in cardboard and pretend to be droids. Which is, I guess, one way to go.

In fact, the only thing sensible about this whole endeavor is when Frost, as R2-D2, reminds Pegg, as C-3PO, where the Skywalkers live—given that he was built there "by Darth Bloody Vader" three movies ago. Still, it's a nifty little chunk of hilarious.

Thanks to Pegg himself for the heads-up: 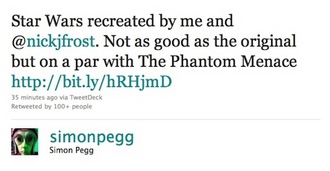