Bryan Singer, you know how to get some Twitter followers in a hurry. After joining the service just a few weeks ago, the X-Men: Days of Future Past director has let loose another pic from behind the scenes—this time showing off some new concept art.

The shot is of Singer's production designer John Mayhre standing in front of two bulletin boards loaded with pics, most of which seem to be exterior and interior shots of Xavier's Academy, plus some landscape pics of a mountain range.

What does it mean? No clue. But it is one of the first peeks we've gotten at anything from the film. So, yeah, speculate away (and click to view it larger). 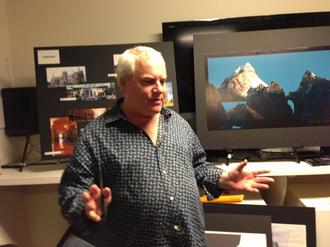 Between this, and the recent bombshell casting news, it looks like Singer's Twitter feed will be the best place to look for updates on Days of Future Past.

What do you see?