Last week we showed you Canada's new hideous, dead mystery cryptid possibly called the omajinaakoos (we have no idea what that is either). Since then, Doctor Atlantis over at Atlanta Skeptics has studied the evidence and come up with a conclusion about what the mystery creature really is. He gave us his permission to share his findings with you. Read on for his explanation of the creature ...

They say what's old is new. Lately the cryptozoology world has been awash (pardon) with creatures found on beaches or near water. These critters all share some common features. First, they're dead. Second, they're either hairless or nearly hairless. Third, they're photographed and the odd pictures are shared on the Internet. Then the speculation storm washes all around us.

Could Underwater's monsters really exist deep in the Mariana Trench?
The 10 most terrifying monsters in American Horror Story history, ranked

This is not new, mind. The history of dead things washed up on shore is long and disgusting. From a dead shark posing as a plesiosaur to a dead raccoon posing as a mutant experiment, these photos apparently capture the imagination of viewers, and that's all it takes to make good news copy.

This week's corpse-célèbre washed up near the town of Kitchenuhmaykoosib Ontario and was discovered by a couple of nurses who photographed it and then shared the photos. The animal is said to be less than a foot long, with a rat-like tail. 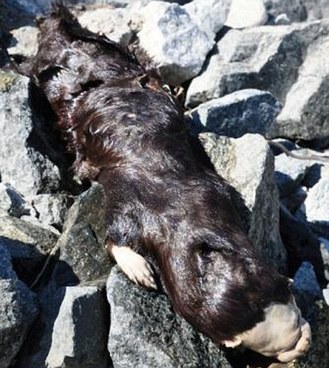 However, it is unclear whether the whole animal is less than a foot, or the main part of it—and then the tail is additional length. Nor is it clear whether that is an estimate or whether actual measurements were made. It's no giant, to be sure.

Speculation about the animal has been rampant, but we can tell a few things about it before attempting an identification.

First, it is a mammal. It has hair and is built along the lines of an otter.

It isn't very large, based on the eyewitness accounts.

There have been some ridiculous speculative remarks made about the animal. Claims that it is a kind of baby sea-monster, a chupacabras, or a lab experiment have been posted on message boards around the net.

A more reasonable idea is that it is yet another normal dead animal with the hair worn off as part of the decomposition process. There are many aquatic mammals that could fit the bill here. Over at Cryptomundo Loren Coleman's suggesting it might be a muskrat or a river otter.

The body shape certainly looks like a river otter and the dentition matches better. 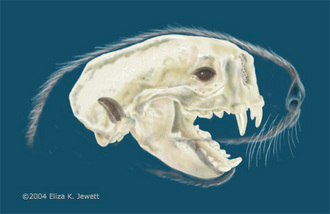 But otters are long animals, sometimes getting as big as three or four feet in length. Unless this was a pup, I'd say it is too small to be an otter. But is almost certainly in the same family, Mustelidae.

My money is on a smaller animal that looks a lot like an otter. I think this animal is probably a decomposing mink. The mink only gets to be one to two feet in length, but has many matching characteristics to our fur-challenged friend here. Take a look and see what you think? I'm sending off the photos to an Otter specialist I know to see if I can get a positive ID, but I see enough matching details to feel pretty comfortable, assuming the size estimates provided by the witnesses are correct.

If history has taught me anything about cryptid corpses it is that the cryptozoology community usually digs in to find out what they are while the general public sits around and guesses whatever comes to mind or fits their folkloric impressions. Already I'm hearing stories from the local in the area where the animal was found that this is an animal spoken of in Native American lore, and a bad omen to boot. Yet it seem clear that what this really represents is a common animal that has been rendered uncommonly ugly by decomposition. The naked face, the white eyes, the teeth—simply put, this animal is un-fur-get-able.

For the latest sci-fi news, follow us on Twitter at @scifiwire
Tag: Monsters
Close Search Return to SYFY homepage.