So how come the Beast is so good-looking in Beauty and the Beast?

One of the most talked-about new shows this fall is The CW's Beauty and the Beast. It stars Smallville's Kristen Kreuk and Terra Nova's Jay Ryan. We interviewed Ryan during this year's San Diego Comic-Con, and he answered a question we all want answered. What's with the Beast's face?

When The CW released the first poster for Beauty and the Beast, fans were shocked by Vince's appearance. There was nothing monstrous about him. With the exception of a scar, he was pretty good-looking.

More Beauty and the Beast

Stupid sexy monsters: why we like beastly romances
55 things I noticed while watching Beauty and the Beast as an adult 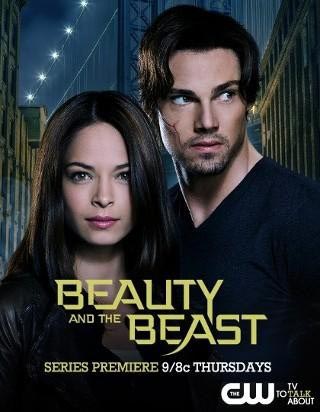 Ryan explained that in this version, there are varying levels of beastliness to his character.

"The backstory of our beast, ours is different," he said. "Ours is about this internal demon inside him, which is chemical and comes out. For me, it's not about what he looks like. That's just a sidebar to it. It's about how a human behaves. And how his mind is like this tangled mess of noble and savage impulses."

In the poster, Vince's metamorphosis is minimal, but in the pilot he's in full beast mode. He revealed that the producers are still working out the kinks in his look.

"I think the idea with the pilot was 'less is more,'" said Ryan. "Because we're still discovering what the beast looks like. So we didn't want to go in like 'this is him.' And we wanted that kind of mysterious element. It gives us somewhere to go with the beast as well. Not put all on the table straightaway."

So what makes Ryan go from hot to not? It's a mixture of makeup and CGI, and it takes hours to complete.

"It was four hours for the pilot," he said. "We just did it new yesterday, and we shaved down the beast and rearranged him a little bit. So now it's two hours. There's a mix of CGI and prosthetics in the pilot. But as the series continues, his transformation will become larger, I think, as the chemical takes over his body."

Overall, we get the vibe that Vince's inner monster has more to do with chemical experimentation than a curse. They're trying to make his situation as realistic and relatable as possible. Will it work? We'll have to watch the show to find out.

Beauty and the Beast debuts Oct. 11.