So did you notice the change Whedon made to Fury in The Avengers?

The one thread that has tied Phase One of the Marvel Cinematic Universe together has always been Nick Fury (Samuel L. Jackson). This came to a head with his co-lead role in The Avengers. But did you notice a change that Avengers director Joss Whedon made to Fury in his latest outing?

In an interview with The Age, Jackson talked about his experiences popping in and out of the various Marvel films, and noted a tweak to his costume that had largely gone unnoticed.

The change? Nick Fury's battle scar around his eyepatch, which Whedon changed to look more like the version of the scar used in the comic books:

"At a certain point in the production, it only took the makeup team 20 minutes to put on the eye patch and scars. However, the first time it took about an hour-and-a-half because we had to go back and forth to Joss. We'd have to ask things like, 'Is this too much? Is this not enough?' We actually changed the scar to the comic book scar for this movie, which is something that a few people have noticed. If you look at the Iron Man and Thor movies, the scar looks like two little cat scratches."

For the sake of comparison, a picture of Jackson from The Avengers is up top, and an older shot showing the old scar is below: 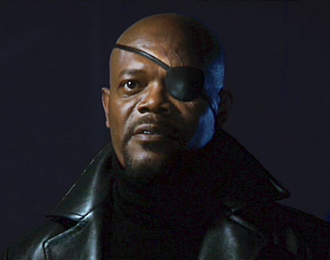 So, did you notice?