Tag: Science
Chewing over Gum 15: A gorgeous nebula in a much larger setting
Tag: TV
Twitter reacts to the premiere of Star Trek: Picard
Tag: Movies
Kumail Nanjiani: The Eternals will be the ‘most sci-fi’ & ‘epic’ Marvel movie yet
Tag: TV
Patrick Stewart reveals what makes him 'squirm' about Picard

Kurt Sutter, creator of the FX biker gang series Sons of Anarchy, just leapt into the Frank Darabont/Walking Dead controversy, tweeting that "the greed of Mad Men is killing the other two best shows on TV—Breaking Bad and Walking Dead." Tell us what you really think!

As we reported earlier, Walking Dead executive producer and series creator Frank Darabont didn't quit but was fired, which apparently came about a result of AMC needing to cut the budget of the zombie series to pay for the increased cost of Mad Men. Sutter had some rather incendiary (and NSFW) things to say about the matter over on Twitter, which he was willing to say because (according to his own words) he's not one of those "silent, terrified @#$!suckers." 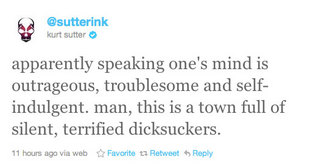