Arguably one of the biggest events of this year's WonderCon in San Francisco last weekend was the panel for Disney's upcoming The Sorcerer's Apprentice. But who knew we were getting a standup routine as a bonus?

Director Jon Turteltaub and stars Nicolas Cage and Jay Baruchel kept the audience laughing with one zinger after another while giving us the scoop on the film. Turteltaub explained the casting with "Jay is the apprentice, and Mickey Mouse wasn't available, so we went with Jay. Jay was cheaper. Not much."

In the movie, based on the animated segment in Fantasia, Cage plays a modern-day sorcerer named Balthazar who has been searching for the next Merlinite magician for hundreds of years. Cage was incredibly animated throughout the panel but sounded like Christian Bale's Batman.

Turteltaub told us, "Just so you know, Nic has laryngitis. He's not trying to sound even cooler than he always is. He's cool, but he doesn't need to sound that cool. Doesn't he sound so cool right now?"

Even through laryngitis, Cage gave us some info on what draws him to roles like this. "When you're playing supernatural characters, like Ghost Rider or City of Angels ... and now Sorcerer's Apprentice, there is an infinite number of possibilities that you can do with the character. I also think it provides really wonderful entertainment for the whole family. You don't have a high body count. You don't have to if that's not to your tastes. The children and the parents can congregate together and look forward to this together ... that's important. ...

"When I came up with this idea, I was on Next," he added. "I was talking with Todd Garner, who's also the producer there. I said, 'Man, I really want to play a magician. I want to play a sorcerer.' He came in the next day and said, 'Nic, I got it. Let's do Sorcerer's Apprentice.' Then I went to my partner at the time, Norm Golightly, and we got a script out of it. We all thought, 'You know who would really put this on a fast track, who would give it all the panache and all the big entertainment style? Nobody better than Jerry Bruckheimer.' So we went to Jerry, and being the good friend and a great producer that he is, he read it and he said, 'Hey, we're doing it.'" 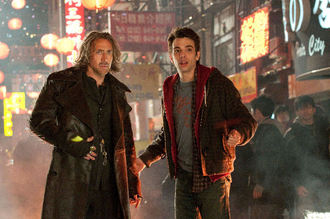 Cage even talked about his hair with good humor. "Actors work with their look," he said. "I come from the Lon Chaney school of acting, man. I want to transform myself every time I [go]. I'll wear wigs, I'll wear nose pieces, I'll wear a green contact lens in my eye. I'll do whatever I need to do to create a character. That's what it's about. That's the fun of it. So I wanted Balthazar to have a look like an ancient ... Jerry says like an ancient rock star, but he has that kind of cool style that harkens back to the 500s or the 600s, which is where he came from. Merlin was his teacher, so I wanted him to have that look throughout. ... He goes through different ages, and then he starts to really look like an ancient magician when you meet him in New York City."

Baruchel talked about his favorite Cage film. "Oh, holy Moses," he said. "Yeah, there are so many good ones. Raising Arizona is pretty special. For me it'd have to be Adaptation. That whole thing was just like he's channeling, he's not just channeling something, he's channeling two things. That's pretty special, and I personally remember when I was 15, I snuck into Con Air with my friends. We bought tickets for something else. It might've been one of the Free Willy sequels or something.'

Cage laughed, saying, "I love that story, because my wife snuck into Face/Off."

Finally, they discussed bringing the iconic Mickey Mouse scene to life. Cage said, "What's amazing ... is we have the technology now to make these wonderful things come to life in a live-action feature. So you have the broom sequence is actually going to happen and go even further still."

Baruchel added, "This time with dustbusters and a Dyson vacuum."