Futurama is back, The Simpsons takes on Twilight, and Family Guy puts the intestinal gas in Return of the Jedi.

Those are a few of the revelations we got from the cast and creators of the animated series when we caught up with them this week at the Television Critics Association winter press tour. (Spoilers ahead!) 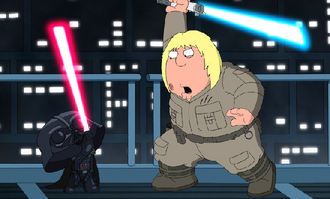 The upcoming third installment of the Family Guy Star Wars spoofs—called I've Got a Bad Feeling About This—takes humor to a new low when it drops on DVD and Blu-ray in December.

Peter Griffin's Han Solo gets unfrozen from carbonite with a scatological joke. "As I recall, it's during the scene in which Princess Leia thaws out Han Solo from the carbon freeze in Jabba's palace," said Family Guy creator Seth MacFarlane. "He's got a fart that's been brewing for some time."

Bad Feeling actually went so far in its initial cut that even MacFarlane thought the jokes needed to be reined in. A bit.

"There was a scene in Bad Feeling that got cut out of the final," MacFarlane said. "When they're on the moon of Endor, and Han and Leia and everybody capture the imperial guard that's inside the shield generator, they bring them outside and force them to dig their own graves. I think at one point Peter says, 'You, suck his d--k while you're digging his grave.' That obviously got cut out, because Family Guy really is a show that likes to be family-friendly."

When the Star Wars spoof trilogy is complete, MacFarlane has his sights set on another sci-fi milestone: Can you imagine the Griffin family as the crew of the Enterprise? "We would love to do Star Trek II," MacFarlane said. "That's the next one we'd like to do."

The weekly series of Family Guy has had sci-fi touches too, as when they reunited the entire cast of Star Trek: The Next Generation as themselves. MacFarlane revealed that an upcoming episode substitutes the Family Guy opening theme for a spoof of a '70s classic.

"We have our Incredible Hulk opening coming up," MacFarlane teased. 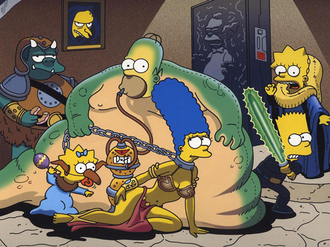 The Simpsons' next "Treehouse of Horror" Halloween episode includes a bit that nails the vampire craze, pun definitely intended.

"We have a catch-all vampire segment where Lisa falls for an 8-year-old vampire voiced by Daniel Radcliffe" of Harry Potter fame, said Simpsons executive producer and show runner Al Jean. "We mention Twilight, but it's far from being just Twilight. Vampires, this is like the biggest they've ever been. We do True Blood. The premise of it is that there's a Twilight-type kid, an 8-year-old whose father is like Bela Lugosi, so they really don't get along. The dad bonds with Homer. We also have Count Chocula, the Count from Sesame Street ... we have all the vampires in the segment."

Another Halloween segment springboards off the premise of Jumanji: Bart and Milhouse play a game that brings all their boardgames to life, and they rampage through Springfield.

Futurama promises to be smarter than ever 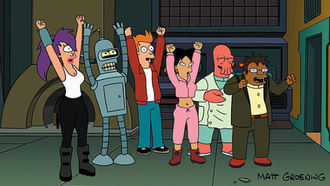 Katey Sagal, who provides the voice of Leela, said to expect the funny when Comedy Central brings back Futurama for 26 new episodes, of which she's recorded 12 so far.

"It is so funny," Sagal said. "I can't wait for people to see it. I've always thought the writing is amazing, but this year it's hysterically funny."

"Futurama is the show that keeps threatening to die, and then the fans just won't let it," Sagal said. "I don't know if that just spurs on the writers even more or if they just have free rein. There's such good writing, so I think people will really be happy."

In the latest episode she recorded, Sagal said that Leela's parents show up. (We last met them in the season-four episode "Leela's Homeworld.") "You know more than me," Sagal joked. "We revisit Leela's parents. That's pretty good."

The DVD film Bender's Big Score came closest to allowing Fry and Leela to get together, and Sagal said there's still hope for them in the new season. "There's always hope for her and Fry," Sagal said. "It's an ongoing struggle, but they keep trying to make it work. They continue."