An upcoming series of Star Wars: The Clone Wars episodes promises to fill in the backstory of the young Boba Fett, the bounty hunter introduced in The Empire Strikes Back, the show's creators told us at WonderCon. (Spoilers ahead!)

"I wanted to ask the question: How does he become that guy?" supervising director Dave Filoni said in an exclusive interview in San Francisco over the weekend. "Much like George [Lucas] did with Darth Vader, but Boba's path is already set kind of in a much more direct way than young Anakin, because he saw his father die firsthand at that very early age [in Star Wars: Episode II—Attack of the Clones]. How did that affect him? How does that raise questions about the clones that are around him, because they look like his dad? He's a clone, but does he feel like a clone?"

Attack of the Clones explained that Boba was a clone of Jango Fett, with aging slowed down to appear as his son. Now the animated series shows how female bounty hunter Aurra Sing became an important figure in Boba's adolescence. "How does Aurra come in, and what is she doing mentoring him, and what is she asking of this kid?" Filoni said. "Why does she want to work with the kid? Does she see something of herself in him? These are all things that we discussed when we were building to the characters to put into the story."

To voice the animated form of Boba Fett, Filoni got Daniel Logan, the young actor who played Boba in Attack of the Clones. Logan's a little older now, but he's still young Boba. "It was kind of like putting on a pair of boots that you haven't put on for a long time, and trying to fit an 8-inch foot into an 7-inch boot is kind of different," Logan said. "My voice got a little bit [deeper]. I started getting hair on my chest and all the rest of my body, and something happened."

Filoni said Logan's voice still preserves the qualities he needed to portray young Boba Fett. "The voice worked well, though, I think," Filoni said. "When you listen to Daniel as young Boba, it's still young Boba. I think that's the cool thing. Boba Fett iconically is the helmet. We know the helmet. We don't know the guy underneath. So Boba Fett in the prequel era is Daniel. He is that boy. I think that's why it was so important to get him back. If you had somebody else do it, it would just look like him. This time, I think, it really just feels like him, because Daniel's portraying the character."

As bounty hunter Aurra Sing, voice actress Jaime King got to play a vital role in the creation of a Star Wars legend. "Just imagine a very intense bounty hunter like Aurra Sing mentoring Boba Fett as a dark, motherly figure," King said. "That's where it gets really interesting. It's kind of like Mommy Dearest. I grew up with movies like that. Then, all of a sudden, I come across Aurra Sing, who has this dark, motherly quality about her. You get to see that it's really not about taking care of someone at all. It's really just about taking care of herself. It's very fun as an actor to explore those kind of weird things that I don't necessarily relate to but in a way I can explore and understand just through delving into the character. She has very clear intentions on what it is that she wants, and it's not bound by emotions, and it's not bound by things that most females get bound by. It's just really about money, and it's about power. She'll basically do anything to get that. It's fun to be able to play a character like that, that's so single-minded but so manipulative in achieving her desires." 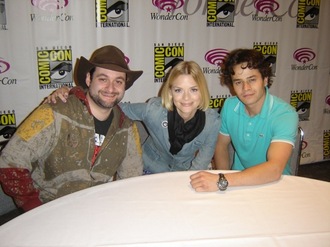 Mommy issues were the way to go with Boba. He had a father figure in Jango Fett, and he's surrounded by male clones. "I mean, he's a clone, so that sets Boba in a different light," Filoni said. "He's one of millions of kids who look just like him, but in his mind, he's his father's only son. He's the one that's special. He's the one that grows differently. In that way, too, with Aurra, she takes him on. Why? Was she a friend of Jango's? What's in it for her? We ask that. It was important that she be somewhat motherly to him, but also she is an adult and she has her own motives. I think she sees a bit of herself in Boba when she was young, when she was kind of on her own, abandoned."

Filoni doesn't answer all the questions. He still wants to keep Boba Fett a little mysterious, like Clint Eastwood in his Man With No Name westerns. "I think it still maintains the mystery of the Man With No Name that Boba Fett's very much based on, because there aren't really definitive answers, I think," Filoni said. "Boba Fett in Empire seems different to me. Even as a kid, I thought Boba's a villain, because he's taking down Han Solo with Vader, but he's paid. He probably needs the money. Jango Fett has a famous line: 'I'm just an ordinary man trying to make his way in the galaxy.' You kind of get that Jango feels that justifies what he's trying to do, trying to make a means to an end, trying to pay the bills. He's that guy. How did Aurra influence Boba for good or for bad to become the Man With No Name, with kind of his own sense of justice, his own sense of law at a time when the Empire is the law? Those are some interesting questions."

Boba Fett first appears in the April 23 episode of The Clone Wars, then again in a two-part season finale on April 30 on Cartoon Network.