Some Star Wars fans are nerding out right now. They saw the Star Wars: The Rise of Skywalker teaser trailer, and all they can think about is analyzing every frame of those glorious two minutes and three seconds.

Stephen King now 'apologizing' for The Stand, talks his fictional quarantine picks
John Krasinski opens up about 'The Office' lesson he was able to apply making 'A Quiet Place' films

But it was all over so quickly! What should we do about that? Recap those questions, maybe? Act like we're on my deviantArt page, user name "KyloSmoothChest69?" Here's my latest journal entry, I call it "A list of things Stephen Colbert and the cast and crew of Star Wars: Episode IX — The Rise of Skywalker said that made the world's pants very tight." It's a long title. A work in progress. But then again, aren't we all?

Turn down the lights, my Star Wars babies. Get into your best '70s futuristic velour onesie, turn up the bass on your fave John Williams track, and let's do this nasty thing.

Let's start simple and build our way up, shall we? Colbert asked John Boyega if Finn, who Boyega refers to as a "sexy young man," is "the galaxy's most eligible bachelor."

John Boyega says, "I think he is. Period. Point blank. Finn is single and willing to mingle."

It's so hot how these two men know they can say these things and not instantly have their careers go down in flames like so much Hindenberg, isn't it?

Related to Finn's single status, Colbert spoke with Kelly Marie Tran, who, as you might remember, plays Rose Tico. Remember that time in The Last Jedi when Rose saved Finn's life? Pretty hot. Also they kissed which was also very sweet and pure.

Colbert has clearly been thinking about that for the last 16 months, as he asked, "Do you kiss Finn again in this movie?"

"Look, all I'm gonna say is that Finn is a very eligible bachelor. Much like John Boyega," Tran responded. I mean, girl, okay, wow. Go off. Detect the lie. You can't.

But that wasn't enough for Colbert. "Is that a yes or a no, and please say yes? I hope you say yes or else I have a lot of fan fiction going in the shredder," he insisted. Wow, Stephen, damn! Get a room! And a deviantArt page. Reminder: "KyloSmoothChest69" is already taken.

Colbert asked Isaac of Poe Dameron, "Is everything a joke to him?" Isaac's response: "I think he takes his love for Finn very seriously."

And just when you thought the visceral Stormpilot shipping was concluded ("Stormpilot" is the ship name for FinnPoe, just FYI), Colbert also asked Isaac, "What does Poe do after the war is over?" And if you guessed that Isaac said, "Finn. He does Finn. All day and all night," then you would basically be right. What Isaac actually said was, "He seeks a bit of that adrenaline, so he'll have to find it ... somewhere." It is at this point that Isaac and Boyega locked eyes. I mean ... who needs a movie trailer, honestly?

"Daisy, what's up with Rey and Kylo Ren?" Colbert began. "Do you have any more Force visions of him semi-naked?"

Jesus H. Kenobi Christ, take the wheel. "I think I can confirm there are no more semi-naked Kylos," Ridley successfully navigated before the whole room erupted. "Unfortunately."

Oscar Isaac: "Only full. Only fully naked. We had to take it up a notch, guys."

Are we done? No. "Since Adam [Driver] is not here," Colbert said. "His chest in Episode VIII: did he wax, because he's completely ... is that a Brazillian? He's a big man! Not one hair on his chest!"

"When he turned around, it was surprising to the crew as everyone," responded Ridley. Oh, no. Ridley, don't you get in on this, too! "He's a big man. Yeah ..." GOD DAMMIT.

It is at this point in the panel that the camera literally, and this is actually true, cut to BB-8 staring off into the GD middle distance. And I know what you're thinking, little droid, and I already told you "KyloSmoothChest69" IS ALREADY TAKEN!

Did I forget to mention that immediately after this, Colbert said, "Talk to me about his lightsaber?" TALK. TO ME. ABOUT. HAHAHAHA. Yes, Stephen. I, too, saw The Last Jedi. I, too, also, in addition, saw how high-waisted Kylo's pants were. Perhaps, in an alternate universe, we could have seen the outline of his ... lightsaber.

I'm saying that Colbert is talking about Adam Driver's penis, did that come through? Good grief, the thirst on the dais was off the charts.

But nothing, and I mean nothing, compared with when J.J. Abrams introduced the latest droid on the team, D-0. That little weird conical dick on a wheel rolled out on stage and the $#@! that came out of that dude's speaker box? I'm not saying, I'm just saying. It's a good thing no one was there to translate. That guy's a huge pervert, though.

Anyway, that's it. I guess after that they showed a trailer for Star Wars: The Rise of Skywalker, but I'm pretty sure everyone in the audience had already risen so hard that they were passed out by the time we saw Lando on screen or whatever. Are you awake now? I guess watch the trailer? Smoke 'em if ya got 'em? I'm spent. 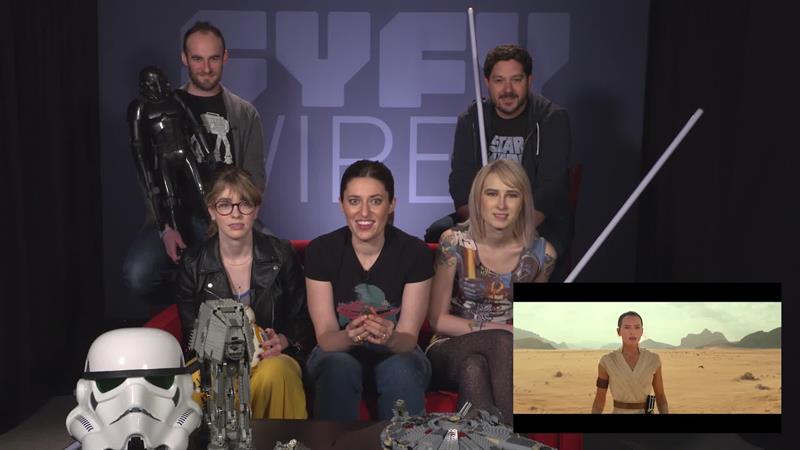