Star promises that new Merlin will be deeper, darker

Even if you haven't seen season one of the British series Merlin, actor Colin Morgan promises plenty of "swashbuckling" adventure that the entire family will enjoy in the upcoming second season. And for those who have seen it, Merlin promises to dig deeper into the characters, show new sides of the story and get a bit darker. (Merlin premieres on Syfy tonight at 10 p.m. ET/PT.)

"The great thing about going into the second [season] is it ties up in terms of storylines where we left off on the end of the first [season], where Merlin's relationship with the dragon had changed drastically. We get really stuck right into the action at the start of the second [season] with a kind of Raiders of the Lost Ark-type opening," the young Irish actor said in an exclusive intervew. "Which is great. It just gets kicked off full force with them."

Colin Morgan, NBC's Merlin, on talking to dragons and casting spells
Merlin's Colin Morgan: Season 4 changes 'everything and everyone' 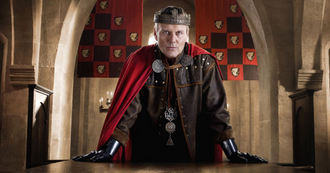 Merlin focuses on what might happen if a young Merlin, before he became a great wizard, met a young Prince Arthur, before he became king. And, oh yeah, Arthur's father, King Uther, has outlawed magic under penalty of death. The BBC series premiered in 2008 in Britain and stars Morgan as Merlin and Bradley James as Prince Arthur, along with Katie McGrath, Angel Coulby, Anthony Head, Richard Wilson and John Hurt as the dragon.

In the first season, "Merlin was thrown into this crazy world of Camelot. He was an innocent. He very much was learning and is still learning, as we all do throughout life, but he's definitely a bit more assured of himself now. One of his character traits is he's very trusting in people. He wants to see the good in people," said Morgan. "Even though he's thrown in so many situations that have told him definitely [people aren't always good], he wants to see the good. And I think that's why he sort of triumphs in the end, because he does strive for the goodness."

In season two, Merlin will find himself not only at odds with the dragon, who helped guide him (if cryptically) on his journey toward his destiny to protect Prince Arthur, he will also find many other challenges ahead. In fact, according to Morgan, the series has gotten darker in tone. Not to worry, though, he promises, when it comes to the lighter aspects of the series. "I think, strangely, the writers, they're able to explore darker areas, but with a strange charm the show will never lose."

"As we see in [season] two, [the King's ward,] Morgana, we're seeing the contrast with her. She has a gift that Merlin has but is choosing a very different path. It is good to see that contrast of how having those powers can be used in very different ways," he said. 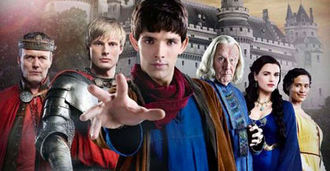 "What is great in the second [season], Merlin's thrown into a bit of a dilemma. You know, Morgana's powers come to the fore, and she ends up turning to him in a certain way, and he's thrown in a very interesting dilemma. Would it be a better position for him to have someone to speak to him and for her to speak to? He's seeing her going through the development of her powers, coming through and having no one to speak to and being very much alone, as he was. Does he tell her he has magic? What would be the implications of that? Would it be a good place to be if he did have a friend to depend on? Because Merlin, really, he only has Gaius [Wilson]. He has no one else. So it's an interesting dilemma for him. There is a great development in the relationship between Morgana and Merlin coming up."

Season two will also dig into Merlin's past, and "we also see Merlin's first love come into the play. We see him go through that. So we're seeing him go through things and emotions that he hasn't felt before. Not just in a magical way, but in a really, really strong emotional way as well. He has to go through a lot of tough things in the second [season] that would test anybody's strength and willpower, let alone someone living in a world where the one thing you're good at is the one thing you can be killed for," said Morgan.

Beyond that, there will be the beginnings of Arthur and Guinevere's journey to become the king and queen of Camelot. "But as yet Gwen [Coulby] is still a serving girl, and Arthur's the young prince. It is hard to imagine how they are going to end up together. Steps are very much taken towards that."

While Morgan feels Merlin grew up quite a bit during season one, "there's things that happen in [season] two that will change him forever. Going into the third [season] now has shown me by the end of the second [season] that he's a changed guy."