Check out 20 awesome Stargate props that could be yours!

Hey, Stargate fans! Want to own a piece of your favorite show? Then you're in luck, because Propworx, who was also behind 2009's Battlestar Galactica auctions, has launched a series of Stargate Artifacts auctions this week. Fifteen seasons of Stargate SG-1 and Stargate Atlantis memorabilia will be up for sale through eBay and two huge live auctions.

There will be thousands of items auctioned off over the next few months, culminating in two live auctions in which you'll even get a chance to see a full-size, working Stargate. But even before those live auctions, Propworx will be auctioning plenty of affordable items on eBay, including costumes, props and even pieces of the Stargate.

You can find out more about the eBay auctions and what will be for sale at www.propworx.com, where the Stargate fans who make up the Propworx team have blogs, videos and a forum for fans and collectors to discuss the Stargate auctions.

So what are some of the best props that Propworx will have in the live auctions? The crack group at Stargate Command (aka the Propworx warehouse) made a list for us of the top 20 items they have stored there. (Click on any prop to view at a larger size.) 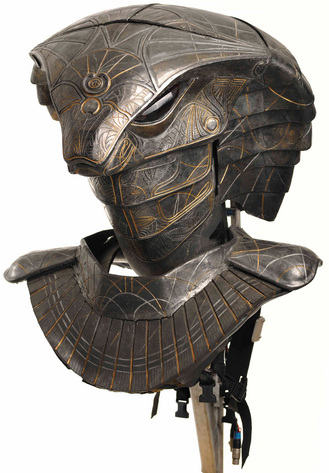 Apophis' legion of Jaffa warriors could be identified by their serpent helmet heads, and no Jaffa was more significant than Teal'c, First Prime of Apophis. This helmet is special because it uses compressed air to open and close. The eyes also light up. Actor Christopher Judge wore this helmet in the SG-1 pilot episode "Children of the Gods," as well as flashback episodes such as season one's "Cor-Ai." The helmet is made of fiberglass and metal and is one of the most impressive props in the auctions. 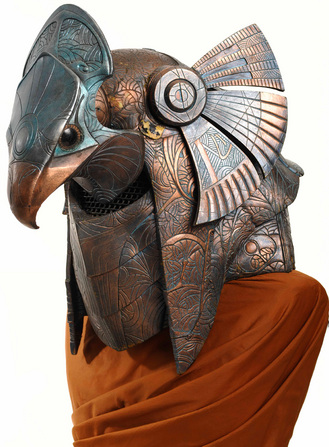 Horus guards served the family of Ra, which included his wife, Hathor, and son Heru-ur. These impressive helmets were introduced in the motion picture, and unlike the Anubis head were carried into the television series. The complex animation of the head opening and closing in the feature was often cost-prohibitive on the TV series, but nevertheless they did it twice, in season two's "Secrets" and season eight's "Moebius, Part 1." This is a rubber stunt Falcon Head, beautifully painted and used in SG-1. 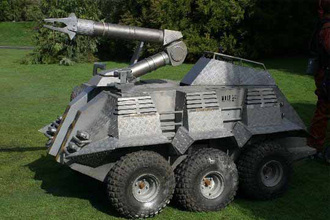 The Mobile Analytic Laboratory Probe was the remote extension of Stargate Command. Equipped with a grappling arm and a communication dish, this six-wheeled device was sent into environments beyond the Event Horizon that were unknown or hazardous. This complicated piece of hardware, created by Stargate's effects department, includes a remote control for moving forward, backward or turning on a dime in any direction. Over a decade old, the MALP runs as well as the day it was made. 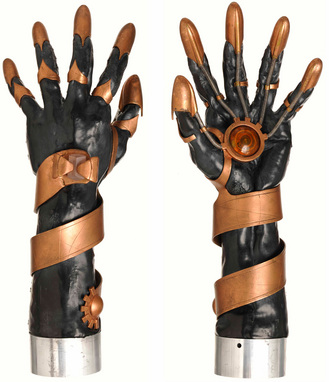 This prop is the TV evolution of a similar device introduced in the feature. A powerful weapon, the hand device (or "ribbon device") is the preferred method of torture for the Goa'uld, who relish "throwing" their prey across rooms or placing them in a trance and melting their brains. This prop is metal and resin and mounted on a molded hand for display. It is the only one remaining.

No weapon is more terrifying to innocent villagers than the powerful staff weapon. Powered by a small amount of liquid Naquadah, the staff fires large bolts of yellow plasma. Teal'c carried it as his weapon of choice for 10 seasons of SG-1. This is a full-size resin staff weapon, one of only a few remaining. 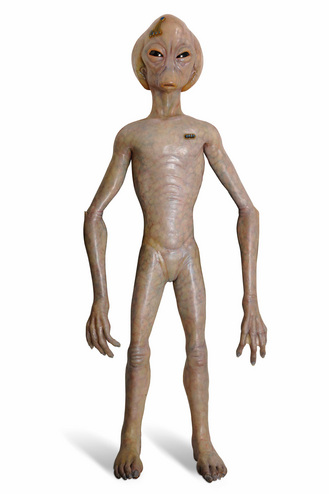 The supreme commander of the Asgard fleet, Thor represents humanity's most powerful ally. Thor's race endowed humanity with its wisdom and most powerful technologies to help stop at least three powerful foes, including the Goa'uld, Replicators and Ori. This is the Hero Thor puppet. It is in amazing condition, and the best surviving example of the puppets used for Thor and his race.

Bugaboos sunglasses were the glasses of choice for the SG-1 team leader when traveling offworld. O'Neill and his teammates often wore these on sunny worlds, but Jack is most commonly remembered for wearing them. This is a hero pair of sunglasses and probably the most recognizable Jack O'Neill prop. 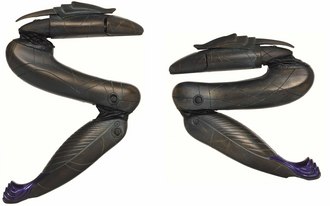 In addition to a staff weapon, most Jaffa also carry this sidearm. The Zat'ni'katel is an energy-based gun that stuns with one shot, kills with two and disintegrates with three shots. Jack O'Neill shortened the name to "zat gun" in the SG-1 season one finale, "Within the Serpent's Grasp." This is one of the rare working Zat guns that works using compressed air to open the gun. It is made of resin with working mechanicals. 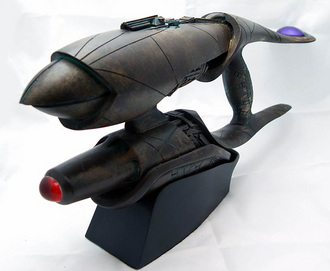 The Trans-Phase Eradication Rod was developed by the Goa'uld to detect beings 180 degrees out of phase from our spacetime, including the insectoid "Re'tu" race and other cloaked enemies. Once a foe was sighted, the T.E.R. released a form of energy similar to the zat gun but far more destructive, ripping a target into pieces. Since creatures like the Re'tu were left out of phase even after death, the T.E.R. offered the convenience of not having to clean anything up. This is a hero resin, light-up T.E.R. 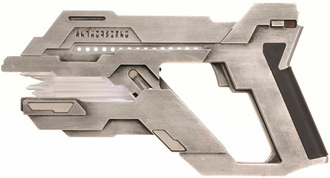 The Asuran Replicators were nothing if not emulators of their Ancient creators. So it was with the Replicator pistol, an energy-based weapon charged with powerful crystals. Ancient writing on both sides of the pistol translates to "neutralizer." This is a beautiful metal prop with light-up electronics. The detail and workmanship are really impressive.

A reverse-engineered version of a piece of Ancient technology, the Anti-Replicator gun, or A.R.G., is the most practical choice in dealing with human-form Replicators. More sophisticated than their "block" brethren, human-form Replicators are bound together by millions of nanite cells. The A.R.G. separates the bonds between these cells, making them totally inert. What remains is a lump of fine metal bits. This is an amazing resin and metal prop with a working switch that lights up the gun.

The Ark of Truth 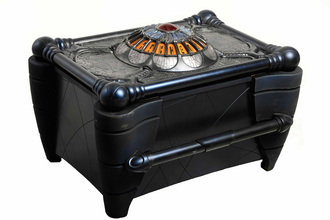 The Ark of Truth is one of the earliest known pieces of Ancient technology. Older than the name "Ancient" itself, it was developed by the Alteran Amelius (the inventor of the first Stargate) to combat a tyrannical body of his own people by brainwashing them into believing his "truth." The group he banned ultimately buried the Ark (believing that by using the device they would become the very enemy from which they sought to liberate themselves) and traveled to the Milky Way to seed our galaxy. Millions of years later, SG-1 would use the ark to stop the very same threat. A beautiful wood and resin prop with detailed Ancient writing around the top.

The nerdy Dr. Daniel Jackson would not be complete without his round glasses. Despite taking the most naps inside a Goa'uld sarcophagus—and even ascending to a higher plane of existence at the end of SG-1 season five—the good doctor was never able to improve his eyesight. Unless he was on an undercover Tok'ra mission, or existing as pure energy, the archaeologist could always be found wearing these. This is a Hero pair of Daniel's glasses.

The Priors of the Ori used their staffs to concentrate their powerful mental energy and communicate over vast distances with others of their kind. Given advanced knowledge of the universe by their Ori leaders, the Priors focused themselves with the crystals in their staffs to create awe-inspiring "miracles." This is a resin, metal and crystal full-size prop that lights up.

Perhaps the most powerful weapon in the Ancient arsenal, the Ancient drone weapon is also one of the most mysterious. The drone appears to be a hybrid of organic and inorganic components. When activated, it can plough through numerous targets before becoming disabled. Jack O'Neill used thousands of Ancient drones to destroy the Goa'uld Anubis' massive fleet of motherships in the SG-1 season seven finale, "Lost City." This is one of the most amazing props to be auctioned. It is incredibly detailed, with plastic components and detailed "tentacles."

The Zero Point Module is the cornerstone of Ancient energy. In use during the "golden age" of the race 10,000 years ago, three of the devices were powerful enough to carry an Ancient city-ship from one galaxy to another in a matter of days. The Pegasus Galaxy Replicators, who based their civilization on their Ancient creators, continued to manufacture new ZPMs to sustain their society. This is a Hero resin ZPM.

Believed to have been developed by the nomadic Travelers, Ronon's blaster releases a powerful form of energy. Three crystals on the side indicate the mode in which the blaster is toggled. A power cell at the rear replenishes the weapon. Ronon obtained the weapon while he was a Wraith Runner and wove the hair of his nemesis around the handle both to improve his grip and to truly make it his own. This Hero resin prop has a light-up energy module, and the handle is wrapped with rope to simulate Wraith hair. 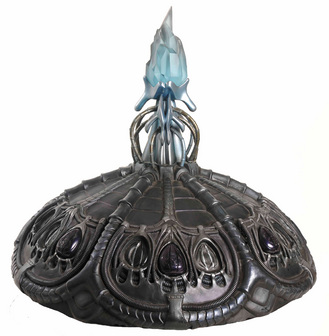 One of the earliest known pieces of Ancient technology, the Communications terminal is the docking station for small communication stones. When connected, the user of a stone can link psychically across an almost limitless distance to a person using a similar device on the other end. Earth eventually reverse-engineered the terminal into a much more compact "box" that Icarus Base team members now use to communicate back home while aboard the Destiny. This is a detailed resin prop with attached "stones" and a large "crystal" on top. It is almost 2.5 feet wide. 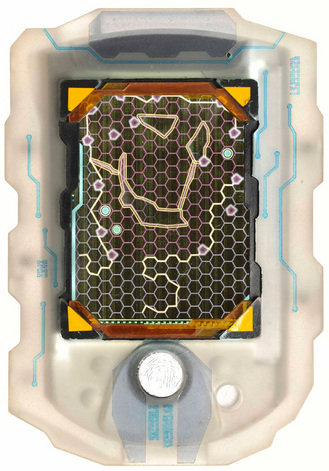 A palm-sized computer of Ancient design, capable of detecting a wide variety of life form readings, from Human to Wraith. Col. John Sheppard and his team used one such device to hunt down a number of foes. When Atlantis was taken over by the Genii during a hurricane, Sheppard hunted Acastus Kolya's soldiers with the lifesigns detector, eliminating each one while suspended above in the dark rafters. This is a working hero prop that actually has a standard terrestial PDA inside a plastic frame with added graphics. It lights up, but it doesn't actually track anyone!

The Athosian Teyla Emmagan's workout regimen often included practicing martial arts with bantos rods, a pair of fighting sticks crafted by her people. Teyla practiced using them against both her fellow Athosians and Atlantis personnel. Early in the Atlantis expedition's mission, Teyla tried teaching Col. John Sheppard in the art of using bantos rods, but all but gave up on him when he refused to spend time practicing. These rods are rubber-covered wood, so they are durable but won't hurt anyone if an actor misses.

You can find out more at www.propworx.com and join the conversation there. You can also follow Propworx on Twitter.