Are you ready for a new Phantom with a new suit and a new attitude? Syfy is reimagining the iconic comic strip in The Phantom, an original four-hour miniseries that brings a new look to the seemingly immortal superhero.

Ryan Carnes takes on the role of the young law student who discovers that he's actually inherited the job of becoming crime fighter Kit Walker, aka the Phantom, via a lineage that's been going on for 400 years. Kit has to leave everything he knows behind as he trains to become the next Ghost Who Walks. Syfy's The Phantom also stars Isabella Rossellini, Sandrine Holt and Cameron Goodman. The miniseries airs in one night this Sunday beginning at 7 p.m. ET.

We got a chance to chat with Carnes and Rossellini as they revealed seven secrets about the new miniseries, including why Rossellini loves playing it evil, the scoop behind that new black suit and more. Plus we've included a BONUS secret involving a brand-new Phantom comic-book series.

The awesomeness of playing the Phantom 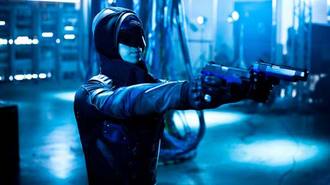 When it comes to taking on the lead role as Kit Walker, Carnes calls playing this origin story for Phantom his "dream role."

"I really like to find characters that have something to say, that are not two-dimensional ... that have a really great arc," said Carnes. "And obviously, in this show, I mean, what an incredible treat to be able to play this character. He has a fantastic arc—a huge arc. He goes from [being] a boy in the beginning and he's forced to become a man, as it were, and assume this massive responsibility."

Compared to his past acting gigs on General Hospital, Desperate Housewives and Doctor Who, Carnes said playing Kit Walker is "a very different kind of role. ... So I guess that's generally what I look for [in a role], is just a character that is able to reveal a part of his soul through his journey." 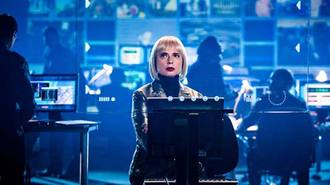 "I love to play nasty," said Rossellini with a laugh, her Italian accent making her sound anything but evil. "It's just amusing. I'm never given many opportunities to play a villain. I usually play the goody-goody. I'm used to playing the good mama, lately the good grandmother."

No "goody-goody" in this miniseries, Rossellini plays Dr. Bella Lithia, who works for the Phantom's archenemy, the evil Singh Brotherhood, and is the head of an experimental mind control program that uses television to brainwash people into doing terrible things.

"It is always fun to play evil. Frankly, it doesn't take much of the Actors Studio to play a character that is a symbol of evil. ... The ambiguity of maybe somebody who is sexy but repelling at the same time. So you want to make sure the makeup is beautiful, so the blond wig. You can create with the costume designer and makeup people and imagine using yourself as the base that might be surprising or striking, and then we go from there. It is very pleasant. I'm always surprised that I get paid, because it is so much fun to be an actor. It's extraordinary."

The purple suit is out 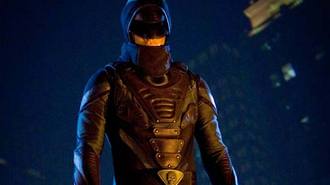 "I'll tell you what, this is a point of great contention among the fans," said Carnes. "You know, a lot of them, I've gotten the impression that they really, really loved the old suit. ... I've never put on the purple spandex, so I can't speak as to how that feels. I would imagine it feels tight and vulnerable."

While the Phantom wasn't the first superhero to wear a costume back when he was created by Lee Falk in 1936, he was the first to wear a skintight suit with a mask that leaves him with no visible pupils. While the purple suit is given a nod in the miniseries, Carnes' Kit Walker puts on a modified black suit that makes him impervious to bullets and blades and gives him two and a half times his own strength and speed.

"I can speak to how it felt to put on the new suit, and that was really cool," said Carnes. "There was a process in terms of going, when I first arrived in Montreal, going to the fittings and all that with the costume designer, and so I sort of knew what I was in for. But it wasn't until I finally, actually put the whole thing on that I went, 'Okay. Wow. This is pretty rad. I could get used to this.'" 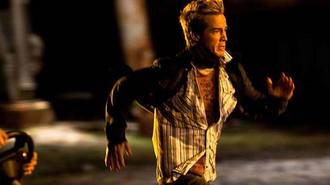 Without a doubt, Carnes' biggest challenge was the three weeks of nights they shot about two-thirds of the way through the production. "My co-star Cameron [Goodman], she told me she did a horror movie one time that they did like three months of nights, and I can't imagine that," he said.

"I think I might have lost my mind. It was challenging, because I was already far enough into the role that I had sort of begun to walk around ... as Chris and Kit anyway, and sort of lost track a little bit of myself. And then mix that in with being on nights for three weeks where, you know, your rhythm is off, your hormones change. By the end of that three weeks I felt like a zombie. I mean, I felt like I was in like a zombie movie."

It's a brand-new world for The Phantom 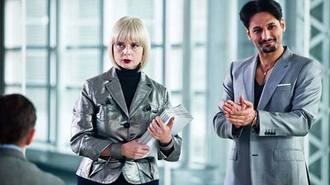 "I thought it was fascinating, the art direction, how they did it visually and how they translated The Phantom into this new world," said Rossellini. "When I saw the images of the old version of it, it was very '30s, very old period. I love art direction and costumes. When I do my own films they are based a lot on that, maybe because of my past as a model. So I always like it to be very stylized. I remember in the room where I have my lab, you know, where I control people. That lab was done so simply ... so simply, and yet it was so stunning. It was done with nothing. It was just an empty warehouse that we shot along the St. Lawrence River. And it was just the way [the art director] hung the light bulbs and the way it was lit. It looked like we were at NASA. I really loved that."

"Sometimes when you know what you are doing you can resolve things simply and, to me, simply and effectively, and that filled me with admiration. But I also thought that [director] Paolo [Barzman] did tremendous work when I saw the film at the end and all the special effects and how he changed the film style to create the past and the present, I thought that was wonderful. You know, when you're on the set you don't realize all that it is visually entertaining to the eye."

Yes, The Phantom could become a series 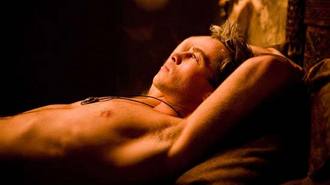 The four-hour miniseries is also a backdoor pilot, which means if it gets good ratings Syfy could decide to make a series out of it.

"At this time we don't know what's going to happen," said Carnes. "We don't know what the fate of the miniseries is going to be. But obviously the more people that watch, the better chance this thing has of getting some legs and getting a following and becoming a series. So we obviously are encouraging as many people as possible to tune in."

Carnes' challenge for EVERY Phantom fan 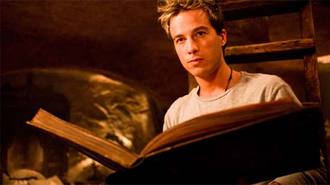 "I would really encourage them to try to go into it with an open mind and attempt to allow themselves to surrender to viewing something that is in some ways an entirely different story," said Carnes.

"It does carry the title of The Phantom. Many of the things are the same. But we really were going out trying to reimagine a story and tell it in a slightly different way and take some risks ... So I would just encourage them just to surrender to what they might see and see if they don't enjoy it. I would challenge them to just watch it with an open mind and just see if they don't enjoy it," he said.

And a BONUS secret: A new comic book will be released ... 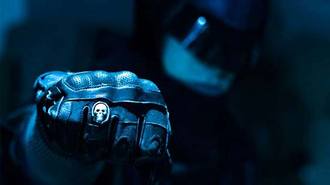 Yep, there's a brand-new comic-book series, The Last Phantom, planned, with the first comic book headed your way in August via Dynamite Entertainment. Alex Ross heads the creative team that includes Scott Beatty on scripting and Eduardo Ferigato on art. In the new series, the 21st Kit Walker has given up being the Phantom and is enjoying life with his growing family.

"The Phantom is one of the first 'masked' heroes to come out of the 1930s," said Dynamite president and publisher Nick Barrucci. "This story is a passion project for all involved. ... This is the journey of today's Kit Walker, who is working towards making the world a better place through the Walkabout Foundation.  But can he escape destiny?  And where will this adventure bring him?"

Here's a video preview of Syfy's The Phantom: