When last we left Syfy's Sanctuary in December, Helen Magnus and her team had just been executed for trespassing in Hollow Earth. For most series, killing off the majority of your characters might be a problem. For Sanctuary, however, death is only a warmup for our intrepid heroes as the series kicks into high gear, beginning tonight, with the show's midseason premiere, "Pax Romana," at 10 p.m. ET.

"The great thing about the second half of season three is that all the things that Magnus and the Sanctuary team have gotten into in the first half really, really come back to the ramifications they have to deal with in the second half," said actor Robin Dunne, who plays Dr. Will Zimmerman. "And it's really quite a roller-coaster ride the second half."

We chatted with Dunne and actress Amanda Tapping, who plays Helen Magnus, about the enigma that is Magnus, Dunne's plan to direct and what season four might bring.

Getting executed is no fun

In the midseason finale, "Hollow Men," Magnus and her team appeared to be executed and their apparently lifeless bodies were left hanging in midair. Shooting that scene was no picnic, said Tapping.

"It was really uncomfortable. No kidding. It was painful after a while. We were in these rigs that kind of pulled up your back and stretched you out in this weird way, and then we had to have our hands out to the side holding onto these little wires that were hanging down, and it really hurt. And in between takes they would run and put apple boxes underneath us so we could take a bit of the pressure off our backs."

"It's one of those things where ... you think about at conception like 'How hard could it be?'" said Dunne. "We've got harnesses on, we're hanging—but then you actually do it and you're like, 'Wow. This is really tiring.' ... On top of that, [director] Martin Wood was pelting us with tennis balls while it was happening." 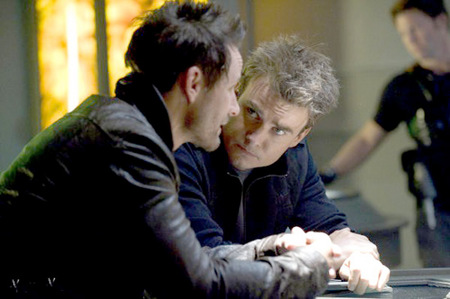 When the series returns with the second half of season three, it will be all about survival for Magnus, Will and the gang. "Parts of the season feel really hand-to-mouth," said Tapping. "After what happens when we come back in episode 311 [aka 'Pax Romana'] the show that will air on April 15th, it's sort of blown the Sanctuary world wide open, and so there's a massive amount of hand-to-mouth survival. And we do a couple of really small, sweet singular episodes within that, but then we just kind of keep getting hit."

According to Tapping, there's "a huge progression or an arc that we're following in the second half of the season. We revisit at the very end of the season what we're dealing with in episode 311, and certainly there's evidence of it throughout some of the episodes. But there's a lot of kind of singular—just getting-whacked-in-the-side-of-the-head-with-a-2-by-4 episodes. So it feels very instinctual and [about] survival."

"It's a crazy ride, and you're going to see us in different times and in different dimensions and [see] the impact that Magnus has had on history," said Dunne. "It is really quite a wild ride. And it's interesting, too, to be at this point talking about it, because the first half is really the lead-up, and the second half of season three really is where things get crazy with Kate."

"It's like at the end of the first half we have this massive explosion, and the rest of the season are the pieces falling out of the sky from that explosion," added Tapping.

"For me, I still don't completely get Magnus," said Tapping. "I find her to be such an enigma. There's so many things about the decisions that she makes that I still can't wrap my head around, and to me that's fascinating as an actor, to try to get inside somebody so complex and so kind of confusing."

She added: "So every time we start up the season, I'm like, 'Oh, I've got to get back inside this woman's head.' And it's so different from the way that I think sometimes that that's the challenge for me. And it's scary, and it's fun to be scared."

The Magnus and Will of it all

For Tapping, their relationship has become "a very level playing field between these two characters. It can be combative. It's hugely respectful. But it feels now like it's a much more interesting relationship to play because they are two equals. I mean, Helen outweighs him in experience, and that's just a matter of course, but he's actually—he sacrificed so much for the Sanctuary, and there's a huge amount of trust between the two of them. And she—I think he's one of the few people who can call her on her stuff," she said.

"There's a nice synchronicity that has formed between the two characters. And really, they're two people that depend on each other for survival. And therefore, that's where the respect comes out of," said Dunne.

In an upcoming episode of Sanctuary called "Normandy," Tapping admits she sports a red wig. "It is true. It is true," she said.

"But that's just for fun," she added. "It's sort of an homage to my grandmother, who grew up in England and lived through two world wars. She was born in 1901 and lived to the ripe old age of 103 and a half. And, her entire life had this red bob haircut and dyed her hair red up until she was like 102, I think. And so, that was in homage to her, but I really liked it. So who knows? I mean, the beauty of this character is she's old enough and has been around enough that she can kind of do whatever she wants."

While Tapping and Dunne often joke back and forth, they both get serious about the "Normandy" episode. "I think Normandy was a big revelation for us. It was something that sounded cool on paper, but we really weren't sure whether we could execute it in a respectful and also in an interesting way, because it was something we were going to try that was totally different," said Tapping.

"We were playing a period that is very real and has a lot of lasting and a very tragic memory for people, but there was a reverence on set, when we were shooting that episode, to being true to the period. To being true to the story. It's our own Sanctuary way into it, but to just really honor that time," she said.

"It's no secret that we're all kind of a bunch of goofballs over here, and we like to joke around and laugh, and we do have a great time and play silly jokes on each other, and we're constantly laughing," said Dunne. But shooting "Normandy" was different. "I think it was just a reverence for the material, and just recognizing what a huge accomplishment that episode was. ... It was just one of those where it kind of snuck up on us, and that's the revelation. When the emotion sneaks up on you and you go, 'Oh. Oh wow. Okay.' It's beautiful when that happens, and we're very lucky that we were open to that, or that we're allowed to experience that."

The return of the Five 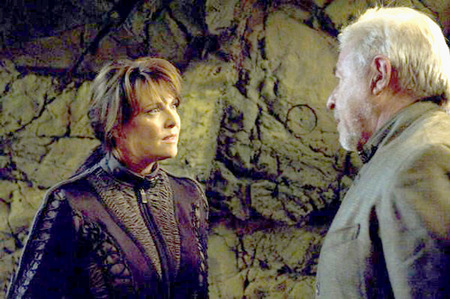 Yes, we will see more of the Five, said Tapping. "There are a couple coming up in the second half of this season. 'Normandy' in particular brings back the Five in a really, really cool way. 'Awakening' is an episode where we have Jonathon Young, everyone's favorite vampire. And our second to last episode, 'Into the Blue,' brings back Druitt in a weird way. ... The one that probably speaks to the Five the most is 'Normandy.'"

While there's not a lot of info about where the season-three finale (which is 10 episodes away) is going, WWE Superstar Edge will guest-star. Dunne faced off in the episode with the huge wrestler, who plays an abnormal named Thelo.

"He's enormous," said Dunne. "I had an entire day of just having the crap beaten out of me by him. And after every take, and you've got this big imposing guy on camera ... he's like throwing me around and punching me and clotheslining me and all kinds of stuff. And then [creator] Damien [Kindler], who was directing that episode, would call 'Cut!,' and then he'd come over and be like, 'Oh, man. I'm sorry.' You could tell that he almost felt bad about it. And yes, it was a lot of fun. He was a sweet guy."

Yes, there will be a fourth season 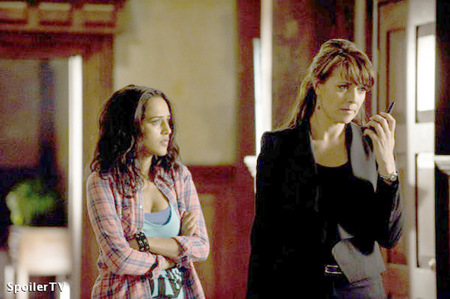 Syfy recently announced that they've ordered a fourth season of the series with 13 episodes. That's down from the third season's 20 episodes, and that's okay with Tapping, who's also one of the show's executive producers.

"Honestly, I think 13 is a good number for us. Twenty was really hard. It was a great joy because we were able to flesh things out more. And I think had we been given more lead-up to starting our season, although we had a network pickup early. We are a little independent television series that needs to get its financing together," she said.

"We really only had five weeks to prep this entire season. And if we were doing 20, I think we'd all be in an insane asylum by now. Thirteen was like, we can do 13 with five weeks. There's no way we could've been prepared for 20. ... Thirteen will keep us all sane."

So what can we expect from a fourth season? Well, Tapping has some ideas about where she'd like to see Magnus go. "The Hollow Earth story line is still being dealt with in season four. And the arcs are now more prevalent because we have more to draw on from our past. We now have 46 episodes of stories, and it's impossible not to find them interweaving. So there will be arcs in our 13-episode season four, but it's more tied into what we've done in previous episodes that keeps coming back and hunts us."

Tapping will direct an upcoming episode called "One Night," which is a heavy Will episode. But Dunne has thrown his director's hat into the ring also. "I believe I will be directing this season coming up. The episode six of season four I will direct, and I think that completely terrifies everyone involved in the show. But yes, it's going to be exciting. I plan to show up every day to work in a bathrobe and use a megaphone to shout out my directions," he joked. "I think that'll just be a good way to get everyone's attention."

When Robin asked if he could direct an episode, "it was like, 'Of course.' This is what we do. And there's a massive support network, but I think he'll totally rock it," said Tapping.

The little show that could

"It was this little web series. It's always been a struggle, and I think through that struggle, the relationships were forged even more strongly. And there's a huge amount of trust on this set because we all kind of jumped into the fire holding hands together. And so the coolest thing is coming to work and seeing 70 smiling faces who all want to be here, and feeling a collective ... I don't know. A sort of collective consciousness to make this show really good," she said.

"Everyone is committed. Like the location guys care about the script. Everyone's reading the script and everyone cares about what happens, and people help each other. It's a very special vibe here."

"Everyone is committed, and everyone should be committed," joked Dunne.

Sanctuary will air on Friday nights on Syfy at 10 p.m. ET.

What 11 Stargaters have been up to since the series ended
Amanda Tapping lands recurring role on Supernatural (but as what?)

Are you ready for more Sanctuary?