Old pics are cool. They're cool because sometimes we get to see something quite extraordinary and totally unexpected—like this old black and white photograph of the time Matt Smith's 11th Doctor hung out with one of the greatest bands of all time, the Beatles. For "real."

The uncanny old photograph has been unearthed by TARDIS Junkyard and shows the Beatles during a jamming session while someone who looks eerily like Matt Smith (in his 11th Time Lord guise, no doubt) is looking on. 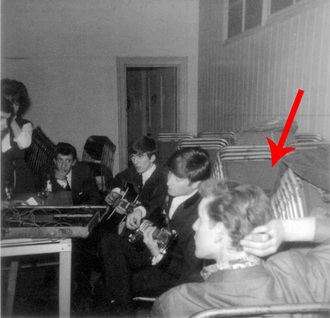 The pic was so awesome that Doctor Who showrunner Steven Moffat commented on it on Twitter. Here's the exchange:

There you have it. A perfect explanation for how that pic even exists in this dimension of Time and Space. Now Steven Moffat has no choice but to do a Doctor Who-meets-the-Beatles episode (which is something that was once discussed by Neil Gaiman himself) with Matt Smith as the 11th Doctor since Smith's ALREADY BEEN THERE, obviously. Right? We're all believers here.

So what do you guys think of that awesome pic? Are you now convinced Matt Smith's a bona fide time traveler and has some wibbly-wobbly, timey-wimey powers of his own?

(via The Mary Sue)