If we were on an episode of the Family Feud right now and 100 people were asked, "Who is the character you most associate with comic books?", you can bet Spider-Man would probably be number one. Steve Ditko, who co-created the character, though, just doesn't care.

It's a well-known fact that Ditko is the J.D. Salinger of the comic book industry. He's the kind of recluse who doesn't exactly like to open up about his experiences as an artist for Marvel comics. That doesn't mean he never responds to fan questions, but it does mean you won't necessarily get the kind of answer you want.

Andrew Garfield responds to that alleged 'leak' of him on set of Spider-Man: No Way Home: 'It's a Photoshop'
The Boys' horrifying sex scenes are part of a gory history of deadly super-powered sex

Case in point: One fan wrote a letter (like an email, but on paper) to Ditko asking him what he remembered about designing Spider-Man's costume. His response was perhaps not what you would expect, even from a guy who infamously doesn't like to talk about his work. 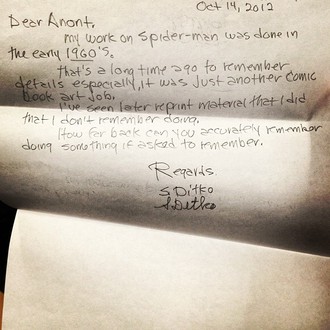 Just another job?! Can't even remember some of the issues?! All right, let's breathe for a second and think things over. Ditko's not wrong—the '60s were a long time ago. Some of us don't even remember what we ate for breakfast last week! Probably also worth noting that, despite Spidey being one of the most popular comic characters ever, Ditko was paid a very low page rate to draw him way back when.

Still, you'd think maybe Ditko would recall something, anything, about the character design for Marvel's #1 guy. After all, if you ask almost any creator about how they came up with any of their characters, chances are they'll go off on a ten-mile tear about it.

Tell you what, though—if you asked the same question about Mr. A or The Question, we bet he'd give you an answer.