Uh-oh! Get ready for more deaths in the new season of Spartacus

Steven S. DeKnight is about to kill off more beloved characters in his bloody new season of Spartacus: Vengeance, which premieres tonight on Starz, and he's not about to apologize for it.

"On this show characters literally get the ax. I think, really ultimately for me, it comes from ... how is the story best served by a character death?" said DeKnight, the creator and executive producer of Spartacus. "I don't ever want somebody to just die. It needs to have ramifications, either emotionally or towards the plot. So that's always the number-one driving force on who do I kill. ... We will kill beloved characters if emotionally it feels right. Yes, there will be new characters introduced this season. And true to fashion in Spartacus, some will live and some will die horribly."

After season one, Spartacus: Blood and Sand, and a prequel, Spartacus: Gods of the Arena, the latest season features a new Spartacus. Liam McIntyre took over the role after Andy Whitfield left the series and eventually lost a battle with cancer.

According to DeKnight, what drew them to "Liam is that we didn't want to try to duplicate Andy. I mean, that will never happen. He was such a singular, amazing talent. But we wanted to find somebody that had the same base qualities of compassion. And I told all the actors when they auditioned that even though Spartacus may fly into a rage now and then, he never comes from a place of anger. It's always from a place of a wounded heart. And we really felt like Liam captured that essence."

[Beware! There are spoilers ahead!]

With a new Spartacus at the helm, Vengeance has the same level of violence, sex and nudity that you've come to expect, said DeKnight. This season the series picks up the action as the gladiator rebellion takes on the Roman Republic. Returning cast members include Lucy Lawless as Lucretia, Peter Mensah as Oenomaus, Manu Bennett as Crixus, Nick Tarabay as Ashur, Viva Bianca as Ilithyia and Craig Parker as Gaius Claudius Glaber. 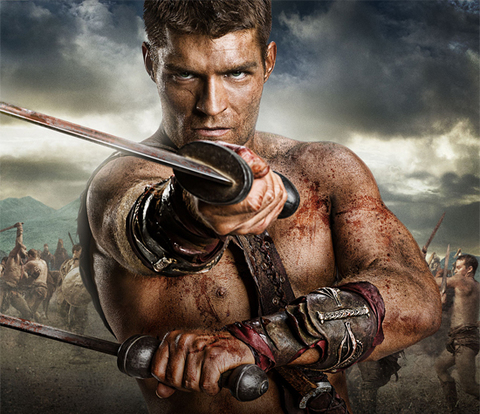 "With Spartacus, this was always planned to be the season where he goes from a man really searching for his personal redemption in the death of his wife and his feelings of responsibility for that—that's why he wants to exact the vengeance—and transitioning him into a true leader. And it's a very, very bumpy ride for him to go from someone that we see in season one, who, he's a good man, but he is much more concerned about himself and his wife. Everybody else is secondary. And this is where he starts to move into caring more about the group and putting their needs above his own, eventually," said DeKnight.

"One of the things I love about the show, and one of the things I wanted to do from the start is that our band of heroes, they're not Robin Hood and the Merry Men. They have a lot of problems internally. It's very historical, since they kept breaking apart and different groups would split away from Spartacus," he said.

As for this season's villains, Spartacus will have some challenges on his hands.

"Ashur is out for vengeance against the rebels because he was being promoted to being in the ludus with Batiatus. Being Batiatus' right-hand man, he had finally been elevated, and then Spartacus literally topples him off his perch and ruins everything for him. So he's got an ax to grind there. And he also tries to ingratiate himself back in with the Romans," said DeKnight.

And Glaber, who we only saw in two episodes back in season one, "he is a major player this season. He's the Big Bad of our season. Historically he's the next guy that was sent after Spartacus, and we follow that history here, so that he's going to be Spartacus' archnemesis, nipping at his heels for the entire season," he said.

When it comes to the ladies, expect more duplicitous action. 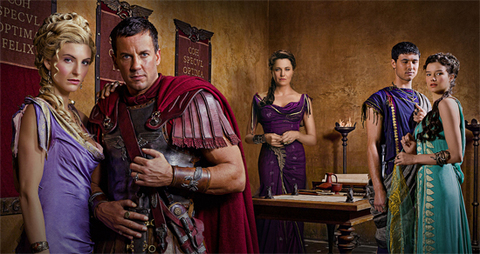 "Ilithyia and Lucretia, which are two of my favorite characters to write, especially when they're with each other, they continue their frenemy dance in a very convoluted, unexpected way. What happens between those two is not what you would think is actually going to happen, especially based on where we left them at the end of season one. They are in fine form, totally. They really continue that storyline in an amazing kind of way," he said.

Lucretia is a shattered woman, said DeKnight. "This season is about her putting the pieces of her life back together and trying to move forward. And along with moving forward, much like everyone else this season, she does have some scores to settle. But for her, she's going to have to be incredibly crafty and smart about her maneuvering, because now she has absolutely no position whatsoever. She's basically living off the kindness of strangers at this point."

Last season, Mira "really responded to Spartacus and was falling in love with Spartacus, and Spartacus had compassion towards her, but I wouldn't call it love. Where we move with them, they have moved into a quasi-relationship, but it's a relationship that's very bumpy and rocky and may or may not work out in the end," he said.

Fans can expect Spartacus: Vengeance to continue to be true to its premium cable origins. "The biggest difference with this show for me is that all my other work was on broadcast network, and this is premium cable. So Al Gough, my old boss from Smallville, who watches this show, I bumped into him, and he chuckled and he said when he watched Spartacus he calls it DeKnight Unleashed," he said.

DeKnight admits he loves not having to deal with the censors or to water things down. He can "go to places, not just sexually, not just with the violence, but good characters could do bad things, which is often very difficult to get the network to sign off on. And bad characters could do good things. I get to work in a very gray world, which I think is where the most interesting drama is," he said. "And it's also been the hardest thing I've ever done."

Here's a look at the new season: