Misha Collins, who plays the angel Castiel on The CW's Supernatural, told SCI FI Wire that he will return as a series regular now that the show's been picked up for a fifth season and promised that his winged character will kick some ass in the near future. Collins also offers us a few spoilers for the rest of this season.

Following is an edited version of our exclusive interview with Collins. Supernatural airs Thursdays at 9 p.m. ET/PT.

Well, the show has been picked up for a fifth season, and you are now going to be a series regular. How does that feel?

Collins: Good, good. It feels great to be a series regular. I mean, you get more money, for starters [laughs]. Which never hurts. And I'm excited to have a job lined up for next year and not have to wonder where my next meal is coming from.

You're moving to Vancouver, Canada, where the show shoots?

Collins: Yeah. I'm actually looking forward to moving to Vancouver. I've lived in Los Angeles for 10 years, and it feels like a good time to spend a little time out of the city. I love Los Angeles, and I'm sure I'll miss it, but I'm also kind of hankering for a change. It feels like everything is moving according to plan.

Your character, Castiel, is accused by Anna [Julie McNiven] of not being able to feel real emotion, but he seems to have a real affection for Dean [Jensen Ackles]. How do you work with that sort of dichotomy?

Collins: Yes, how do you explain the homoerotic tension [laughs]? ... I think that it's sort of, by the transitive property, he's beginning to feel emotion ever so slightly. That's my answer to the question. By his proximity to Dean, some of Dean's human properties are beginning to rub off on Castiel. And he's starting to feel, and I think that he doesn't really know how to interpret the feelings.

I wondered if something like what happened to the character Anna will happen to Castiel. Do you think it's possible that this could result in a situation where he would decide not to be an angel anymore (like Anna did) if he gets too close to Dean and his human emotion?

Collins: I have no idea what they're going to do next year, but since they've established that angels can fall and feel emotion and have real human experiences, it stands to reason that they're at minimum going to flirt with that possibility with Castiel. It seems like it would heighten the dramatic tension nicely. And it would be really fun to play that as an actor, experiencing that for the first time. Feeling emotion.

There's this great Wim Wenders movie, Wings of Desire, ... the Nicolas Cage movie City of Angels was sort of a remake of that German movie. In Wings of Desire, Bruno Ganz, who is the actor in that film, he's an angel who falls and then begins to feel human emotion and goes through a transformation. And watching him go through that transformation is so cool, and playing that myself is an exciting prospect, so I hope they go in that direction. That would be really fun. 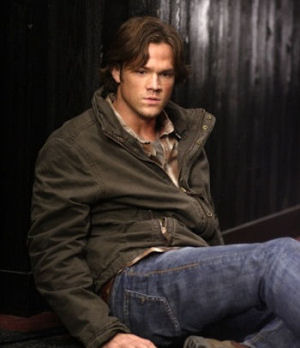 So are we going to get to see your wings? Not just the shadow of them?

Collins: I have a suspicion that the wings, ... there is no way that they would fail to disappoint. And, you know, since we've just seen them as shadows, no one knows what they really look like. Maybe they're actually only 3 inches tall [laughs].

Now, you don't want people to think you have small wings ...

That would be embarrassing.

Collins: I would be trying to find wing enlargement.

I'm sure someone has that on the Internet.

So, unlike the vampires in Twilight, who seem to have no enemies, there are creatures that can beat you. So will we see any new powers from Castiel? Will there be more ass-kicking this season?

Collins: Yeah, you know, it's funny. For all of Castiel's near-omnipotence, in the fights that he's had so far, he's gotten his ass kicked. There's going to be a couple much more brutal fight scenes this season, where Castiel, if not wins the fights, at least holds his ground a little better than he has in the past. So, yeah, maybe he's getting his sea legs.

Are we going to see any more angels? I know we've got Castiel, Uriel [Robert Wisdom] and Anna ...

Collins: You know, I don't know if I'm supposed to talk about it, but I'm going to just say yes. I think you're going to meet my angel boss.

Collins: I actually haven't seen what my angel boss is wearing, but we all seem to be fairly well dressed [laughs]. ...

So are we going to find out more about the body Castiel took over?

Collins: We're going to meet the guy who Castiel possesses, and he's a devout man, which was stated earlier. And we've already shot that, and it was a lot of fun to shoot a whole different character from Castiel.