Supernatural producer lets us know whether [REDACTED] is really dead

If you saw Supernatural's latest incredible episode Friday, then you know the shocking fate of a certain someone that left us questioning whether it was really true. Well, executive producer Sera Gamble has the answer. [SPOILERS AHEAD]

In Friday's episode of Supernatural, ''Hello Cruel World,'' everyone's favorite Angel-short-lived-God Castiel (Mischa Collins) disappeared into a water reservoir amidst a whirlpool/hellhole of a thingy that released this season's big bads called the Leviathans.

Tour The Magicians' laboratory classroom and Physical Kids Cottage in new set shots
The cast and creators of The Magicians on spellcasting, honoring the books and turning into geese

Those pesky things had stayed inside Castiel after this one was ''relieved'' of the millions of souls he had absorbed—leaving only behind his soggy, trade-mark trenchcoat.

All of those Leviathans inside of Cas were too much for the vessel, so they stewed him into the water. These are things we have to be somewhat cagey about, but it was too much certainly and it disintegrated under all of these monsters, if you will.

So, is Castiel truly dead or did they leave his departure purposefully ambiguous? This is what Gamble revealed:

Both things are true, actually. We purposely left it ambiguous. In the life of the show, they just suffered the death of one of their best friends, something that they are dealing with in a serious and substantial way.

Death is a funny thing on Supernatural because we're a show about life beyond the grave, but this is one of most serious losses that Sam and Dean have had to face in the life of the series.

But fear not, Mischa Collins fans: It seems we haven't seen the last of the actor. The powers-that-be on Supernatural have plans for him, and whether that means Misha will come back in a whole new incarnation (*cough* the main Big Bag *cough*) remains to be seen:

It has always been our intention to bring back Mischa in some form. When we called Mischa to let him know that we had this plan for the character, we talked about this on a longer schedule than in these first two episodes. We certainly can't say too much about where the story is going to go, but we love Mischa and want to continue to work with him.

This is all part of the story that launches the season. So, we didn't think of [his death] as having more or less impact; we think of all of this as the big kickoff.

Do you believe it's truly the end for our beloved Cas? Would you rather have the angel back or do you want to see Mischa Collins play a whole new character? 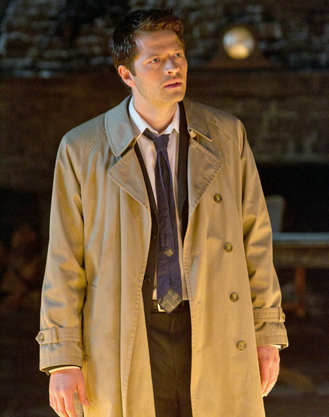