In last night's episode of The CW's Supernatural, "Dark Side of the Moon," Sam and Dean died yet again, this time after being taken out by hunters annoyed that Sam had started the apocalypse and all. Regular viewers of the show won't be too surprised that the brothers Winchester were killed, only perhaps that they went to heaven. And perhaps that the episode didn't end with Sam and Dean in a happy place. (Spoilers ahead!)

"As it turns out, we've decided that Sam and Dean are going to die many times," said executive producer Ben Edlund. "And this is a terrible plight, when you think about it. It's a terrible thing when nobody lets you die. They might imprison you forever or take over your body or they might torture you, but you can't get out of the game. That's Sam and Dean's problem."

Griffin Newman rallies fans to fight for The Tick after cancellation news
Ben Edlund on his plan for the new Tick series, how it differs from Fox's 2001 effort

"It's a very honest appraisal of what it's like to be trapped on a TV show, I think," Edlund added with a laugh. "You can't get out, and that's good for us. And we've also sort of spoken about this. ... I don't know how many other shows have done this, which is, like, we have completely embraced the notion that these main characters, Sam and Dean, are the most important people on the planet, which is rare. I mean, most shows function that way. If you look at Smallville, or if you look at Jack Bauer's show, 24, ... all these shows have, obviously, the most important person is whoever the show is centered on. Of all the people in the world, that's where the cameras are. But we admit it. We have people routinely telling Sam and Dean, 'Oh, you're the most important people in the universe' [laughs]. We're the only show that admits it!"

Edlund (Angel, The Tick, Firefly) believes Supernatural is making some of the most interesting genre-based stuff going. "I've worked a long time in this area, and we're like marching full bore into territories that have, I think, in my experience, generally been off limits. And I would say that [creator Eric] Kripke, he's dedicated to a kind of courageous TV making," he said. 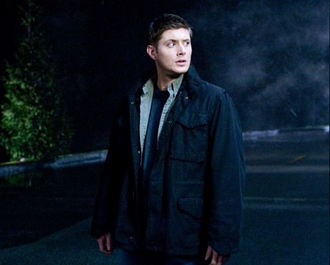 "This thing is like a volcano," Edlund said. "It's trying to keep our heads straight as we march further into ... We're trying to keep it dramatic, accessible and emotionally connected while walking further and further into the mechanics of a universe. I mean, we have angels and demons, and we're talking about that. We have characters looking for God, literally looking for God! So the challenge is to somehow navigate all of this stuff with the same kind of semi-naive popcorn-movie [style] to keep it from being pretentious. How can you do a portrait of the entire cosmological workings of the universe AND keep it at a Saturday matinee level of enjoyment? That is a challenge."

Of course, the bigger problem is going to be what to do after the apocalypse ends (most likely this season), now that Supernatural has gotten picked up by The CW for a sixth season.

"What a challenge! I think it's very exciting to maintain something after you've really ... We think we got to go fight Ganesh. We got to get out of the Judeo-Christian matrix, and it's Ragnarök," said Edlund. "We got to go the Norse End of Days after this. We'll cycle through. And then everyone finds they're living on top of a turtle, which is the Japanese world myth."