Wow, Cloudy With a Chance of Meatballs sounds pretty good

Tag: Cloudy With a Chance of Meatballs

Except for Pixar's impressive filmography, most computer-animated movies are all sort of the same. On a technical level, they all purport to advance some fledgling, miniscule program that allows shadows to bounce or reflect slightly better than in the last movie you watched. Meanwhile, their stories only differ by a matter of degrees, and are ultimately eclipsed by the spectacle of an action scene or comedy sequence.

But Cloudy With a Chance of Meatballs, as much to our surprise as anyone's, is different from what typically constitutes computer-animated storytelling. The film follows the adventures of a failed inventor named Flint Lockwood (Bill Hader) who accidentally unleashes a torrential downpour of food upon his hometown when one of his inventions launches itself into the clouds and starts manufacturing burgers, spaghetti and ice cream by the ton.

SCI FI Wire recently spoke to director Phil Lord and Chris Miller and stars Anna Faris and Bill Hader in Los Angeles about what it is that truly transcends the boundaries of more conventional animated movies.

Cloudy With a Chance of Meatballs, based on the children's book by Ron and Judi Barrett, opens Friday in conventional theaters, and it's three times as delicious in IMAX 3-D.

While the filmmakers were committed to remaining faithful to the source material, they saw a movie version as more of a classic blockbuster than just a visual buffet. "We both had grown up on it, and it was a big influence on our comedy sensibilities, and we looked at it and saw pickles smashing into buildings and pancakes on the school," Miller said. "We were like, 'This is a Jerry Bruckheimer movie, but silly on purpose.'"

Lord added: "So we rented Armageddon and Earthquake—We watched every Irwin Allen movie that's ever been made. Fantastic Voyage. Like, some movies that hold up great, some that hold up less great, and used that as an inspiration."

Although the film's main character is male, he's got an atypically strong and substantive female companion. Anna Faris plays Sam Sparks, a spunky weather girl who becomes more beautiful when she puts on glasses and pulls up her hair in a ponytail. Faris acknowledged it was fun to play a role where her character was smarter than she let on for a change. "It was really fun to have that reversal," Faris said. "Normally, you have the nerdy girl become hot and cool, and it was fun to flip that on its head a little bit. Thematically, I guess it's a little sad that she feels the need to suppress that. But I had a blast doing it. I thought it was just going to be a total cakewalk. I was like, 'It's an animated movie. It will be easy, easy, easy.' But, no. It was so hard.

For Lord and Miller, the photorealism of current CGI didn't do their story justice. Describing the more cartoonish aspect of the film's imagery, Lord said, "The great thing about animation is it gives you a lot of freedom and the thing about the Warner Brothers cartoons that we grew up on and loved is that there's a level of abstraction and absurdity to it. That's the joy of it, that any crazy thing can happen. So the animators, many of whom do highly-intensive special-effects work for live-action movies like Spider-Man, were overjoyed to work on something where it was like, the sky is the limit! If you can think of it, you can try it. The weirder the performance, the better, the stranger the choice, the better. We really encouraged them to embrace unusual or unique or strange choices, and we also did a lot of work up front to make sure that the rigs for the characters allowed for really broad ranges of emotion." 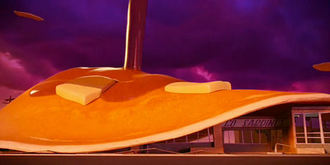 Despite its more classically animated look, the actors couldn't give equally cartoonish performances. Talking about playing Flint, Hader said, "I had done some animated stuff before, but I'd always done different voices. This was the first thing I had done, where they were like, 'No, we want your normal voice,' and I was like, 'Uhh, how do I do that?' There is an emotional thing to it. There were scenes in it where I would approach it like an actor. It's not all just going in and yelling and screaming. With other animated movies I've done, it was like, 'You're a British guy' or whatever, and you just do that, and it's a little character. But, with this, I remember doing the scene when Flint's in the trash can, and they were really talking me through it. They were like, 'You're really sad.' And then, I saw that scene in the movie, and my wife got really sad during it. She was like, 'Aw, you're in a trash can.' And, the end of the movie really gets people, and the relationship with the dad. You don't just walk in. You really do have to think about it."

Miller and Lord's approach to comedy ensured that Cloudy's punch lines and plot developments were thoroughly explored. As former writers for How I Met Your Mother, Lord and Miller know a thing or two about contemporary comedy and made sure every scenario was sufficiently original. "People are really savvy, and they can see jokes coming, so you have to put a twist on those jokes," Miller said. "That has always been our policy: It has to be unique no matter what it is. You have to do something that no one has seen before, so that was true from the story, and the experience of going to a movie and seeing what it's like inside a spaghetti tornado. No one that I know in cinema has done that. The way that we try to craft a joke is sort of people know to expect 'that' joke, so you have to do a twist on the joke of the joke."

Tag: Cloudy With a Chance of Meatballs
Close Search Return to SYFY homepage.