Syfy announced its summer schedule today, including a bunch of new series and the return of some fan favorites, as well as a slate of awesome Saturday night movies. Read the full details below.

Following are highlights of the Syfy 2010 Summer Programming Schedule (June-August):

♦The traditional holiday movie marathon runs from Friday, May 28, through Monday, May 31, including "cold as ice" films (Yeti), horror flicks (premiere of Wrong Turn on Saturday, May 29 at 9PM), "creatures in the water" films (Lake Placid 2) and a festival of Stephen King adaptations (The Stand) on Memorial Day, May 31.

♦Mary Knows Best (working title)—Premieres Thursday, July 15, at 9PM (ET/PT)—Mary Knows Best is a docu-soap reality series following Mary Occhino, a successful radio host, psychic intuitive and mother of three, who gives a whole new meaning to the term "mother is always right". Her children, Jackie, Chris and Carl are a mismatched group of siblings consisting of a skeptic, a paranormal investigator and a reluctant psychic. In each episode viewers will meet a humorous and unforgettable cast of family characters including Mary's outspoken older brother Charles and two adorable grandchildren. The series is produced by Atlas Media Corp.

♦Paranormal Investigators (working title)—Premieres Thursday, July 15, at 10PM (ET/PT)—Debunks fact from fiction by uncovering the truth behind supernatural and unexplained occurrences which have been caught on tape. In each episode, the six-person team, led by former FBI special agent Ben Hansen, searches for the most intriguing and unusual images, videos and unnatural phenomenon found online and around the world. Selecting the most intriguing images, the team heads into the field attempting to recreate the video, carrying out key experiments and searching for clues and evidence. The team uses all the latest tools, CGI and investigative techniques at its disposal to try and answer the question, "Is it real?" Produced by Base Productions.

♦Haven—Premieres Friday, July 9, at 10PM (ET/PT)—New drama series Haven, based on the novella The Colorado Kid from renowned author Stephen King, follows FBI agent Audrey Parker (Emily Rose), who arrives in the small town of Haven, Maine to solve the murder of a local ex-con. Before long, her natural curiosity lands her in the epicenter of activity in this curious enclave, which turns out to be a longtime refuge for people with a remarkable range of supernatural abilities. Among the townspeople are local cop Nathan Wuornos (Lucas Bryant), who eventually becomes Audrey's partner, and the mysterious and charming Duke Crocker (Eric Balfour).

The impressive creative team behind Haven includes showrunner Scott Shepherd (Tru Calling, The Dead Zone) who is joined by his partners, Executive Producers Lloyd Segan and Shawn Piller (The Dead Zone, Wildfire, Greek), and E1 Entertainment's John Morayniss (Hung, Copper) Noreen Halpern (Hung, Copper), Laszlo Barna (The Bridge) and Michael Rosenberg (Hung, The Riches). The pilot is written by Sam Ernst (Shrek the Third, The Dead Zone) and Jim Dunn (Shrek the Third, The Dead Zone) who will also serve as executive producers on the series. Haven, from E1 Entertainment in association with Pillar, Segan and Shepherd, will be the first property to be produced for Syfy in the US and NBCU Pay channels around the globe (excluding Canada and Scandinavia). The series has been co-commissioned by Syfy with Canwest Broadcasting (Canada). International distribution is handled by E1.

♦Ghost Hunters Academy—New episodes premiere Wednesday, June 2, at 9PM (ET/PT)—Cable's top paranormal franchise returns with the definitive search for the next great ghost hunter! On all-new episodes of Ghost Hunters Academy, expert instructors Steve Gonsalves and Dave Tango will once again train a group of recruits to become the newest team member, but this time, one hopeful will be voted off each week by one of the ultimate judges of paranormal investigating: Ghost Hunters' Jason Hawes! 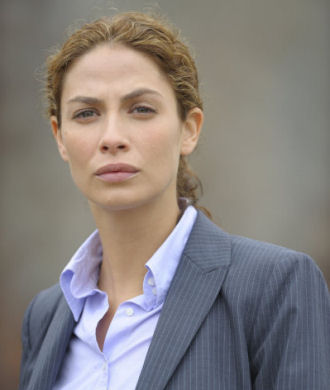 ♦Warehouse 13—Second season debuts Tuesday, July 6, at 9PM (ET/PT)—Warehouse 13 follows two Secret Service agents who find themselves abruptly transferred to a massive, top-secret storage facility in windswept South Dakota which houses every strange artifact, mysterious relic, fantastical object and supernatural souvenir ever collected by the U.S. government. The Warehouse's caretaker Artie (Saul Rubinek) charges Pete (Eddie McClintock) and Myka (Joanne Kelly) with chasing down reports of supernatural and paranormal activity in search of new objects to cache at the Warehouse, as well as helping him to control the Warehouse itself. Warehouse 13 also features Allison Scagliotti, along with series guest star, CCH Pounder.

During its freshman season, Warehouse 13 became the all-time Syfy leader in total viewers (4.1 million), Adults 25-54 (2.1 million) and Household ratings (2.9), as measured by 7-Day DVR data, making it the most successful series in Syfy's 17-year history. The series is produced for Syfy by Universal Cable Productions. It is executive produced by Jack Kenny (The Book of Daniel), who also serves as showrunner.

♦Ghost Hunters International—New episodes premiere Wednesday, July 14, at 9PM (ET/PT) —Like their U.S. counterpart, TAPS (The Atlantic Paranormal Society), GHI is a squad made up of everyday ordinary citizens who investigate and attempt to debunk claims of other worldly activity. In the premiere episode, the team travel to the famous town of Nottingham, England and search for the Sherrif of Nottingham's Ghost at the Galleries of Justice. Other countries on their global adventures will include, Wales, Norway, Poland, Ukraine, Estonia and many more.

♦Lake Placid 3—Premieres in June—In this sequel to Lake Placid 2 (most watched Syfy Saturday Original Movie ever), a game warden, his wife and their young son move into their aunt's cabin on Lake Placid, where the lonely boy starts feeding baby crocodiles he views as pets. Three years later, the crocs start looking at him and his family as their food. Stars Colin Ferguson (Eureka).

♦Stonehenge Apocalypse—Premieres in June—When the giant stones of Stonehenge begin to move and cataclysms occur all over the earth, only a fringe radio talk show host who's an expert in UFOlogy figures out that the ancient monument is really alien technology. Stars Hill Harper (CSI NY).

♦Jack Hunter and the Lost Treasure of Ugarit—Premieres in July—Jack Hunter, an adventurous fortune hunter, goes to Syria to find an ancient treasure buried thousands of years ago - which might be cursed. Stars Joanne Kelly (Warehouse 13).

♦Goblin—Premieres in July—A family vacations in mountain town haunted by a goblin that steals babies. When their newborn disappears, it's up to his older half-sister to rescue him.

♦Mandrake—Premieres in August—A group of adventurers searching for a Spanish conquistador artifact find that the jungle around them is a single living being - and it's not happy they're there.

Syfy is a media destination for imagination-based entertainment. With year round acclaimed original series, events, blockbuster movies, classic science fiction and fantasy programming, a dynamic Web site (www.Syfy.com), and a portfolio of adjacent business (Syfy Ventures), Syfy is a passport to limitless possibilities. Originally launched in 1992 as SCI FI Channel, and currently in more than 96 million homes, Syfy is a network of NBC Universal, one of the world's leading media and entertainment companies. (Syfy. Imagine greater.)