Ghost Hunters is back to resolve last season's shocking cliffhanger

We hadn't seen anything like it before on Syfy's Ghost Hunters. In the middle of investigating "Pearl Harbor Phantoms" at the Pacific Aviation Museum at Pearl Harbor last June, lead investigators Jason Hawes and Grant Wilson got called away by an urgent request to help a desperate family.

Tonight, when Ghost Hunters returns in "Urgent," we find out the dramatic results of the Pearl Harbor investigation and join Jason and Grant as they try to help a Rhode Island family with an emergency investigation involving a young child who's being tormented by the spirits of an old man in the family's kitchen and a black cat in their living room.

"When there is a family or a child involved, it is a priority. So they had to go, and we were okay to tie up the loose ends in Hawaii," said TAPS investigator Adam Berry.

"It was just definitely an experience we had never had before," said TAPS investigator Amy Bruni. "Suddenly, by the end of the case, we were by ourselves."

It's the start of the exciting midseason return of Ghost Hunters, which Bruni promises will offer up "some crazy evidence this season. And I know that even Steve [Gonsalves] has said that this: as far as evidence goes, is the best evidence he's seen since he started with TAPS." She credits the full-spectrum cameras partially for the results they are getting.

"As the equipment progresses, our ability to collect evidence progresses, and it has been pretty crazy. And also, as we go further, people start bringing more locations to us that have consistent and constant paranormal activity. So we're basically really lucky in that way, that we get to go to these amazing locations. And I just feel like the activity is really perking up this season," said Bruni.

Next week, in "Hill View Manor," the team heads to a former poorhouse and retirement home with its own ghostly issues.

"It is creepy. I mean, it really is, and the history there is kind of crazy, and [the building] was surprisingly complete. Many times when we go into a location like that there is no power, there are walls gone and leaks," said Bruni. "But it was pretty put together still, and so we were able to get all our equipment up with no problems. ... But just the stories there were so awful. Sometimes you go into these places, and you know what has happened there already, and it's hard not to be sad, because you know this is how many people have died there and what they went through."

Bruni confirmed that Hill View Manor was "one of the first investigations where I went off by myself. I went down to the boiler room for like an hour and just sat there by myself and talked to whatever was there. And it was pretty scary."

"It definitely was cold, dark, and I think it was the first investigation in a long time that Amy and I put on masks because some hallways were so damp, there was mold and crazy things ... but this was heightened a little bit just because of our surroundings," said Berry. 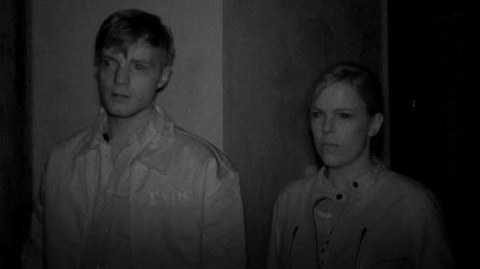 Another spooky investigation takes the TAPS crew to Seaview Terrace, the setting for the gothic soap opera Dark Shadows, which has reports of a door handle that turns on its own, along with unexplained footsteps and banging.

"It's massive," said Berry. "The scale of it, you can get lost in it if you didn't know which way you were going. And the history behind it was all very exciting."

"There was some really crazy sound we captured there. And I don't think anybody heard it. And so we don't know what it was or where it came from," said Bruni. "You'll have to hear it to believe it. It sounded like a dump truck or something. But yes, that location was just really cool, just because it was the Dark Shadows house. I would like to live there."

Their work with TAPS (The Atlantic Paranormal Society) and the creepy situations they end up in haven't dampened their desire to explore the paranormal. Bruni considers herself a "ghost therapist" who grew up in a haunted house, and Berry won the Ghost Hunters Academy competition, which earned him a spot on TAPS.

"There is always an uncertainty about the life hereafter, and people always want to know what's happening to their loved ones, what they are going to go through when they pass away," said Berry. "And people are always looking for hope that there is something beyond what this is. So I think people will always look for answers and solutions."

"Regardless of all of the scientific advances we've made, people are still seeing full-bodied apparitions walk by them. People are still having things strangely thrown across the room for no reason," added Bruni. "This stuff is still happening, and the amount of reports of this, there is no way that it's not happening. Just because science can't explain it doesn't mean it doesn't exist. And people, once they have these experiences, they want to know what the heck is going on. Science isn't answering it for them in all cases. I think it will eventually. I think we're not there yet."

While science may not be coming up with all the answers, Bruni and Berry promise TAPS will continue the hunt. Beyond this fall's investigations, TAPS will host its annual Ghost Hunters Halloween Live six-hour investigation, which ends Syfy's 31 Days of Halloween spook-a-thon.

"We're very into the month of October. That's kind of like for us the Christmas season for a retailer. We are so busy. Every weekend we have something to do, and then we have to prepare for the live show," said Bruni. "And it gets so exciting. There is always this buzz about that month for us. And every Halloween we are ghost-hunting. So it's like we are doing what we love on Halloween night, which is great. So that's how we celebrate."