When actress Anna Silk first heard about a new Canadian series called Lost Girl, there was only one thing she could think. Her initial reaction was "This is totally written by a guy. Bisexual succubus who has to have sex to heal? Oh, my God. I just thought, 'What is this?'"

"And then I read the script, and it was written by a woman named Michelle Lovretta, who's a fantastic writer and creator of our show," said Silk in an exclusive interview with Blastr. "And she wrote Bo with so much heart. And the sexual content of the show is ... it's who and what she is. It's not gratuitous. It's really character-based. And I think that's a cool power to have. It's such a sexy power, yeah. But it's also something she's had to really grapple with ... The vulnerability and sensitivity of Bo is what really drew me. I don't think I would have been cast if it was a different kind of leading female. I just don't think it would have been me," said Silk.

The series follows the story of Bo, who learns that she's a member of a magical race of beings called the Fae. Beyond that she's a succubus who can drain a human's life energy with a kiss, which presents problems for her character, considering she was raised by humans not knowing who or what she was.

However, things don't get any less complicated once she discovers she's a Fae succubus. The Fae are split into two groups, Light and Dark, and they want Bo to choose a side. When she refuses, it complicates everything for everyone. Joining her in her journey are her human roomate, Kenzi (Ksenia Solo), a human doctor named Lauren (Zoie Palmer) who studies the Light Fae, and a Light Fae cop named Dyson (Kris Holden-Ried).

Lauren and Dyson present another issue for the bisexual Bo. "She's involved in a love triangle in the first season with a man and a woman. One is Fae, one is human. It's very complicated," she said. 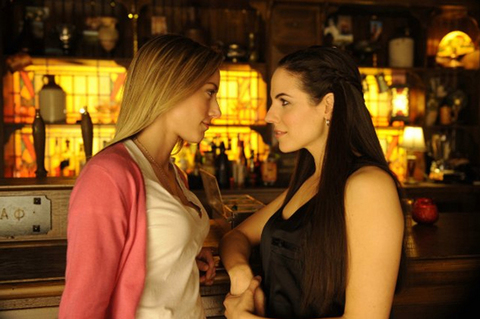 The love triangle has created "this whole Team Lauren/Team Dyson divide" thanks to the show's popularity in Canada. "Which is great. It's nice that people are sort of rooting for one relationship or the other. I think it shows how passionate people are about it. And I'm really proud to play a character who has all those sides to herself. It's just who she is," said Silk.

"She's just attracted to those two people, Dyson and Lauren. There's just an attraction that just exists right from the get-go. And as actors we have that natural chemistry. I mean, Kris and Zoie are both amazing to work with and really attractive people. They're charismatic and attractive. They don't really have to do much to be like, 'Hey, I like you,'" she said.

"I think it's really about the relationship that you develop off-camera that makes that kind of stuff work. And we want these relationships to be real and honest. Real in this fake world, which is kind of fun, said Silk with laugh. "But they're real honest relationships and it's not hard to do that when you have a natural chemistry with people. It's a little harder when that doesn't exist."

As for all those sexy scenes, "when you sign up to play a succubus, you kind of expect a certain amount of smooching, at the very least," she said.

However, that's not the most difficult thing about being Bo for Silk. "The biggest challenge in playing her for me is to make sure that the stronger moments come out of [her] vulnerability, because I think that's where they come from with Bo. I think that she's had to learn to be really strong. Her past is rather shameful to her," she said. "But her greatest source of shame became her power. And that's been the growth for Bo, and that's what's been challenging to play, certainly, but also the most rewarding thing to play, is to grow with her. And I got to do that as an actor. I got to be really scared and unsure and then grow into somebody more confident at the same time. So the show gave me that luxury of being able to learn and grow along with her." 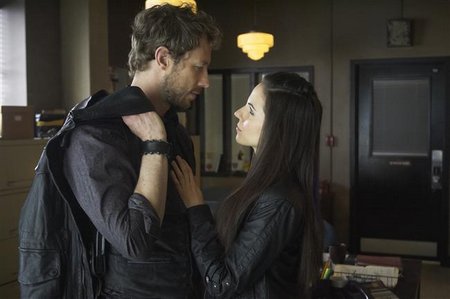 Silk feels Bo has such depth that "I don't know if I'll ever have a role like this again." As for the Lost Girl universe, she's thrilled at the endless story possibilities a world with Light and Dark Fae presents.

"I love that the Fae world lives and breathes amongst humans. I love that it's just right there. It's hiding in plain sight, I guess. It really is. And I think that's really cool. So in terms of playing Bo, I get to just kind of experience this world as it comes to me, which is exactly what Bo is doing," said Silk.

"I think the Syfy audience is just going to get an introduction to her and to the show and to all the cast of characters, and they'll be intrigued, I hope, to see the show develop over several seasons. Because it really, really is quite an amazing journey." Syfy has picked up the first two seasons of Lost Girl, including the first 13-episode season and the second 22-episode season. In Canada, the series has been renewed for a third season.

"I can't wait for people to watch [in the United States]. That's really what I'm excited about, is for people to just get to experience Lost Girl for the first time, for a lot of them. Which I think will be really cool. I really can't wait to be on Syfy."

Silk gets her wish next Monday.

Here's a sneak peek of Bo in action:

Which team will you be on? Team Lauren or Team Dyson?