Taboo revealed hidden talents as an assassin in Street Fighter

And you thought Taboo was just a singer-rapper.

Taboo may be best known as a member of the chart-topping music group Black Eyed Peas, but he's also an actor and a Jeet Kune Do enthusiast. And he'll show off those talents this weekend when he co-stars opposite Kristin Kreuk, Neal McDonough, Michael Clarke Duncan, Chris Klein, Robin Shou and Moon Bloodgood in Street Fighter: The Legend of Chun-Li.

The film is based on the popular video game franchise of the same name, and it features Taboo as Vega, a masked baddie with a taloned arm who helps Bison (McDonough) make life hell for the heroine, Chun-Li (Kreuk).

You actually went to acting school, but it just so happened that Black Eyed Peas took off before you could really pursue an acting career, right?

Taboo: Right. I'm going back to my first love, which is performing, being on stage, being in front of a camera. I'm also a martial-arts practitioner, so it was an easy transition to go do Street Fighter, which is action-packed and let me showcase my acting and martial-arts capabilities.

Were you a fan of the old game?

Taboo: Definitely. Just being a part of the martial-arts world, you have to know video games and television shows and movies that have similarities, and Street Fighter was definitely one of those games that you had to know. If I was going to play any video game, it'd be things like Mike Tyson's Punch-Out!!, Street Fighter and Mortal Kombat. 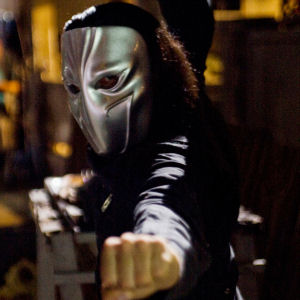 The warrior/assassin Vega (Taboo) dons his signature mask as he goes into attack mode.

How different is this film from the earlier Street Fighter movie?

Taboo: The first Street Fighter was with Jean-Claude Van Damme, and it was to the T exactly like the video game, and that movie crashed and burned because it was so to the T, because Blanka [Robert Mammone] was green and Bison [Raul Julia] was wearing a general outfit. It was just too cliche and too cartoony. So people couldn't take it seriously. But with this film, it's more action-packed. It's directed by Andrzej Bartkowiak, and also the choreography for the fight scenes is done by Dion Lam, who is an extraordinary Hong Kong stunt coordinator, and he brought the martial-arts element to it. And it's more about the martial arts and the action-packed drama behind it. Kristin Kreuk did an amazing job, and Neal McDonough did an amazing job as well.

Taboo: He's the one character that you don't know if he's mortal or immortal. In the movie he wears a mask all the time, and he has a claw, and he's in and out. He does his dirty work, and he's gone before you know it, and you're looking to see more. It's a small part, but it's a huge role because it has a legacy and it has an enormous cult following.

How did you like the look of the character and the claw?

Taboo: I loved it, man. I wasn't wearing a matador outfit, and I wasn't flamboyant and very androgynous. I wanted to give Vega more of an edgy, "Don't f--k with me" vibe, as opposed to, "Hi, I'm a matador. Here, here's my bull. Come and chase my red flag." It was more about the mystique of the character and the darkness. This is a darker movie, which is what I like about it.

If this film is a hit, you just know they're thinking franchise. How into that would you be?

Taboo: Oh, I'm already there. I've already talked to Hyde Park Entertainment and to Fox, and I let them know that, hands-down, I want to be a part of this [franchise]. I loved the cast, the crew, the corporate people, down to the stagehands. I had a great time doing it, and if I come back I'd like to learn about the history of the character. Why is Vega always wearing a mask? Even though I know the concept, I'd like the story to be told a little bit more on why he wants such vengeance against people. His whole thing is that he wants to protect his face because he's very vain. He's trying to keep his face from being cut or scratched. Why is he like that?