Meet Sanctuary's Amanda Tapping and help out her charity!

How much do we love Sanctuary's Amanda Tapping? A lot more since we've heard about her new charitable foundation, "Sanctuary for Kids," designed to support charities that provide aid to children in crisis.

To kick-start the foundation, Tapping will auction off a set visit, props and other items from the Syfy series Sanctuary this month; check out the official site for more information. 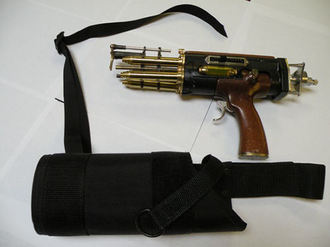 This Sonic Stunner is one of the props being auctioned

Vancouver, BC - Television Actor and Executive Producer Amanda Tapping announced today the launch of a new not-for-profit foundation, Sanctuary for Kids (S4K) that will support local and international charities providing vital aid to children and youth in crisis.

Sanctuary for Kids was inspired by the sci-fi TV series Sanctuary, for which Amanda Tapping is Executive Producer and the series lead actor. The foundation will harness the tremendous and supportive sci-fi community and provide access to rare and experience-based online auction items from Sanctuary to raise funds for children's charities. The first auction will take place November 12 - 22, 2009.

S4K was founded by Tapping, Jill Bodie (B.ED., M.S.W.) and Damian Kindler (Executive Producer and Creator of Sanctuary) through their mutual association with the television series. All three serve as Directors for Sanctuary for Kids. In order to enable 100% of the funds raised to go to the children's charities, Bodie is donating all of her time and resource costs as administrator for the foundation and Tapping and Kindler are personally covering all administrative and start-up costs.

"We all feel very lucky and honoured to be able to do jobs we love with people we love in this industry," explains Amanda Tapping. "Jill, Damian and I all felt a very strong desire and real responsibility to do something with the reach and audience we have through Sanctuary and the sci-fi community. We didn't want to waste the influence that the series has, or the meaningful connections we personally have made with so many people around the world."

"This is an initiative that is based on relationships and working as a community at large," continues Jill Bodie, Director, Sanctuary for Kids. "It's about doing something very real and tangible for children and youth who desperately need protection. Sci-fi fans are so connected and loyal - we will be relying on their connectivity and passion to help spread the word about the work we are doing."

Adds Damian Kindler, Executive Producer/Creator, Sanctuary, "Ultimately, we want to set an example and make charitable giving and outreach a standard practice in the television and entertainment industry. We all feel that it would be irresponsible to ignore that influence."

Sanctuary for Kids will host three auctions throughout the year selling "priceless" items as well as meet and greet opportunities with Sanctuary actors and producers. The first auction will take place November 12 - 22, 2009 with such items as a behind the scenes set tour and lunch with Amanda Tapping, a personal Skype chat with Executive Producers Amanda Tapping, Damian Kindler and Martin Wood, a well known prop used in the series ("Sonic Stunner"), as well as an opportunity to name a new character in the show.

Sanctuary for Kids has chosen the Nepal Orphans Home and Watari's TTIP (Transitioning to Independence Program) and TIPPY (Transitioning to Independence Program for Parenting Youth) Programs to launch the foundation. The Nepal Orphans Home (www.nepalorphanshome.org) attends to the welfare of children in Nepal who are orphaned, abandoned or not supported by their parents. Watari's Programs (www.watari.org) work with the homeless youth population in Vancouver to help stabilize single, pregnant and parenting youth in safe, affordable housing and encourages commitment to their treatment plans.

For more information on Sanctuary for Kids and upcoming auctions, visit www.sanctuaryforkids.org