Terminator's Riley: Is she dead? Is she back?

In Fox's Terminator: The Sarah Connor Chronicles, we last saw Riley (Leven Rambin)—the supposed ordinary girl who befriends John Connor (Thomas Dekker)—lying unconscious on a bathroom floor, having apparently slit her own wrists. This after it was revealed that Riley was really—gasp!—a girl from the future, sent by Jesse (Stephanie Jacobsen) to spy on John.

So is she dead? Does she come back? (Spoilers ahead!)

Rambin told SCI FI Wire that she's not as dead as she appeared and added that upcoming episodes will reveal her secret to John. Rambin knows how John will react when he finds out.

But she won't tell us.

"You can speculate all you want," Rambin said in an interview earlier this month in Hollywood. "I know. Everybody's playing everybody, so that's all I can say, really."

The remaining nine episodes of season two also feature Riley's first big action scene. "I have a big action scene that's my big spotlight, my own action scene," she said. "It was like, 'When am I going to get my own fight?' And I got it in a big way, big way."

As for Riley's actual mission, Rambin said viewers already have as much information as they're planning to reveal this season. She reports back to Jesse, but Jesse just gives her vague orders that only Riley would understand. 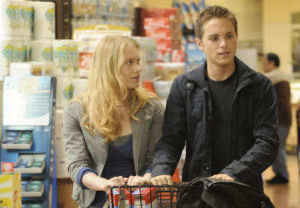 "It's about as clear as it gets. That's about as much as they're going to lay it out for everybody, that she's just there to drive a wedge between Cameron [Summer Glau] and John, because they believe that if he gets too close to the robot that in the future he will befriend robots or not want to fight them or whatever. Some of her interaction with John is her doing what she thinks Jesse wants, and some of them are her actually falling in love with John. So it's just always a struggle for her to kind of do it, but sometimes she cracks and just can't do it."

When Rambin first joined the series, she told the press that Riley was just a normal girl entering John Connor's world. It turns out that Rambin knew all along.

"Yeah, that was a lie," Rambin admits now. "That's what I was told to say, and that's what it seemed like at first."

Who would have wanted to play a normal girl on Terminator anyway? "I knew that that would never happen anyway, so that's not what I was ever expecting. But I have to admit that I was not prepared for all the things that they had in store for me, even some of the stuff that I've done recently. I can't believe I have this role right now. It's a lot more fun than just being some bimbo on some high school 90210 [type show] or something. No offense to them, but I'm just saying. Do they get to kick butt every day? No." Terminator: The Sarah Connor Chronicles returns Feb. 13 and will air in a new timeslot, Fridays at 8 p.m. ET/PT.