The greatest fan-made Star Wars project EVER is finished

The announcement of those Star Wars Blu-rays was awesome, but here's something even MORE awesome. That crowd-sourced project we told you about last year in which fans were asked to re-create the complete Star Wars story in 15-second bits—is DONE! (And believe us, you'll want to go watch it NOW!)

Casey Pugh had a killer idea. Have fans claim 15-second sections of Episode IV—A New Hope which they'd reshoot in any way they wanted—live action, animated, LEGO, ASCII art ... anything! Then cut them together into a complete retelling of the original Star Wars.

Howzer takes a stand and Hera takes flight on Star Wars: The Bad Batch
Creepy, crawly bug horror returns to Star Wars in the latest episode of The Bad Batch 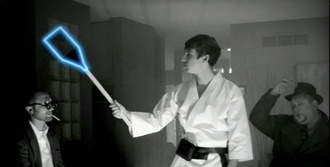 The result may be the greatest project Star Wars fans—or any fans—have ever pulled off.

We wish we could embed the whole thing here for you to watch, but the rights still need to be sorted out. As the site reports, "we are working through the legal issues in order to bring that to everyone as soon as possible."

But here's one scene to stand in for the rest:

Now head over to Star Wars Uncut to watch the complete film. And then come back here and let us know what you thought of it!