A true Indiana Jones-esque mystery hit the Internet last week, when word broke that the real University of Chicago received a meticulously vintage package for the fictional treasure hunter. Now the mystery has apparently been solved. So why did a package for Indy show up a few decades late?

Apparently the package, which included Indy-era documents and a re-creation of the character Abner Ravenwood's journal (Ravenwood taught at the University of Chicago), is the work of amateur prop maker "Ravenbar," aka Paul. It was sold on eBay a while back and headed to its purchaser—at least until the fake package fell out of the real envelope.

The mail service didn't realize it was a fake, so the package was eventually delivered to the university (despite the fact that it was sporting vintage, photocopied stamps). In a nice turn of events, Paul has said the school can keep the package, as he is already hard at work on a replacement for the actual buyer. So now the college plans to hold onto the set and actually display it at the Oriental Institute. 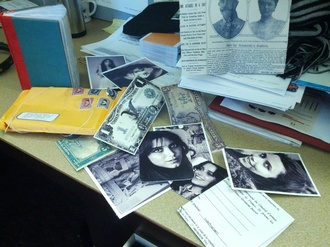 Here's the update from the college, which recaps the wild journey:

"According to Paul, this package was en route from him in Guam to his intended recipient IN ITALY (registered mail confirmation attached) when it must have fallen out of the package in Hawaii. Our address had originally been put on the manila wrapping of the journal just for cosmetic effect. We believe that the post office wrote on our Zip code on the outside of the package and, believing the Egyptian postage was real, sent it our way. From Guam to Hawaii en route to Italy with a stopover in Chicago: truly an adventure befitting Indiana Jones."

Do you buy this cover story, or think a real-life (albeit very old) Indy is still out there hunting for treasure?