That Cybermen Doctor Who episode? Here's what they'll look like

While we were pretty darn excited about learning that Neil Gaiman's upcoming Doctor Who episode was going to be about the return of the Cybermen (yes, again), we were still left to wonder which version they were going to use—until now.

Filming for Gaiman's episode, "The Last Cyberman," has begun, and Doctor Who TV set reporter Ryan/Timeboy has seen the new Cybermen design. Here's what he's saying about it:

Very similar to the Cybus ones, but they have tighter armour and Tomb of the Cybermen-like faces!!! Really shiny. The armour is like slim-fitted rubber, similar to the new Sontarans, but silver. Guns fixed on arms, and the leader has an extra gun.

They're walking softly, slowly, and quietly, like the Hartnell/Troughton era Cybermen

The Cybermen have a cool chest plate, with a camera iris thing in the middle, like this, but closed... Cool slot-like mouth and a more blank, fitted headpiece. And dare I say it, as close to cloth faces as would work in 2012.

Sadly, the Doctor Who production team have asked that no pictures be taken, but Gabundy has made a rough sketch of what the new Cybermen look like, which you'll be able to see below.

As for the episode itself, Gabundy gives us an interesting report about a particular scene that was filmed on Nov. 8 at Castell Coch in Cardiff:

The scene seems to be set in a (maybe abandoned?) theme park called Hedgewick's World. The park map showed rollercoasters, ghost trains and boating lakes and sand dune rides. This particular scene was inside Natty Longshoe's Castle — a faux medieval fortress complete with dressed dummies, instruments of torture and signs pointing to shops and exits (they were props, not Castell Coch items). It seems a rag-tag bunch of fighters are taking refuge here from a Cyberman attack. Jenna was wearing a military insignia on her jacket, sort of like a set of gold wings with branches circling.

The Cybermen appear out of smoke towards Clara, creeping slowly towards her. She grabs a mace, and swings it all over the place, hitting them. It doesn't do anything, so she accepts defeat and throws the mace away in anger, then dodges the Cybermen and escapes! Army people with big guns come and shoot the Cybermen, and the Cybermen fire their arm guns back, hitting some of the soldiers.

And here's the Cyberman sketch by Gabundy: 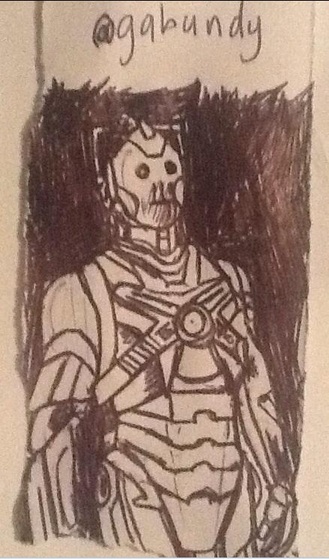 What do you think of the whole redesigned Cybermen look?

(via Doctor Who TV here and here)