For nearly three decades now it's been impossible to see Jonathan Frakes as anyone but Jean-Luc Picard's "Number One," Cmdr. William Riker. But there was a time before Star Trek entered his life when Frakes had a lower-profile gig as another iconic sci-fi character. Behold Jonathan Frakes: The First Avenger.

It seems that back in the late '70s, when Frakes was still a young actor looking for his breakout role, he picked up a gig from Marvel Comics. He went to comic conventions, malls and other special events and played Captain America, skintight red-white-and-blue suit and all. He even made it to the White House to launch something called the "Captain America Youth Energy Conservation Program." 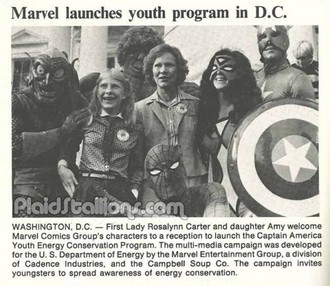 Here he is again, for the same program, strutting his stuff on the White House lawn. 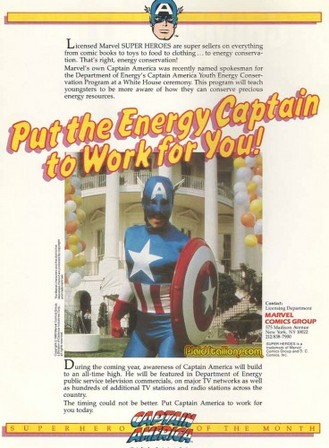 Yikes, and we thought those Starfleet uniforms looked uncomfortable. Of course, Frakes eventually went on to theater and a few TV guest spots before landing the role of a lifetime, and Captain America just became a thing he did way back when to earn a living. But hey, if you were a kid attending a comic convention in the late '70s and you recognize this particular incarnation of Cap in a souvenir photo, congratulations; you were standing next to a future sci-fi icon.

(A Distant Soil via Comics Beat)