The guys at the Prop Store of London know that the stories behind sci-fi props can sometimes be as fascinating as the props themselves. That's why they'll be popping up on Blastr from time to time, taking a look at the untold stories of some amazing objects from movies and TV—such as the Nostromo spaceship from Alien, which was left under a tarp on a driveway for two decades until it was rescued and restored.

It's impossible to say where modern sci-fi might be without Ridley Scott's Alien. At the center of the seminal 1979 film was not only the psycho-sexual design of H. R. Giger, but also the space tug upon which ninety percent of the film took place: The Nostromo.

Designed by self-professed "frustrated engineer" and conceptual artist Ron Cobb, the spaceship Nostromo was envisioned as the product of a science-fiction world that was industrial, lived-in, and—more than anything else—real. Using Cobb's design, the British visual effects team led by Brian Johnson then scratch-built an eleven-by-seven foot model ironically termed a " filming miniature." By the time it was delivered to the production the Nostromo would weigh more than 500 pounds.

Luckily, the sci-fi community had a man in their corner named Bob Burns.

The basement of Los Angeles resident Bob Burns has become a famous Mecca to sci-fi and horror fans everywhere, as that is where he keeps one of the greatest collections of authentic movie memorabilia in the world. Just before Halloween in 1979, Burns called 20th Century Fox seeking permission to give his famous Halloween show an Alien theme that year. To his great surprise, Fox responded by sending Burns many of the actual production assets from the film. The studio was happy to clear the space in their storage facilities and bequeath the assets to Burns's collection where they would be appreciated and enjoyed by fans of the film for years to come.

The Nostromo was soon delivered to Burns where it was lowered into his driveway. By crane. Even if his generously-proportioned basement-cum-museum had existed at the time (it didn't), it wouldn't have been big enough to house the space-hogging space tug. So there the Nostromo would sit—in Burns's driveway—for roughly the next two decades, exposed to rain and heat and covered by little more than a few plastic tarps. 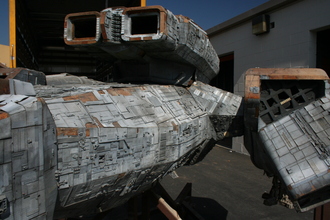 In the late 1990s, Burns reached out to a couple of close friends working in visual effects industry to help him rescue the Nostromo. Greg Nicotero and Howard Berger of KNB Effects were huge Alien fans and eagerly took in the Nostromo like some kind of sci-fi foster child. They intended to rehabilitate and restore the miniature themselves, but production gigs kept preventing them from completing their passion project. So while the Nostromo was now safe, dry and cool, it would be another eight years before anything was done about its condition.

That's where Stephen Lane and his rescue ship The Prop Store of London come in. In 1998, the England native turned his hobby—collecting original movie props and costumes—into a full-time business. But as a collector first and foremost, Lane's work drew from a well of immense passion and was pursued with a largely conservationist bent—a kind of "movie archaeology," if you will. When Lane and his Los Angeles counterpart Brandon Alinger first laid eyes on the Nostromo, they couldn't wait to get it fixed up and restored. KNB agreed to allow them to shepherd the process.

The ideal scenario for the restoration would have been to reunite the model with its creators, Brian Johnson and his Alien visual effects team. Unfortunately, the Nostromo's bulk and condition precluded the possibility of sending it back to the United Kingdom. So Prop Store turned to the next best thing: the guys who practically invented sci-fi movie model making when they first worked on a little film called Star Wars. 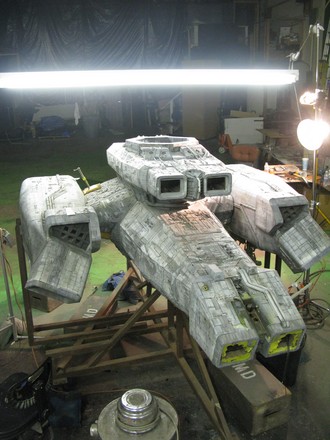 Grant McCune Design modeler maestros Monty Shook and Jack Edjourian captained the restoration. It was very important to both them and to Prop Store to keep the Nostromo as true as possible to its original makeup. The goal was an archival-quality restoration—the kind a priceless artifact like the Nostromo deserved.

The first step was a thorough cleaning of the model's hollow interior, and Edjourian couldn't believe what he found. Much like the ship in the movie, this Nostromo also had an unwelcome stowaway. Thankfully, this one wasn't an acid-bleeding xenomorph. It was an opossum. Two of them, in fact. Both of them were very dead, reduced to no more than skeletal remains over the years after having crawled inside the model miniature seeking shelter.

The cleaning also revealed the true extent of the Nostromo's structural distress. Between drenching Southern Californian rainy seasons and the wood-and-plastic-splitting heat of the following summers, the miniature was shrunken and warped from its time spent in the elements. Grant McCune design began the physical restoration by re-clamping and re-gluing the wood understructure in an effort to get the model both symmetrically and structurally sound again. This process took weeks of man-hours alone, but it was the most important step in ensuring the Nostromo decades of longevity to come.

Once the model was structurally sound again, the real fun could begin for the self-professed "model geeks" at Grant McCune Design. The restoration team was looking at the world's greatest jigsaw puzzle: tables worth of tiny styrene detail pieces that had separated from the Nostromo's understructure over the years. Most of them were just a few square inches in size. This was because the Nostromo was originally constructed using the parts from off-the-shelf model kits in a model-making method called "kit-bashing."

Kit-bashing was popularized by Grant McCune and John Dykstra during their early days working on Star Wars. In their continued efforts to remain as faithful to the Nostromo's original construction as possible, the team at Grant McCune Design kit-bashed the restoration in much the same way the original was built. They were able to track down many of the same original model kits that had been used nearly thirty years earlier. As most of the kit parts were used over and over again on the original model, the restoration team employed silicon molds to fabricate duplicates that were one hundred percent accurate to those used in the original build. One piece at a time, Grant McCune Design would restore the Nostromo to her original state. They would mold, pull, heat, shape, and glue again and again for weeks to come.

When it came time to paint the Nostromo, the intent was to not alter the original paint wherever possible, instead focusing only on the restored sections of the ship while using the sections with the original paint as a guide. To achieve this look, they applied six different tones of airbrushed gray in a patchwork. Then, to make the ship appear weathered, they laid a chalky wash over refurbished sections before finishing it with a wet, dark wash that would "age" the new paint. In the end, no one could tell what had been repainted and what was original. 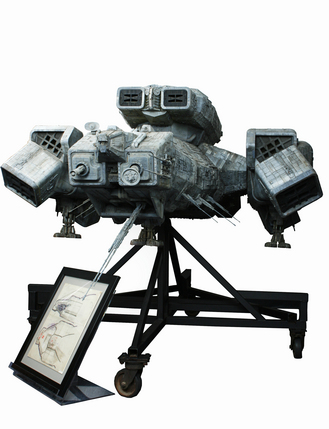 The entire restoration took the better part of a year in between deadline-driven film and TV jobs, with Shook, Edjourian and four other artisans spending the equivalent of three months of full work weeks on the Nostromo. This restoration goes far beyond being some hobbyist's passion project—it's the work of a film historian attempting to preserve a crucial artifact from one of the medium's genre landmarks. Without Bob Burns saving the Nostromo from the rubbish pile at Bray Studios, KNB Effects' rescue and, most importantly, without Prop Store's final intervention, the fans and the annals of movie history would have only memories to cherish.

Raised by Wolves creator says it's a 'close cousin' to the Aliens universe, but doesn't quite 'link up'
Astronomer: 6 reasons why aliens would NEVER invade Earth

Instead, thanks to the dedicated and forward-looking few, we have the Nostromo. In her full, former, industrial glory.