It just wouldn't be the annual American International Toy Fair without a plethora of new Star Wars-related toys for kids—and, more importantly, the Star Wars-obsessed kids at heart—to drool over. Believe it or not, 2010 marks the 30th anniversary of The Empire Strikes Back, so licensors are releasing a bunch of nostalgic collectibles to celebrate one of the best sequels ever made.

We've got a first look at the most notable of the new toys, which you can view in the gallery below the story.

Mark Hamill confirms that he IS Sebastian Stan's father...sort of
The Mandalorian Season 2 ended with its boldest Star Wars move yet. And, no, it's not fan service.

Aside from a whole lot of Hoth dominating the lineup at Lego and Hasbro, we also spied quite a few other companies offering creative twists on the typical Star Wars fare. Of course, some ideas are more successful than others, with a few items being downright bizarre. Regardless of what ultimately gets your money this year, you've still got to see some of these things to believe them.

As such, we've assembled our list of the Top 10 Good, Bad and Ugly Star Wars Toy Fair Items of 2010. 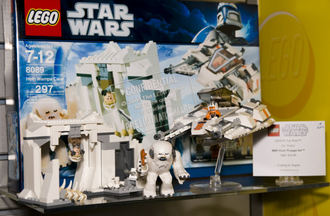 Star Wars Lego sets are a minor religion to some, and that's because the Lego designers know how to create sets that instantly spark a fire in nerd hearts. Who doesn't want their own Lego Wampa to torture an upside-down frozen Lego Luke Skywalker? If you don't know what I'm talking about, then I don't want to know you.

From the Star Wars: Clone Wars line, this electronic lightsaber is a clever spin, literally, on the oft-done Jedi sword. Like the Darth Maul model, this lightsaber is double-sided, with two detachable ends (one is blue, the other green), but this one also features a circular center handhold that allows a Jedi-in-training to spin his lightsaber like a really scary baton from hell. You may lose an eye, but oh, the fun you'll have losing it.

Perhaps the Holy Grail of scale collectibles, the 2-foot-tall, 28-inch-wide AT-AT holds a freakishly cool 20 (count 'em! 20!) action figures and includes its own AT-AT driver figure. There are LED chin blasters that make the noises from the movie, and also sayings from Darth Vader himself. There's also a working winch that lowers from the body and a back that pops open to reveal a speeder bike. This sucker is so accurate that even the feet were created to scale, so you can authentically cover and crush any rebel scum soldier you want. (Image above and below)

In keeping with The Empire Strikes Back celebration, Hasbro dug deep into the old Kenner archives to create this new line of action figures based on the originals released in the '80s. Re-sculpted with better detail, paints and likenesses, the new action figures are packaged in the old-school Kenner blister packs, right down to the classic fonts. For the purists, the back features an image of the original figure so you can compare and contrast to your heart's content. They are even releasing the legendary unreleased Echo Base Han, which never made it to stores back in the day. Lastly, if you purchase five figures and mail the proof-of-purchase sticker to Hasbro, they'll send you a specially packaged Boba Fett.

If you were a kid in the late '70s or '80s, then there's a good chance you seriously lusted over the playscale Millennium Falcon. Granted, if you were lucky enough to be gifted with such greatness, you quickly learned about disappointment as soon as you figured out it couldn't fly. Fast-forward 30 years, and now you can have the flying version with the Millennium Falcon remote-control RC. With a circulating fan at this model's core, it won't be long before you are piloting just as well as that Solo character.

It's nice, and rare, to see Lucasfilm lighten up enough to let its Star Wars licensors produce something really fresh and creative. Funko has done that with its monster versions of Darth Vader, Yoda, Chewbacca and a stormtrooper. Ghoulish and delightfully creepy, these bobbleheads are a truly unique twist on the Star Wars norm.

Not that long ago, sculpted or themed USB drives cost a pretty penny for the average consumer. But with the recent drop in drive prices, it's now a lot more affordable to carry around your mobile data in style. Tyme Machine now offers Star Wars geeks 4GB, 8GB and 16GB drives featuring Darth Vader, Yoda, Boba Fett or a stormtrooper. 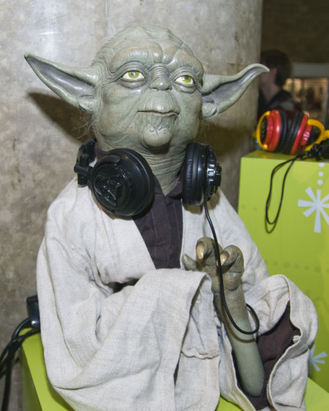 Who knew Yoda liked to spin some tunes? We're not sure if the uber-hip world of DJing has mixed much with the nerdy Force of Star Wars fans, but these new DJ headphones are trying to bridge the gap between the two. Featuring stormtrooper, Darth Vader, X-Wing and C-3PO ear covers, these geeky accessories hopefully won't get you thrown out of the club. Good luck with that.

This rather bland ankle-biter RC is supposedly based upon a Droid design. As Yoda would say: the connection, we don't see. Matter of fact, there's not much Star Wars in any part of the design, as it looks more like a metal spider that shoots plastic projectiles. FAIL.

You better live alone if you want to decorate with these squat oddities based on a stormtrooper, Darth Vader and Boba Fett. The light shade is the head, while the base body serves as the LED alarm clock and the plug-in dock for your MP3 player of choice. Here's a helpful hint: Keep these guys hidden in the closet if you ever get a female to visit.

Which is your favorite?