The X-Men Team Up With ... Kirk & Spock? The 8 Most Bizarre Comic-Book Crossovers

Think Superman needing Batman's help is unlikely? The release of the latest Punisher flick reminded us of one of the strangest comic-book team-ups ever, plus seven more ridiculous pairings that have to be seen to be believed. And get ready for one more crazy duo that beat the odds and ended up being pretty awesome.

Punisher creator Gerry Conway: Cops using the skull logo are like people using the Confederate flag
How Westworld and The Punisher taught Ben Barnes to be a master at keeping secrets

In this 1996 one-shot, circumstances too complex to elucidate here transport Marvel's merry mutants to the Enterprise of the original series, where they help Kirk's crew deal with a menace that is half their reality-altering villain Proteus, half Kirk's omnipotent old friend Gary Mitchell. Although Spock has occasion to give Wolverine the Vulcan neck pinch, the single best moment may be when somebody calls for Dr. McCoy, and both Kirk's medical officer and the X-Men's Beast respond, "What?" The special was popular enough to be followed by another comic book, and paperback novel, in which the mutants went on to team with the newer Enterprise of Star Trek: the Next Generation. Maybe that explains why Charles Xavier and Jean-Luc Picard were later played by the same actor. 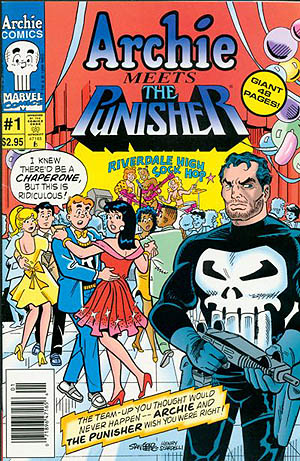 In this bizarre 1994 one-shot (published simultaneously by Archie and Marvel comics, respectively, as Archie Meets the Punisher, aka The Punisher Meets Archie), the gun-toting vigilante tracks a thug with an uncanny resemblance to a certain all-American teenager to Riverdale, where hilarity and gunplay ensue. Its single goriest image may be the Punisher giving Archie's teacher Miss Grundy a chaste kiss on the forehead. The book is notable for its bravura collaborative art, with everybody in the Archie gang drawn by that series' regular artist Stan Goldberg and the Punisher walking around in the grittier style of Marvel mainstay John Buscema.

Daredevil Is Fooled by Uri Geller 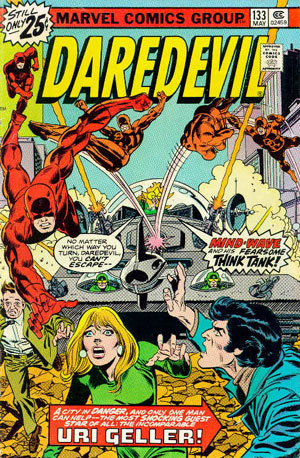 Imagine the real-life Uri Geller fighting a supervillain beside the blind defender of Hell's Kitchen. Daredevil would find himself swarmed by an army of Japanese ninja and in desperate need of help. He'd call out to his crimefighting partner, Uri Geller, who'd bend a spoon with his thumbs. "Gee, thanks a lot," Daredevil would cry. "I'm still dealing with ninjas here!" Geller was actually more helpful in Daredevil #133 (1976), where he was a powerful telekinetic and international adventurer who used his vast mental powers, and not his thumbs, to make nearby iron bars twist and imprison the villain. 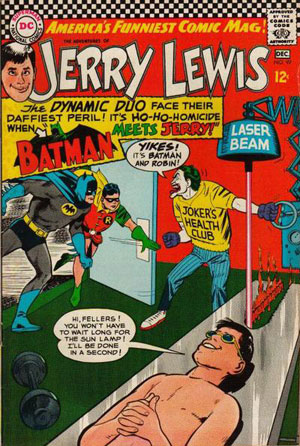 In the 1960s, the prospect of Batman teaming up with the comedian often caricatured as yelling, "Oh, lady!" was once not nearly as unlikely as it seems now. In The Adventures of Jerry Lewis #97 (1966), Batman and Robin team with Jerry to take down a supervillain known as the Kangaroo, who has attracted the wrath of the Joker, among others, and if you truly want an illustration of how much characters can change over time, just imagine how much different this story would likely have been had the Joker in question been the one played by Heath Ledger. "Oh, lady!" "Very funny. Here, watch me make this pencil disappear."

Spiderman Gets No Laughs on Saturday Night Live 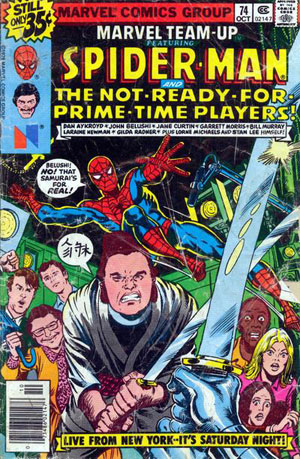 In Marvel Team-Up #74, Peter Parker abandons his date Mary Jane in the studio audience of Saturday Night Live (on a night that Stan Lee's hosting) to fight alongside the Not-Ready-for-Prime-Time Players. It all has to do with a teleportation ring mailed to one J.B. Lu-Shi that has somehow gotten stuck on the finger of John Belushi. The story doesn't bear close scrutiny: I mean, John Belushi not making an on-screen appearance until the show's very last sketch?

Get Out Of Here, You Kryptonian Hockey Puck 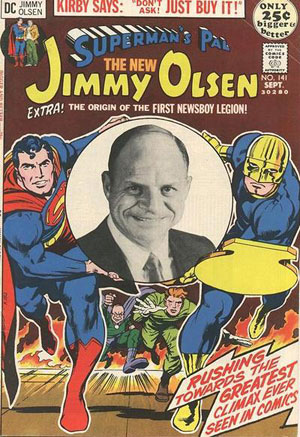 It took Jack Kirby, one of the greatest comic creators of all time, to imagine the delirious happenings of Jimmy Olsen # 141, a bizarre toss-up involving "Goody Rickles," a clone of the insult comedian Don Rickles who has been injected with a substance that threatens to turn him into a human fireball. Second-stringers Lightray of the New Gods and the Guardian handle what little needs to be done, and Superman shows up just in time to be glad he missed most of it. This may be the least cosmically awesome tale Jack Kirby ever had anything to do with.

The Avengers Appear on David Letterman 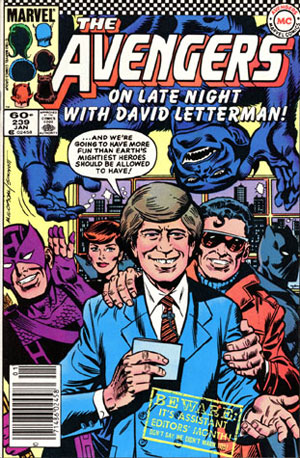 In Avengers #239 (1984), members of the titular super team enjoy a guest shot on the David Letterman show, during which they're attacked by the loser supervillain known as Fabian Stankowicz, the Mechano-Marauder, a low-rent inventor whose frequent humiliations at the hands of various superheroes was Marvel's then-current running gag. With the heroes busy fighting Stankowicz's inventions, it falls to Letterman himself to knock the bad guy unconscious with a giant doorknob. 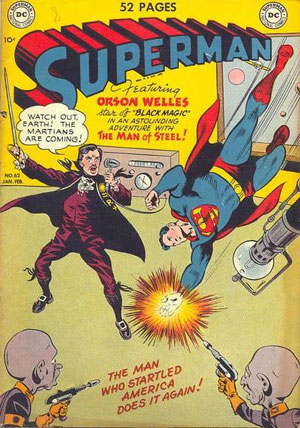 In this story published in Superman # 62 (1949), the genius behind Citizen Kane finds himself trapped aboard a flying saucer on its way back to Mars. Discovering that the little buggers intend to invade, Welles fights his way to a radio transmitter and broadcasts a warning to Earth ... which, of course, has already had more than enough of his tall tales about Martians. Lois Lane, for one, wonders, "Who does Orson think he's kidding?" Fortunately, Clark Kent believes, and the Martians are soon battling a combination of Kryptonian brawn and Wellesian theatrics.

Superman Gets His Butt Whupped by Muhammad Ali 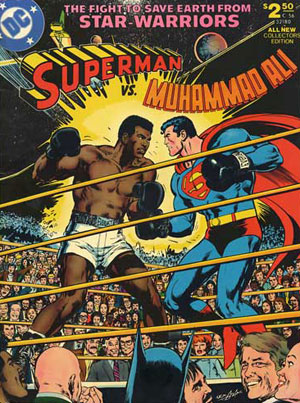 SUPERMAN VS. MUHAMMAD ALI? Believe it or not, this 1978 crossover is actually one of the great superhero team-ups of all time, and packs a genuine wallop. The characters are forced to fight when Earth is threatened by an interstellar dictator who says he'll leave us alone if our champion can defeat his. The qualifying bout under a red sun leaves Superman looking like about 200 pounds of raw hamburger. And that's before the main event! The crossover succeeds at the nigh-impossible feat of telling a great Superman story and a great Muhammad Ali story.