Are Star Wars fans done drinking the George Lucas Kool-Aid? Die-hard lovers of the original films are riled up over the latest changes made for the Sept. 16 Blu-ray release. Between Ben Kenobi's altered Krayt Dragon call, blinking Ewoks and Darth Vader's overdramatic "Nooooo" being added, fans ... are ... pissed!

Lucas' constant tinkering has become a turnoff, and even the most loyal Star Wars fans can't take it anymore. After the director confirmed to the New York Times that "Nooooooo!" has been added to one of the most pivotal moments in the entire series—it was the straw that broke the camel's back. There have been rumors of boycotts, petitions and plenty of confirmed web outrage.

Exclusive: Learn the story of Frankenstein in BTS clip from Death Race: Beyond Anarchy
Is Shout Factory's Blu-ray for The Return of the Living Dead the definitive version? 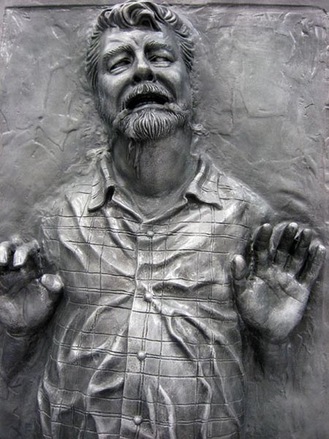 We've found 10 of the most brutally honest fan comments about Lucas' latest changes. We know the truth hurts ... and in this case, it needs to.

1. "I don't have a Blu-ray, so I was never going to buy this, but now I wonder if there is a way to ANTI-buy something. Has any filmmaker committed such an aggressive form of reputation suicide worse than Lucas?" - eratliff604 [Badassdigest]

2. "I've defended Lucas for years, despite additions that I hated. 'Well, you may hate his tinkering, but he still gave us the greatest movie trilogy of all time.' But I gotta say... something so small and so unnecessary and yet so damaging to the scene... I'm starting to understand why so many fans despise Lucas." - Cris [EW.com]

3. "George Lucas, if you're reading this: Please, please stop. All the awe, all the respect, all the reverence that was given to him 20 years ago evaporates a little more every time he makes these thoughtless alterations. Instead of going down in history as one of cinema's greatest movie-makers, he'll go down as exhibit 'A' for when a single person gets too much control over massive IPs and is accountable to no one. Star Wars may be his, but it's a large part of my youth as well, and I resent his brainless actions." - James Gray [NY Times]

4. "Anyone else beginning to see Lucas as Mr. Blonde? 'Look, I'm not going to bullsh1t you, ok? I don't really give a good f*** what you do or don't want to see. But I'm going to edit the movie anyway. Regardless. Not to make the movie better. It's amusing to me to torture the fanboys. You can say anything you want 'cause I've heard it all before. All you can do is pray for a cheap retail price...which you ain't gonna get.'" - Madopal [Boing Boing]

5. "I took my old VHS editions (pre-1997) and transferred them to DVD long ago. What if Picasso saw fit to go back and retouch paintings he had done earlier in his career? They'd be worthless now. I mean, how contemptuous can you get of your fans?" - Eric [The Nerdist]

6. "Okay, this is probably enough now to completely ruin the films for me. That teenager-kicked-in-the-balls sound Obi Wan makes is too laughably bad to believe. I mean, it has to be a joke, right? The obviously re-cycled 'noooo' I could buy, I mean they did it before with 'even I get boarded sometimes.' At what point does Ben Burtt throw up his hands and say 'I'm not f***ing doing that, George, I have a reputation to think of.' I wouldn't be at all shocked if they dubbed over Lando Calrissean's lines with Harvey Fierstein." - Fasciola Hepatica [Badassdigest]

7. "You can volunteer to let George Lucas continue to punch you in the groin if you'd like but this is the proverbial straw that broke for me. Adding Vader's 'NOOOOOOOOO!' over the scene where he pitches the emperor into the shaft at the end of RotJ is just going too far. I should've quit buying this stuff years ago on my wife's recommendation but I was unable to see the light at that time." - J. Druley [JSOnline]

8. "He is never happy with them, and I get that, but you can't add new effects every three years to sucker us out of more money. New scenes, characters, effects, ships, and a new way to blow up a star. As a filmmaker, of course you always have slight regrets, and a film is never as good as you wanted it to be, or exactly how you pictured it being, but for Luke's sake, George, let it be. Spend your days making new movies, Spielberg hasn't changed the way ET's ship takes off, or fixed the continuity problems in Jurassic Park. If you need a hobby project, then go back and fix THX, cause that one sucked, and at lease you don't have any fans to upset." - Adam Murphy [Deadline]

9. "Lucas is turning out to be Darth Vader himself. At first he was the good guy, but then became the true villain of the Star Wars saga. One can only hope he'll repent on his death bed, though by then I can't imagine very many will care anymore." - Graysmith [Boingboing]

10. "I wonder if with changes every 3 years or so, by 2045 the films will be so different, that they are gonna have to release the original trilogy unedited in Red Ray 3D (Blu-ray will be like VHS by then) all over again, with small alterations here and there, until there's the final Red Ray 4D Ultimate Mega George Lucas Jr. Edition featuring the 6 original movies + 2011 Blu-ray Re Edition + Post converted 2D director's cut with 6 bonus features and the theatrical release including deleted 2D scenes post-converted to 3D but with the 2011 Blu-ray alterations... uffffffffff... stop milking it, please. Please." - DyeLorean [/Film]

After reading that, your computer screen should be hot with rage. The general consensus is that the changes are ridiculous and are hurting the original material. So at the end of the day, will you still cave and buy the Blu-ray edition of Star Wars? Be honest!