The 10 Star Trek movies so far, and why they mattered

As J.J. Abrams' Star Trek beams into theaters on May 8, it seems like a good time to look back at the 10 movies that have previously gone where no one has gone before.

It's been 10 films and 30 years since Star Trek was reborn on the big screen. The full list follows. 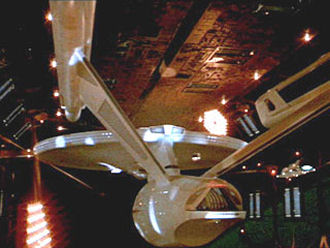 Star Trek: The Motion Picture (1979). The crew of the U.S.S. Enterprise reunites in order to investigate a space probe that's undergoing an identity crisis.

Why It Works: The film combines science fact and fiction to re-establish the series' allegorical underpinnings.

Why It Sucks: It's long and freakin' boring.

Why It Matters: The film reunited the original cast, proved the series' commercial viability on the big screen and vindicated generations of fans who loved the original show. 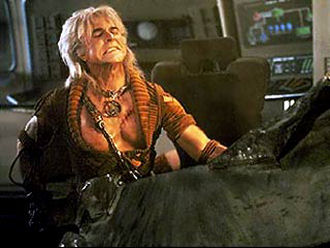 Star Trek: The Wrath of Khan (1982). Kirk's old foe returns to serve up a cold dish of revenge on the eve of Starfleet's new scientific breakthrough.

Why It Works: It gives Kirk his most famous line of dialogue in the theatrical era, pits him against an iconic, formidable adversary and has the cojones to kill off an equally iconic cast member.

Why It Sucks: Many of the effects leave much to be desired by today's standards, although Khan's hair and chest are by far the best of them. (For the humor impaired: We know it's his real chest. It's a joke.)

Why It Matters: Of all the films, it has the strongest narrative connection to the original series, and it established the rule that even-numbered Trek films are better than odd-numbered ones. 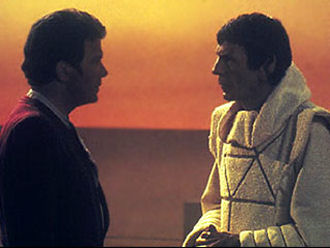 Star Trek III: The Search For Spock (1984). Kirk and company defy orders and steal the Enterprise to track down Spock's body, while a Klingon commander tries to intercept them to steal the Genesis technology for himself.

Why It Works: In addition to giving Kirk another substantive foe, the story makes terrific use of the Kirk-Spock-McCoy chemistry, even without Spock in it very much.

Why It Sucks: If killing a character just to bring him back isn't bad enough, introducing an "important" new one just to kill him off is even worse.

Why It Matters: In addition to being the first film that Leonard Nimoy directed, the film celebrates the values of friendship and loyalty that historically provided a foundation for the characters and their adventures. 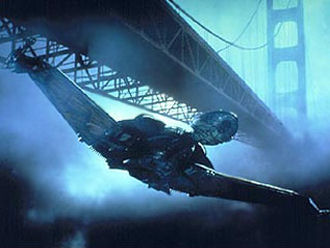 Star Trek IV: The Voyage Home (1986). Borrowing a Romulan Klingon Bird of Prey, the Enterprise crew goes back in time to find humpback whales that can speak the language of an alien race that is inadvertently destroying the Earth.

Why It Works: Some terrific comedy comes from the crew's encounters with present-day (i.e., 1986) culture, including the best insult of all time, "double dumb-ass on you!" Also, whales.

Why It Sucks: See "Why It Works." Also, for a movie about time travel, the film is dangerously unconcerned with the technicalities of the process and relies on a lot of convenient coincidences.

Why It Matters: By far the series' biggest mainstream success, it legitimized Trek to non-fans, paving the way for Star Trek: The Next Generation on TV. 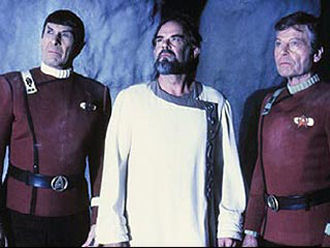 Star Trek V: The Final Frontier (1989). Turns out Spock has a brother, and he's a crazy religious zealot who'll stop at nothing—including hijacking the Enterprise—in order to talk to God.

Why It Works: The crew members have illuminating visions of their past, which fill in interesting background details.

Why It Sucks: Redundant villains (Klingons). Also, seriously: Of all things, God is the final frontier?

Why It Matters: Largely irrelevant in the Trek canon except as the only entry that Shatner directed himself. 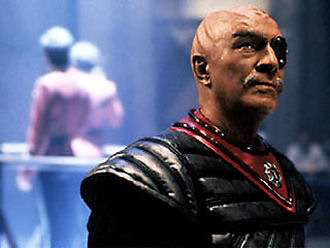 Star Trek VI: The Undiscovered Country (1991). On the eve of brokering a peace treaty with Starfleet's oldest foe, Kirk is charged with murder and conspiracy when the Klingon chancellor is murdered.

Why It Works: Thanks to its thematic references to perestroika and its effective theatricality, the film has a great story, terrific momentum and real dramatic heft.

Why It Sucks: Twenty-five years into their mission, these actors look old.

Why It Matters: The final film featuring all of the core members of the original Enterprise crew. 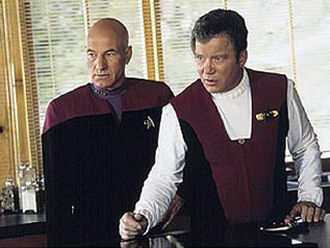 Star Trek: Generations (1994). After Kirk disappears while saving the new crew of the Enterprise, his future successor, Jean-Luc Picard, encounters a scientist whose work may hold clues to his whereabouts.

Why It Works: It effectively introduces TNG cast members into a film franchise that was previously the sole domain of TOS stars.

Why It Sucks: Satisfying the demands of so many different plot lines doesn't make for compelling storytelling. Plus, it's as boring as The Motion Picture.

Why It Matters: It bridged the gap between different generations of Star Trek and offered a final, controversial hurrah for the heroism of James T. Kirk. 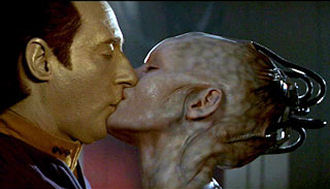 Star Trek: First Contact (1996). Picard and company go back in time to save Earth from the Borg and help Zefram Cochrane invent warp drive.

Why It Works: In addition to merging lore from the original series with storylines from The Next Generation, the film introduces the Borg Queen, the closest thing to a Khan-style adversary so far.

Why It Sucks: Its time travel is poorly conceived, Frakes' direction eliminates true suspense, and Picard goes uncharacteristically bats--t in his vendetta against the Borg.

Why It Matters: Introduces a new foe into the Star Trek theatrical canon and offers the Next Generation crew their first full-fledged adventure on the big screen and one of the more successful installments of the franchise. 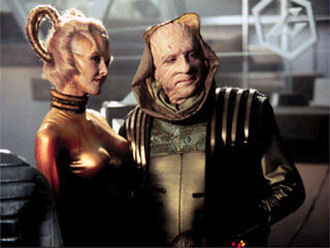 Star Trek: Insurrection (1998). The Enterprise comes to the rescue when a race of stretchy-faced aliens led by Salieri tries to destroy a colony of beautiful white people who hold the secret of eternal youth.

Why It Works: Rekindles Troi and Riker's on-off romance and leaves it on, while Picard gets to look and act spry.

Why It Sucks: The story is largely irrelevant, or at least no more relevant to the Next Generation characters than an average episode of the show.

Why It Matters: The Next Generation equivalent of Kirk's dilemma in The Search for Spock, where a long-held ideal (no less than the Prime Directive) challenges the characters' professional and personal obligations. 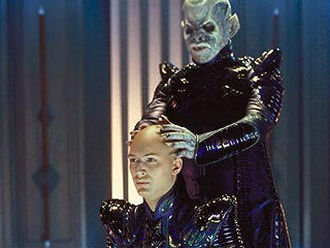 Star Trek: Nemesis (2002). A Reman who turns out to be Picard's dreamier clone threatens to destroy a tenuous peace that Starfleet attempts to broker with the Romulans.

Why It Works: Frakes is not its director, which means that it boasts a modicum of cinematic style.

Why It Sucks: Very, very soap-opera-ish, the film has a main character who isn't a member of the established cast but appears to be the villain, and it steals shamelessly from other Trek films, particularly the cloaked ship that can also fire that was invented for The Undiscovered Country.

Why It Matters: It adds little to the mythology of the franchise in any significant way—Remans? really?—and underscores the difficulty filmmakers continue to have making stories that are "big" enough for Trek on the big screen.