Sci-fi, fantasy and horror movies are filled with creatures who are supposed to be so horrifying that men freeze in place and women burst into eardrum-shattering screams at the very sight of them. But some of these monsters intended to boggle our imaginations were the product of folks who wouldn't know what was scary even if it shuffled up and bit them.

There's a reason why so many of these creatures shamble so slowly: They're lame. Here are a few of our favorites. 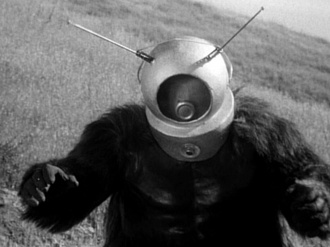 Ro-Man was the notoriously desperate improvisation of poverty-row director Phil Tucker, who couldn't afford to provide his tale of worldwide apocalypse with an actual "robot monster" and therefore gave us a fat gorilla in a modified diving helmet. This would have been bad enough if he hadn't spent so much time communicating with his supreme leader on an interstellar radio that spews soap bubbles.

Mind you, Tucker wasn't trying to be funny. He was actually serious—as evidenced by his monster's climactic speech, a minor masterpiece of failed angst. "I cannot—yet I must!" Ro-Man cries, making wild hand gestures that fail to match the rhythm of his words. "How do you calculate that? At what point in the graph do 'must' and 'cannot' meet? Yet I must—but I cannot!" These might have been the very words of his acting coach.

Giant Bunny Rabbits Appeared in Night of the Lepus (1972) 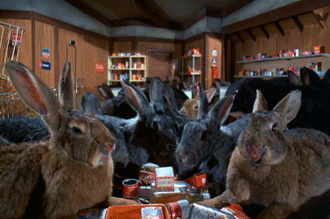 A horde of hideously mutated "rabbits," played by normal-sized, normal-looking everyday rabbits, runs amok on miniature sets while thunderous stampede noises play on the soundtrack. For any audience watching this film, it's impossible to forget that the rabbits are just rabbits—and for the most part pretty cute rabbits, at that, even as they cavort around miniature cars. Their unlucky human victims, who weren't privy to how lame all this would look on screen, throw up their arms and scream in feigned horror, adding to the overall hilarity. 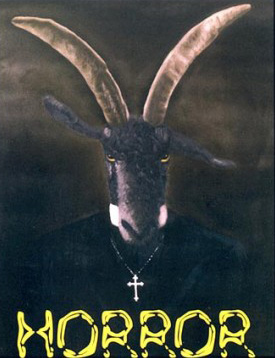 It's not easy to determine what's going on in this awful low-budget horror film; it might be a series of random hallucinations, it might be an invasion by supernatural forces, and it might just be writer/director Dante Tomaselli throwing whatever he has on the screen in hope that something sticks. The most notable recurring element is a long-horned goat, who wanders in and out of the action, looking lost, while people scream in unimaginable terror every time they see it.

It is clear that we're supposed to consider the goat inherently frightening. At one dramatic highlight we get a point-of-view shot from something raging and demonic racing up a flight of stairs, then cut away to an establishing shot of the goat, lackadaisically clopping around at the first landing as it wonders when it's getting its next mouthful of hay. It's genuinely impossible for even the most indulgent audience to give the movie the benefit of the doubt on this. The goat didn't just race up that flight of stairs. Somebody carried it there.

It's just a goat.

Ed Wood possessed some home movies of Bela Lugosi sniffing a flower and walking out the front door of his modest home. He somehow saw this as the fine centerpiece for an alien invasion film. Billing this as Lugosi's "final performance," he hired a chiropractor who looked nothing like the one-time star of Dracula to stomp around hiding most of his face behind a vampire cape, in the apparent belief that nobody would notice that "The Old Man" was mostly being played by somebody else.

Again, it's impossible for even the most indulgent audience to give the resulting movie, Plan Nine From Outer Space, the benefit of the doubt on this. It doesn't work at all, and if the film is still watched with heartfelt appreciation today, it's because the editing of Lugosi's "final performance" is not even close to being the most incompetent element on screen.

The Rubber Octopus Appeared in Bride of the Monster (1955) 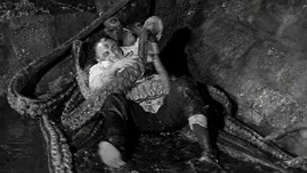 Ed Wood again. In order to show mad scientist Doctor Vornoff's death at the tentacles of the giant octopus he's created, he directed star Bela Lugosi to flail around on the largely immobile beast and pretend to be fighting with it. Contemporary accounts differ on whether Wood stole the octopus from a studio warehouse or rented it. But whatever he paid, even if it was only gas for the vehicle that carried it to and fro, he was overcharged. The effect is just embarrassing.

The Master may be a cult leader, or a demonic wizard, or just a retired bassist living with a deformed roadie and a bunch of devoted groupies in East Texas. In any event, the notoriously awful film bearing his name has long since abandoned any pretense of being any good by the time he shows up, which is why his horrific doings consist of staring at the camera and spreading his arms wide enough to show us the sleeve length of that robe he wears. Somebody thought this trick so dazzling that Manos performs it multiple times.

All in all, this is the only film on the list that could have been improved by the goat from Horror.

The Giant Anti-Matter Buzzard Appeared in The Giant Claw (1957) 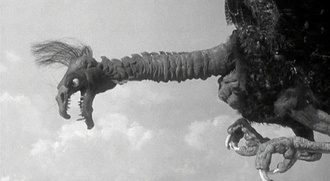 Arguably the stupidest-looking monster puppet in the history of grade-z science fiction films, and the main reason Americans had no business making fun of Japanese Godzilla movies, this was a giant anti-matter bird from outer space that attacked planes and buildings and might have been weakened, not by the "mu-mesons" the hero scientist finally employs against it, but by the psychic force of all the incredulous laughter audiences erupted into whenever it appeared on screen. 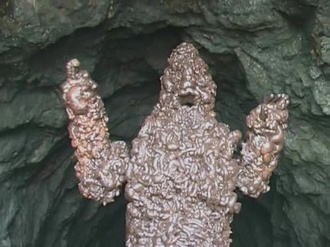 An escaped killer suffers a transformative event in sewage and emerges as the ravenous, murderous ... Monsturd. The resulting movie sounds like it could be rude lowbrow fun, but it really isn't; it's just gross and fecal and unpleasant to look at. It's a film that really is to movies what the substance of its monster's body is to that suspicious burrito you had yesterday. 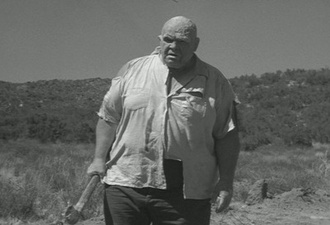 Swedish wrestler Tor Johnson, who beats Denise Richards hands-down as perhaps the least likely actor ever to play a nuclear scientist, is Dr. Joseph Jaworsky, who an atomic explosion transforms into ... essentially the same guy, only with ripped clothes and facial burns that, in the words of critic Bill Warren, "look more like bubble gum." He lurches around throwing rocks and waving sticks and is ultimately mortally wounded, only to be comforted in his death throes by a little bunny rabbit that scurries over to lick his face.

The rabbit was a desert native that improvised its part without any prompting from the script. We'd like to think that any nuclear fallout it ingested from Tor's cheek contributed to the events of Giant Lepus. Incidentally, this movie was re-released, once, with the new title "Girl Madness." We're not responsible for this fact.

The Big-Eyed Alien Invaders Appeared in Killers From Space (1954) 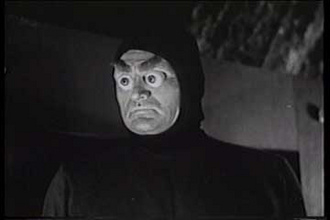 The most interesting thing about this spectacularly inept film is not its alien invaders, whose bulging eyes appear to be bisected ping-pong balls with pupils drawn on them. Nor is it the long, repetitive action climax, in which unfortunate star Peter Graves runs through a cave recoiling from stock nature footage which we are supposed to take as horribly mutated giant insects. No, the most interesting thing about this film is that its helmsman, W. Lee Wilder, who made several of equal awfulness that establish him as one of the very worst directors of all time, was the brother of Billy Wilder, who happened to be one of the all-time best. Genetics are odd, sometimes. 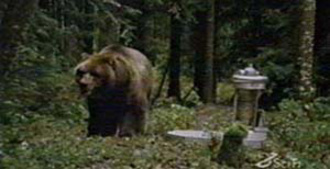 A desperate mission to an uncharted planet to find resources that might save a dying Earth goes awry when the exploration team proves all but incapable of dealing with the world's dominant form of life: giant, superintelligent bears. That are played by normal-sized, predictably chubby trained bears. Who occasionally stand up on their hind legs and wiggle their fat butts, and are sometimes doubled in close-ups by rugs and taxidermy. We cannot be any clearer than this. If you can't deal with bears, why are you risking your life on alien planets?

Gorgan the Friendly Angel Appeared on Star Trek, "And the Children Shall Lead" (1968)

There are any number of lame Star Trek monsters we could have picked, with one popular suggestion being the talking oil slick who killed Tasha Yar. But we have a special loathing for this one, played by noted attorney Melvin Belli, who as an actor made a fine lawyer.

Gorgan was an intangible presence whose whisper campaign induced a colony of Earth children to play happily after the deaths of their parents. Belli's costume looked a little like a judge's robe doused in glitter, and the happy ending where the kids come back to the side of goodness and make the bad man go away establish him as a monster who wouldn't have been able to do any damage at all if everybody had just had the sense to tell him to sod off in the first place.

Tybo the Plant Man From "The Giant Vegetable Rebellion," Lost in Space (1968) 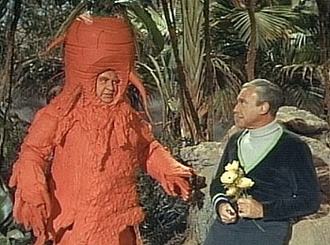 There are similarly any number of Lost in Space monsters we could have used, but the nadir appears to have been this walking carrot, who threatens the Jupiter 2 crew with transformation into vegetables. Given the typical achievement level of this show, just how bad must a Lost in Space episode be before the writer feels compelled to personally apologize to the cast? 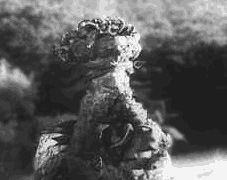 There's no getting around it: Before the age of CGI, many movie monsters moved with glacial slowness, in order to accommodate stuntmen stuck inside rubber suits who could barely see where they were going. If their victims didn't freeze in place or back up against walls, they would have been able to escape the beasties at a slow walk. Once upon a time, this was expected, almost celebrated.

But few monsters moved as slowly as the Creeping Terror, an invading alien slug played by what looked like a shag carpet and operated by crew members whose body shapes were often as visible as their feet. Designated victims had to pull themselves in through its mouth, while pretending that they would have preferred to be elsewhere. 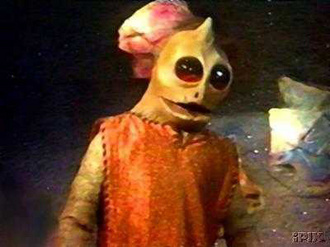 The reptile-men of Land of the Lost were slow-moving, rubber-suited creatures who could barely see where they were going and are remembered with great fondness by fans of the show, even though they seem to exist largely to make the Gorn from the Star Trek episode "Arena" look like a masterpiece of monster design.

What went wrong on the 1998 Lost in Space movie
Sexiest bot ever: Everyone's hot for the robot in Lost in Space 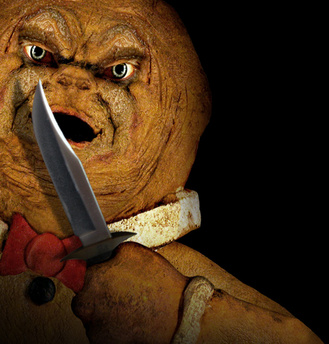 A murderer whose ashes are baked into cookie dough becomes what may be the most embarrassing role of Gary Busey's career ... and that's saying a lot. Check out the visual.