The 8 greatest Star Trek cameos ever

On the occasion of today's DVD/Blu-ray release of J.J. Abrams' Star Trek movie, it's a good time to review the many luminaries from science and entertainment who revealed their inner Trekkies by taking on small roles in the new and past incarnations of the beloved franchise.

Abrams' rebooted Trek, of course, is loaded with winking cameos, including appearances by Chris Doohan, son of Trek's original Scotty, the late James Doohan, as a transporter tech. (Fans recall that Chris and his twin brother, Montgomery, also cameoed in Star Trek: The Motion Picture.) There's also the voice cameo by Heroes' Greg Grunberg, Abrams' longtime pal, who is heard on the Corvette radio phone as young James T. Kirk steals the car.

Here are some other notable cameos from Abrams' Trek and other Star Trek shows and movies. (Click on the small images for larger versions.)

Pausch was the Carnegie Mellon computer-science professor who gained fame for his "last lecture," which became an Internet sensation and a best-selling book. He turns up in Abrams' Star Trek reboot, sharing a scene with Faran Tahir, who played Capt. Robau, on the bridge of the ill-fated U.S.S. Kelvin. Pausch, sadly, didn't live to see the film released; he succumbed to pancreatic cancer on July 25, 2008.

As he revealed earlier this month on his personal blog, the former Wesley Crusher of Star Trek: The Next Generation had a voice cameo in Abrams' Trek (listen carefully or you'll miss it, above). Wheaton provides the voices for all the Romulans on Nero's ship and even got the memorable line: "It's time."

Wheaton had earlier shot a scene reprising his TNG character for Star Trek Nemesis, but that scene hit the cutting-room floor.

(Fans can also see more of Winona Ryder as Amanda Grayson on the new DVD/Blu-ray. Oh, and in the extras, that's Abrams' Alias star Victor Garber playing a Klingon interrogator.) 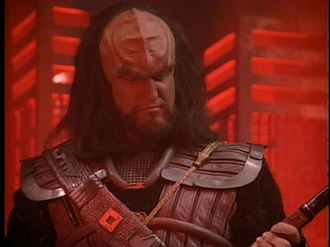 Today, Tesh is the king of radio who provides "intelligence for your life"—not to mention a punchline for his super-mellow New Age music—but once upon a time he hosted Entertainment Tonight, which shot a tribble's throw away from Star Trek: The Next Generation on the Paramount Pictures lot in Hollywood. Tesh turned up on ST:TNG as a holographic Klingon in "The Icarus Factor." 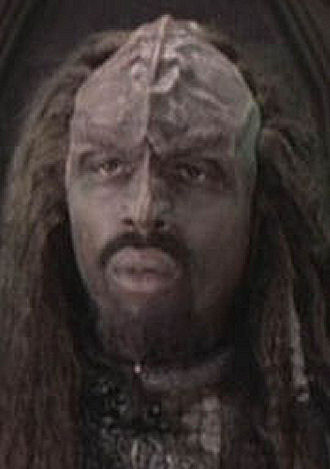 So what's a Hall of Fame basketball star doing on Star Trek: The Next Generation? Turns out he was a big Trekker—literally and figuratively—and met Robert "Gowron" O'Reilly on an airplane. The Laker and the actor got to talking, which led to a meeting with the producers, which led to Worthy's cameo in "Gambit, Part II," as a Klingon smuggler named Koral.

This one happens to be brilliant, a cameo above and beyond most cameos. In the Star Trek: The Next Generation episode "Descent," the android Data is glimpsed playing poker with hologram versions of Sir Isaac Newton, Albert Einstein and Stephen Hawking. Hawking, of course, played himself. A longtime Star Trek aficionado, he'd once sat in the captain's chair while on the lot at Paramount for business, and he also let it be known that he'd like to appear on the show if possible. Sure enough, the producers heard and heeded Hawking's request.

We all know that Family Guy creator MacFarlane is an uber-Trekker who's been sure to include Star Trek characters, references and actors on his numerous shows, including American Dad. So it was no surprise to see him turn up briefly on Enterprise. Actually, he did so twice, appearing as a character named Rivers in the episodes "The Forgotten" and "Affliction." 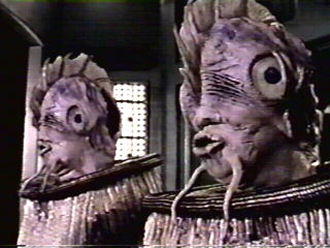 What to do when a tall, gangly rock-and-roll drummer wants to appear on your show? Well, if you're the producers of Star Trek: The Next Generation and that rock star is Fleetwood Mac co-founder Mick Fleetwood, you write him a role in the episode "Manhunt" as a no-name, fish-headed Antedean dignitary who turns out to be a would-be terrorist. (He's the one on the right, above. We think.) 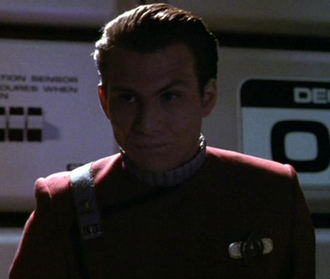 OK, this one is probably our favorite. Slater, a major star back in the late '80s and early '90s, loved Star Trek. His mom knew all about her son's affection for all things Trek and made certain he got a few moments of screen time in Star Trek VI: The Undiscovered Country as the Excelsior communications officer who wakes up Capt. Sulu. Slater's mama, it should be noted, is veteran casting director Mary Jo Slater, who just happened to be overseeing the choice of actors for Undiscovered Country.

Now you're probably sitting there going, "Hey, what about The Rock? He was on Voyager." Yes, he was, and he was pretty good battling Jeri Ryan in "Tsunkatse." But let's be clear here: The Rock's appearance wasn't a cameo but a full-on guest shot; same with Jason Alexander in the Voyager outing "Think Tank."

Can you point out other cameos we may have missed?

(Ed. Note: Ian Spelling, who wrote this story, has also had small walk-on parts. Having covered Star Trek for more than 25 years, he asked Trek producer Rick Berman if he could be an extra for a story about such an experience. Berman agreed and let Spelling play a Bajoran in the Star Trek: Deep Space Nine episode "Emissary." He basically stood behind Colm Meaney. Later, when Voyager rolled around, Spelling returned to action, portraying a Drayan soldier lurking near a shuttlecraft in the episode "Innocence.")

For the latest sci-fi news, follow us on Twitter at @scifiwire
Tag: Star Trek
Close Search Return to SYFY homepage.