Stuntwoman-turned-actress Zoe Bell might just be America's answer to Michelle Yeoh. At least that's what comic writer Ed Brubaker thinks after viewing footage of Bell's work on their Web project for Sony's Crackle.com, Angel of Death. "She's a complete natural," Brubaker told SCI FI Wire in an exclusive interview. "She's going to be a huge movie star. The camera loves her, and she can beat the s--t out of everybody."

Best known as a comic writer and occasional cartoonist, Brubaker has been a force in the world of comics since the mid-'90s. Producer John Norris enlisted Brubaker to write Crackle.com's first series of webisodes, about an assassin with a brain injury, which Brubaker tailored for Bell (Grindhouse).

Angel of Death is a 10-wepisode series that is currently set for debut in February. Directed by Paul Etheridge, the series also stars Lawless, Ted Raimi and Doug Jones. Below is an edited version of our conversation with Brubaker about Bell and Angel of Death.

I was on set at the creepy old Linda Vista hospital in Los Angeles while they were shooting scenes with Zoe and Lucy. Did you make it to that set?

Brubaker: Yeah, they went through some of the rooms where ghosts had been seen, supposedly, and where there had been some little rituals. That's like H.P. Lovecraft High School. That's the great thing about L.A., is they don't tear places like that down. It's like, "F--k that, we could make money out of it."

How did you first get involved with Angel of Death?

Brubaker: John Norris, the producer, was trying to get the rights from one of my comics, Criminal, to do a Web series. And he mentioned that they'd been talking to Zoe about doing something, and I'm a huge fan of hers—her documentary and Kill Bill [in which she stunt-doubled Uma Thurman] and Xena [Warrior Princess, in which she doubled Lawless]. So I said, "Why don't you let me sit on that for a few days and see if I can come up with something just for Zoe?" I had this idea about a hitman who gets a brain injury and turns on the people that they work for. So I thought, how cool would it be if it were Zoe instead of a guy? A total female action hero?

And then I had seen this documentary years ago about this ER in Texas, and I remember they had this guy come in with a hunting knife stabbed right through his brain. They just pulled the knife out, and he didn't want antibiotics, and he was fine. Such a great image [laughs].

I typed up this pitch and sent it to John, and it pretty much got green-lit almost immediately the minute we attached Zoe and got everyone to sign off on her starring in it. 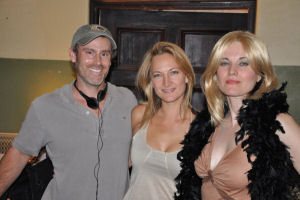 It seems like the studios are starting to take webisodes more seriously and put some money behind them.

Brubaker: One thing is Sony put together just a teaser trailer to show to people internally what we were doing, and everybody flipped for it. I showed it to some people at Marvel, and I put it on the boardroom big screen, and people were like, "Wait, this is for the Internet?" Nobody could believe it, because it just looks like a movie.

I think Dr. Horrible [Joss Whedon's Web musical] broke the three-minute rule. It's 15 minutes, and millions of people are going to watch it. That was always my thing. Don't have any rules. People will watch something for as long as it's entertaining.

This is not a huge budget, and I don't think people will believe the budget we had when they see it. It was so painless compared to what the usual studio process is. I think it's kind of cool. It's probably what the early '70s felt like with making films. It feels to me like an artier version of a grindhouse movie.

Sony is really treating this more like a theatrical film in terms of promotion and early press.

Brubaker: Sony is really getting behind it. They are redesigning their whole Web presence around this. We got lucky enough to be the launch project. They already have, like, four other projects lined up, and Angel of Death is being used as the calling card.

Director Paul Etheridge compared this to the serials of the '30s and '40s. He shoots a heightened take one for the end of an episode and then a second take that's downplayed to transition better when the feature is edited together.

Brubaker: We talked about that as I was working on it, because sometimes you can't have the exact perfect cliffhanger that you want, so you have to distort and have a "Huh?" kind of moment. But when it's going to be a movie, you need less of that. You need something to subtly move you into the next scene.

I think we ended up with more action than if it hadn't been done as an episodic. Seeing the action filmed, it's a good thing we did it that way. Zoe's a f--king action star, you know?

I've been talking to her a lot, and we've become pretty good friends. We have the same birthday. I email with her a lot. She's over in Germany, and we've been emailing about other ideas. She needs to be the next action hero. It's a new world with the way our world is changing. The next Indiana Jones should be Zoe Bell.

It's also cool to actually have a star that can perform the stunts on their own in a single shot rather than having to cut for a double.

Brubaker: Exactly. That was the funniest thing. All of our stuntmen had just gotten back from being on [X-Men Origins:] Wolverine. They all had, like, a line or two of dialogue, and the first few takes, they had to be reminded not to turn away from the camera while they are delivering their dialogue, because they are so used to having to have someone else cut in.

We were able to do action scenes that were choreographed like a ballet. That was Paul's whole thing. It's not quick cuts everywhere. There's this bathroom scene, it's one of the most brutal f--king fights I've ever seen.

The Lucy Lawless cameo looks like a lot of fun.

Brubaker: That was great, writing a role for Lucy Lawless. That was Paul's suggestion, that I write a role for her. We never thought we would actually get her. We didn't tell her it was for Zoe before she signed on. It's a little easter egg for the Xena fanbase. She brought a Southern accent to the character and just had fun with it.

When I heard that they got Ted Raimi and Lucy Lawless, I was like, "Oh, man, we should try to get Bruce Campbell!" And everybody was like, "No. That's a little too far.'" [Laughs.]

I don't know how this ends, but is there talk of continuing Angel of Death?

Brubaker: They want me to do more of this. I'm waiting for Sony to sign off on some stuff, and we're trying to come up with ideas to give Doug [Jones] a bigger role, because he's so great in it. There's sequel talk, and Sony has plans for it in other markets, too. I don't know how much I'm allowed to talk about it, but it was definitely left open for a sequel. That was the request.

Ed Brubaker's spy thriller Velvet to be first TV series on new Paramount Network
Pulp: What happens to cowboys who outlive their prime? They move to NYC and fight Nazis

Get more Angel of Death at Crackle!