The Avatar action and creatures you still haven't seen

James Cameron has been showing a lot of Avatar: He's screened footage at Comic-Con and on "Avatar Day," revealing action scenes, and there was a teaser trailer, then an extended trailer. But there are still plenty of action scenes and creatures awaiting viewers when the film opens, we learned in interviews on Monday.

Zoe Saldana, who plays the Na'vi alien named Neytiri in the film, described some of the action she performed that the trailers have not yet spoiled. "Just so you know, I fell off of horses, had a horse step on me," Saldana said in a group interview on Monday in Los Angeles, where she was promoting the DVD/Blu-ray release of Star Trek. "I made bets with my bow and my arrow that Jim lost at times, and then I lost at times. Sam [Worthington] almost broke a pinky. It was a lot of action. Jim is just saving it for the screen, trust me. He's saving the best for last, Dec. 18."

Worthington plays Jake Sully, a paralyzed marine assigned to infiltrate the Na'vi, the inhabitants of the planet Pandora. He does this by accessing an avatar, his Na'vi form, which he can control, with full use of the avatar's body. The Na'vi pursue an adventure that spans the wild forests of Pandora, wrestling with dragon-like banshees on the cliffs and fighting off high-tech military forces.

Saldana added that, as with the marketing campaign for Star Trek, the promotion of Avatar is slowly unveiling its best stuff. "Stay tuned," she said. "What I'm saying is they keep releasing it, the trailers keep getting better and better, the same as with Star Trek. There's definitely a lot of action, and we were pushed. Sam and I were pushed beyond what we thought was our limit as human beings, physically. I can honestly say I left that set as a different person, a different actor." 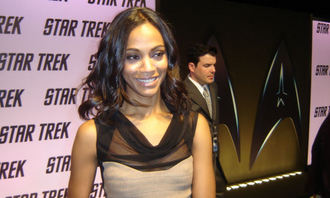 Neville Page, who worked as a creature designer with Cameron, said there are many more fantastic creatures on the planet of Pandora. So far, we've seen only the banshee and some forest beasts.

"So much more, there really is," Page said in a separate interview. "There're some great, great surprise moments with creatures. For me, that's what the whole production was about, was three years of designing animals in the forest. Oh, there's so much left. Five years of design development in the works, so there's tons of stuff left."

If you really home in on the trailer, watching it frame by frame, maybe you'll glimpse some creatures in the background. They'll get their close-ups in the final film. "There's a lot of stuff going on in the background, that's for sure," Page added.

Page was working as recently as July, after the screening of footage at Comic-Con, to complete work on Avatar's creatures. "I did some final touches," he said. "There was just final color passes on some of the flying creatures, but I think they're done now. I have nothing left to do on it except wait, like everyone else anxious to see it."