The creators of NBC's Kings reveal the magic behind the realism

Francis Lawrence and David Green, the executive producers of NBC's upcoming Kings, told SCI FI Wire that the show takes place in an alternate-universe city not unlike New York, in which a monarchy exists and magical things may or may not happen.

"For us, I think, it was always this idea of magical realism, that these things happen, and they could be magic or they could be real," Green (Heroes) said in an exclusive interview last week in Universal City, Calif., during NBC's portion of the Television Critics Association winter press tour. "It's sort of up for you to interpret that. The butterflies in the story and the things that happen could be something sort of guiding things along, or it could just be nature."

Kings is a contemporary retelling of the biblical tale of King David. King Silas Benjamin (Ian McShane) is the well-entrenched king of Gilboa, whose flag bears a divine butterfly symbol. Gilboa has its capital in Shiloh, a new city that is unspoiled by time or litter. Silas must deal with the tensions rising between Gilboa and neighboring nation Gath. When several prisoners of war are taken, a young soldier, David Shepard (Chris Egan), defies orders and crosses enemy lines to save them. Unbeknownst to David, the soldier he saves is Jack Benjamin (Sebastian Stan), the son of the king. From that day forth, David's life will never be the same.

"I would say it's a bit of a heightened reality," Lawrence said. "You know, that's one of the things that I like is sort of creating worlds that aren't real and almost obviously aren't real, right? But then treating it in as realistic a way as possible. So trying to make the acting as naturalistic as possible and the camerawork as naturalistic as possible, but still keeping things composed. I mean, obviously the writing isn't the way we speak typically now, and that also helps create the world, so it's this kind of balance of created and natural together that I think makes something kind of interesting."

Kings also stars Susanna Thompson, Allison Miller, Wes Studi, Eamonn Walker and Dylan Baker. The show does not have a debut date yet but is slated for midseason.

Lawrence, who helmed the movie I Am Legend, directed Kings' pilot. Following is an edited version of our conversation with Green and Lawrence.

This takes place in an alternate universe New York?

Lawrence: It's a little bit, yeah. I mean, it's kind of an alternate take, so it's a very familiar world, but, you know, a little bit different. It's a country that looks and feels like we know it, except it's run by a monarchy. And it was kind of fun changing around the details a little bit and making it our own.

What is the relevance to now?

Green: ... I think any good story that lasts deserves to be retold. ... [Like] modern-dress Shakespeare, Bible stories keep getting retold. So we sort of took the elements of that and wanted to see what they would look like interpolated in the modern world. And we had a lot of opinions about what government is like in today's time: ... What's it like to live in a world where people actually believe in their leaders and have good reason to believe in their leaders. We sort of created an idealized world, the same [way] we took New York and cleaned it up and actually made it a much greener city or a much cleaner city. ... We sort of did the same thing with government, that there was something to believe in there. As for where it came from, [it's] a hero's journey story, and that's something that I was always fascinated by. ... 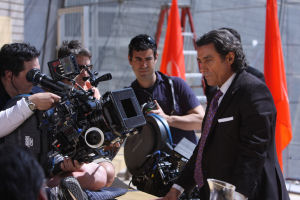 It's fortuitous it's coming out now, with the very real change in government in Washington. It's coincidental, but how does it inform what you've done?

Green: ... I wrote it when Bush was still very much in power, but we were all sort of starting to see the potential for change and looking forward to that, in any direction. People used to make jokes about how that was a bit of a monarchy of its own, so it wasn't written in a vacuum, this idea of power changing and a new regime starting. ...

Talk about the casting.

Green: We have very, very fortunate casting. We have Ian McShane as our lead, [who] plays King Silas Benjamin, who is sort of the greatest.

Lawrence: ... who you had in your head when you were writing this thing.

We have Chris Egan playing David.

Lawrence: Who was a real find.

Green: Chris Egan, total find. We looked at a lot of different guys to play the lead, David Shepard, and after probably two or three hundred, we came upon Chris Egan. ...

And we have Sebastian Stan, who is just amazing, one of the most interesting-to-watch people ever. Susanna Thompson, who we all love from Once and Again and the occasional Borg queen, since you're [scifiwire.com]. Allison Miller, who was another last-minute find. How do you find someone who can plausibly play a princess in today's world? And Macaulay Culkin and Brian Cox came and joined us. ...

And there's a David-and-Goliath kind of thing as well?

Lawrence: ... There is a David and Goliath, but Goliath is modernized, so in ours, Goliath is a tank. Yes.