The often-talked-about Crow reboot has finally found its director in Juan Carlos Fresnadillo. You know—the guy who directed the zombie sequel 28 Weeks Later? But still no news on who'll play the lead just yet.

In a press release by Relativity Media, it was announced that Fresnadillo would not only direct this "reimagining" of the dark, iconic 1994 film (which was itself based on the James O' Barr comic-book series), but also write the film with an as-yet-unnamed co-writer.

And guess which character will be brought back! Yep, the main man in the makeup himself, Eric Draven.

The Crow adaptation will be a reboot of the iconic cult character Eric Draven, who's resurrected as The Crow to avenge his wife's murder so he can reunite with her in the hereafter, as first envisioned by graphic novelist James O'Barr.

"The original Crow was groundbreaking cinema; its gothic visual and musical ideas influenced a generation and cinema itself. With Juan Carlos, we have every confidence that his new Crow will have a similar impact on the contemporary audience." 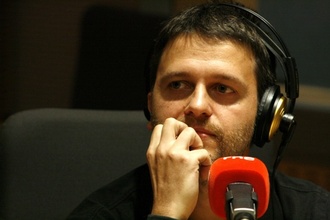 The last time we talked to you guys about The Crow, back in October, the studio said they weren't bringing back the iconic character of Draven. Perhaps they still felt there was a stigma on the character since its star, Brandon Lee, was infamously killed during the making of the 1994 film. Wonder what changed their minds.

And back then, Mark Wahlberg had reportedly been offered the lead role ...

What do you think? Do you think Juan Carlos Fresnadillo will be able to bring the same energy to The Crow that he brought to 28 Weeks Later (which he also co-wrote)? And who do you think would be the perfect guy to play Eric Draven in the film?