Tag: Fangrrls
How Dark utilizes yellow costumes as a symbol of love and a sign of danger
Tag: Movies
Horror thriller 'Antebellum' shifts to VOD release, latest major film to skip U.S. theaters
Tag: TV
'The Boys' crew digs into why that whale scene is just the tip of the iceberg for an even wilder S2
Tag: TV
Noël Wells and Eugene Cordero know you will ship them on Star Trek: Lower Decks

This it is, guys. The final days of the Ponds are really upon us, as we'll have to say a teary goodbye to Amy (Karen Gillan) and Rory (Arthur Darvill) on this Saturday's episode of Doctor Who. And ahead of ''The Angels Take Manhattan,'' we have 26 teasers to share with you.

Those teasers are coming to us courtesy of both SFX and Doctor Who TV. Some are pretty cryptic, while others are more straightforward.

Why Karen Gillan fondled Matt Smith during their final Who scene
Doctor Who's Rory talks season 7, the Daleks and why he's leaving

We've highlighted some of the teasers that we found rather interesting and or truly mysterious.

It's a weepie; Moffat was telling the truth about that

It's a truly memorable companions' goodbye episode, but it doesn't go over-the-top

There are some spectacular effects, including a TARDIS materialization 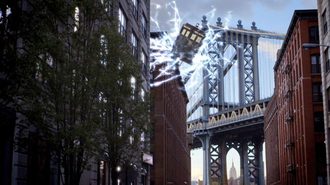 One of the most memorable images doesn't quite make sense if you think about it, but it's a bloody good image so best not to think about it too much

Be prepared for any kids in the room watching to issue a continual stream of, "But they looked away! He blinked! She was looking!"

The film noire feel is spot on

There are a lot of Moffat's hastily delivered, off-the-cuff explanations, so pay attention

The Doctor makes some final checks

If you want to read too much into one revelation, Steven Moffat probably doesn't consider episode titles as spoilers

Some wrist action may be vital to the future

Stay till after the end credits

"I won't let them take him"

A family trip to the pub is ruined

"Just you wait until my husband gets home"

"There's a car out front. Shall we steal it?"

"Rory, do I have noticeable lines on my eyes now?"

The Doctors pockets keep getting deeper and deeper

Can you make heads or tails of any of those teasers? Let the speculation begin!

Doctor Who's ''The Angels Take Manhattan'' airs this Saturday on BBC One, BBC America and SPACE.

(via SFX and Doctor Who TV)