The first Green Lantern footage: What we saw and what you thought of it

The San Diego Comic-Con audience was pumped and rocking as it awaited the world premiere of footage from Green Lantern in Hall H. Moderator Geoff Boucher from the Los Angeles Times introduced DC Comics mastermind Geoff Johns, who then introduced the first footage seen anywhere from the still-in-production movie. Here's what we saw next—and what the fans thought of it.

There's a long spoken intro over a black screen with a green-white light pulsating in the middle, and something about being chosen and tested by the Guardians for induction into the Green Lantern Corps (or something like that—it's early, folks). Then the light expands and off we go!

11 most ridiculously overpowered superpowers in sci-fi history
The Flash: Diggle's return will deal with aftermath of that Green Lantern tease in Arrow finale

It's short and fast, but we get glimpses of alien Lanterns, Dr. Hector Hammond (Peter Sarsgaard) ripping something out of the dead body of Abin Sur, the ring glowing in the palm of Hal Jordan's (Ryan Reynolds) hand, a very quick shot of a mutated Hammond attacking someone, and an extended sequence in which Reynolds is being beaten by a gang of thugs, throws a punch—and levels the place with a green bolt of energy! The teaser ends with the glowing Green Lantern logo larger than life in the middle of the screen as Hall H erupts. 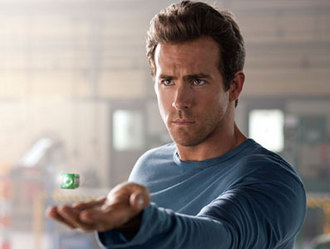 The only thing we don't see is Reynolds rocking the full Green Lantern costume. Well, that's not true, we also don't see the planet Oa and the 3,600 Lanterns assembled there, all of which producer Donald DeLine says will show up. He also promises that we will see beloved Lanterns from across the entire mythology.

"Killawog!" shouts someone from the audience. "Don't worry," says DeLine, "He'll be there."

Since Reynolds' wife, Scarlett Johansson, plays Black Widow in Iron Man 2 and presumably other Marvel movies, he's asked if the DC/Marvel rivalry causes tension at home. "We've had some strongly worded dinners," Reynolds jokes. "We probably have a lot more comic books around the house than the average married couple."

Reynolds admits he wasn't very well versed in the Green Lantern universe before taking a meeting with director Martin Campbell, who showed him designs for the various planets, the Green Lantern Corps members and the costumes. "After that," says Reynolds, "I was begging him for the role." A few minutes later, when the floor is open to questions, Reynolds literally makes a little kid's year by reciting the Green Lantern oath upon request. The expression on the boy's face? Priceless. (He also gets a comic book signed by his hero.)

The very crowd-friendly Reynolds concludes by giving away the Lantern ring on his finger to a lucky winner who finds a magic ticket under their seat. And with that, it's over. But there's no question that Green Lantern has won over the Comic-Con audience ... now all we have to do is wait until next June.