The five faces of Zoe that you'll see in Caprica

In the show—which premieres Jan. 22 and airs Fridays at 9 p.m. ET/PT—Daniel Graystone is a computer engineering genius and owns a large corporation that is spearheading the development of artificial intelligence. His unwavering professional pursuits are driven to extreme measures when personal tragedy strikes him and his wife, Amanda (Paula Malcomson), as their strong-willed daughter, Zoe (Torresani), dies in a terrorist bombing fueled by an underground religious dogma. Unbeknownst to her parents, the teenager had also been dabbling in these radical teachings, which were secretly propagated by her school's headmistress, Sister Clarice Willow (Polly Walker).

"I've done a scene where I play three characters in one," Torresani said. "Season 1.5, the second half, third episode into it. Besides just that, I get to play five completely different characters, which is not like any female 16-year-old show character that I've ever seen before in my life." 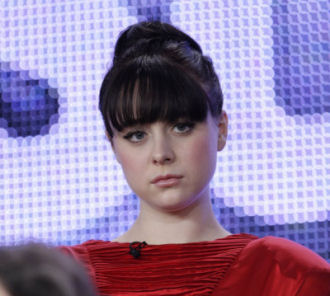 So here's a rundown of the five Zoes, per Torresani:

Zoe O: "Zoe 0 is the original Zoe, who's the daughter of Amanda and Daniel Graystone," Torresani said in an interview this week in Pasadena, Calif., at the Television Critics Association winter press tour. "She's the rebellious girl that's trying to find the Soldiers of the One and is trying to find the One True God on Gemenon."

V World Zoe: "She creates the avatar, which lives in the virtual world. The avatar is the childlike version of herself, but when original Zoe's in the V club, she's this wild, crazy [girl], has tons of sex, drugs, does all this but now is trying to clean up her act and clean up the V world. Does that kind of make sense to you?"

Cylon Zoe: Daniel Graystone figures out how to put his daughter's memories into the very first Cylon. The show will portray the machine both as a robot (depicted with visual effects) and as Torresani herself (representing the character's inner personality, which only the audience sees).

Torresani shared a little bit about her process for portraying the different versions of the character. "The avatar, it's like a rebirth of a child," Torresani said. "She's a newborn. She's touching things for the first time. She's standing for the first time. She's talking for the first time. It's this innocence that is very bizarre to see come out of a 16-year-old's body and mouth. I completely erase everything and just pretend that I'm this newborn child. You have to, but it's very, very hard when you're playing the Cylon as well and playing another character."

The original Zoe is wise beyond her years. "Zoe Original is the 16-year-old girl that's a brat, that's just a spoiled, rich brat that's rebelling against her family, but she believes in the One True God," she said. "She's a strong individual. She's just fighting for what she believes in. She's trapped in the 16-year-old-girl body, but she's like a 45-year-old woman. She's just mature. I just get it. I was that girl at a point in my life, so I understand it."

Make sense to you?

Will you be tuning in?