Sci-fi has always promised us a future filled with jetpacks, lightsabers and, most importantly, women in black leather catsuits. (Scarlett Johansson as Black Widow in Iron Man 2 being the sexiest recent example.) Sadly, in real life—except for Comic-Con—it continues to be pretty rare.

So as we wait for the utopian future Galaxina promised us to become a reality, let's take a look back at some of sci-fi's sexiest skintight outfits. 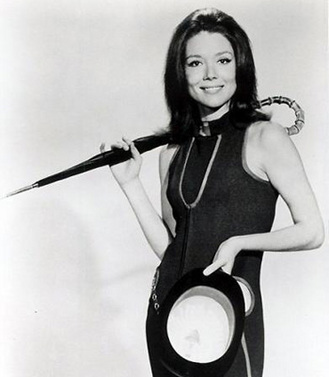 An entire generation of viewers on both sides of the Atlantic undoubtedly have fond memories of Dame Diana Rigg's skintight outfits, including a black leather catsuit that pretty much redefined the default look for swingin' '60s spy-fi. 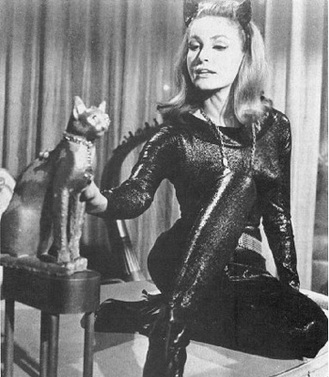 The role of Catwoman was played by three different actresses on Batman (including former Miss America Lee Meriwether and Eartha Kitt), but it was Julie Newmar who gave the most important contribution to the world of physics, as her appearance in costume achieved a level of hotness previously seen only in the sun. 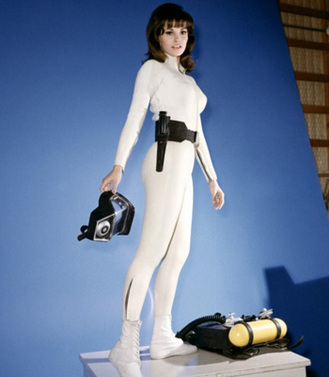 Before Playboy would dub her "The Most Desired Woman of the '70s," Raquel Welch starred in a movie that, unlike the Coolio song of the same name, involved a shrink ray, a nuclear submarine and a Cold War Soviet spy in what has to be the most complicated setup for an "I'd like to go inside her body" joke I've ever heard. 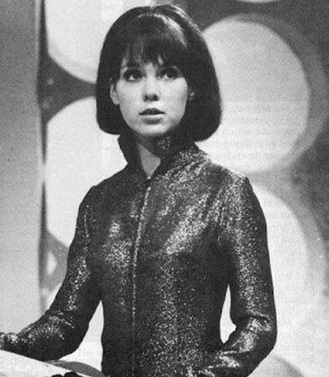 One of the many companions who served as interplanetary arm candy for the Doctor, Zoe was a scientist serving as a space station's resident librarian. This might make her choice of outfit seem a little odd, but if you think 21st-century astrophysicists don't take every opportunity to rock skintight sparkly catsuits, you've clearly never spent a wild Las Vegas weekend with Neil deGrasse Tyson. 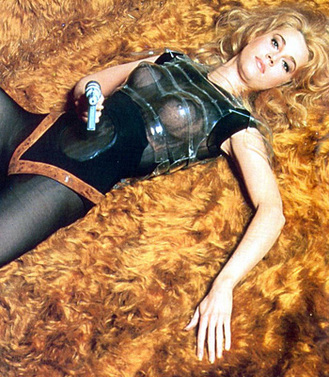 It's not that it's not nice, but when the rest of the movie involves a zero-gravity striptease and a machine designed to torture its victims through excessive pleasure, the outfits aren't really the top concern here. 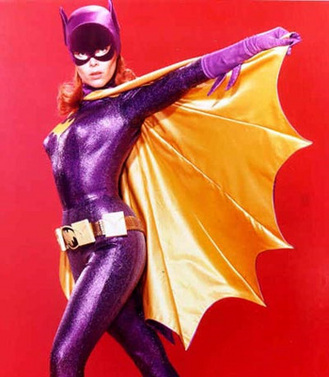 Operating on the assumption that if one black catsuit was good then adding a purple one with a cape would be great (which was, in fact, absolutely correct), the producers of Batman added Batgirl to the cast. Sadly, she was only present for one season, but considering that it was a tenure marked by both the Siamese Human Knot and a scene that combines bondage and Adam West's sex face, it was worth it. 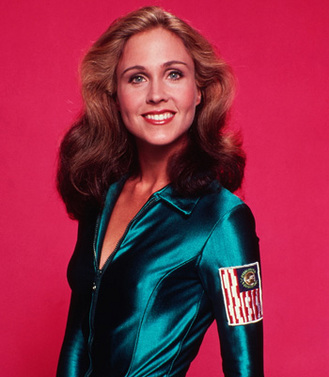 Embodying the promise of a catsuited future, Erin Gray's Wilma Deering was often more notable for the hats she chose to accessorize with, including one that made her look like the world's shiniest flight attendant and a truly ridiculous helmet that even Mel Brooks couldn't top for comedic value. 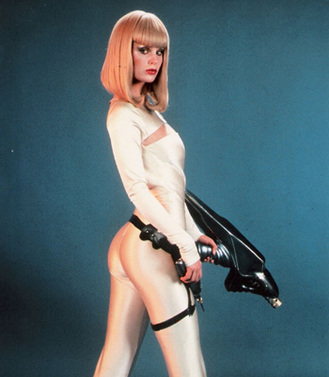 Considering that today's most advanced sex-bot looks like someone left a marshmallow duplicate Catherine Tate in an oven half an hour too long, Galaxina represents a pinnacle in erotomaton technology that we may never actually reach. 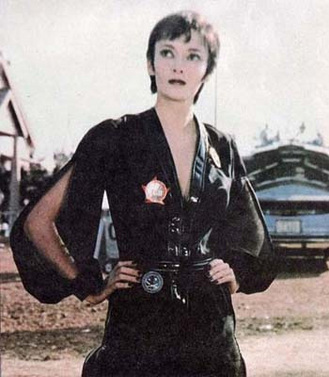 Superman II is considered by many fans to be not just the best of the franchise, but a close contender for the best comic-book movie ever, and a lot of that has to do with Sarah Douglas' performance and the fact that it finally answers the question "What if that really hot barista who sometimes smiles at me was actually a Kryptonian super-criminal?" 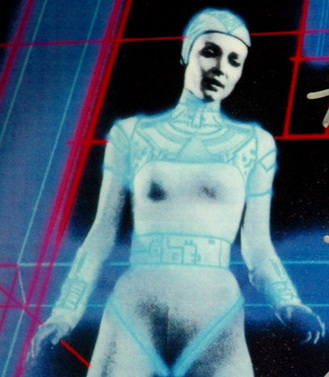 Of all the Internet's many, many sins, the fact that we can't look at Cindy Morgan's totally sweet neon-trimmed catsuit without seeing original meme star "Tron Guy" is perhaps the greatest. 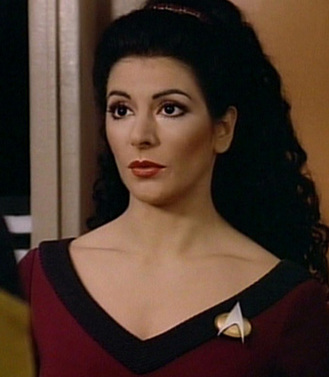 While the asymmetrical V-necks weren't bad, Counselor Troi—like Wesley Crusher—actually ended up looking a lot better once she was actually wearing a uniform, probably because she didn't look like she'd gotten out of bed and wandered to the bridge of the Enterprise without changing out of her pajamas. It's tragic, however, that she missed the kicky Yeoman Rand go-go dresses by 20 years. 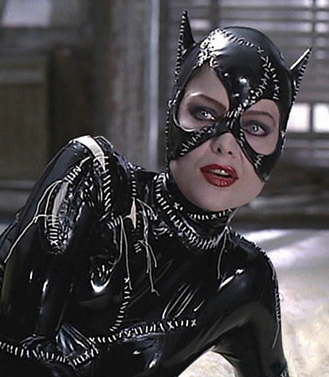 To be honest, I've never been too keen on Michelle Pfeifer's Catwoman. It's nice enough, sure, but the faux stitching is a little too Tim Burton Hot Topic Mall Goth for my tastes, and I always thought they could've done better. Then, when Halle Berry's Catwoman came out a decade later, I realized that they also could've done worse. Much, much worse. 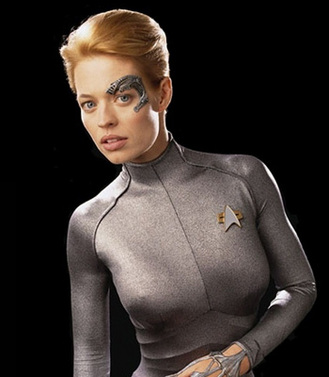 No matter how much Voyager fan fiction I read, I still have yet to find a satisfactory explanation for why, when they had the technology that could turn one of the Borg into Jeri Ryan, Locutus just ended up looking like Patrick Stewart again.

Carrie-Anne Moss as Trinity The Matrix (1999) 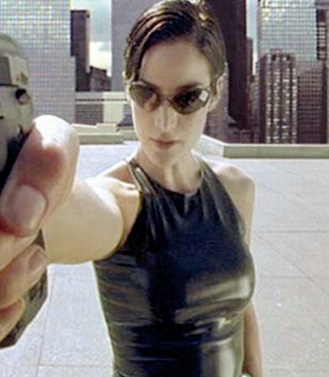 While the religious connotations of damn near everything about The Matrix could only be more obvious if the Wachowskis stood behind you whacking you in the head with a Bible for the entirety of three movies, I like to think that for Carrie-Anne Moss' character, the Trinity in question was black vinyl, hair dye and shades. 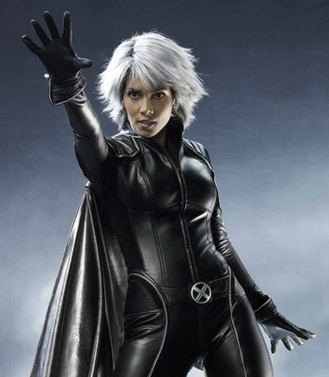 Halle Berry may have had to deliver one of the all-time worst lines ever written down by a human being in X-Men, but the rest of the movie's fun enough that you can almost—almost—forget about it. 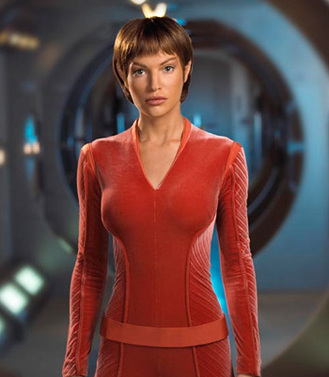 I'm just going to go out on a limb here and guess that the meeting in which someone suggested taking Kirk and Spock and making one of them a beautiful woman in an ultra-tight futuresuit and the other the guy from Quantum Leap probably ended with high fives, margaritas and at least one pay raise. 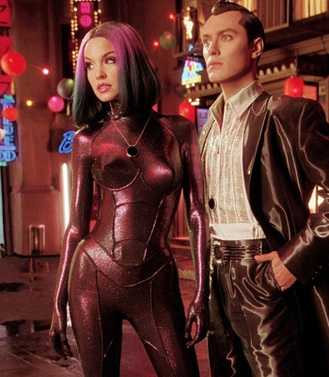 I haven't seen A.I., but I'm going to go ahead and guess that out of all the movies on this list, it's the one that's the most utterly unbelievable. Why? Because when Robot Technology gets to the point where Ashley Scotts and Jude Laws are being mass-produced, that's where robot technology ceases to advance. There will be no one going back to work the next day to work on a Haley Joel Osment. Civilization will have reached its plateau. 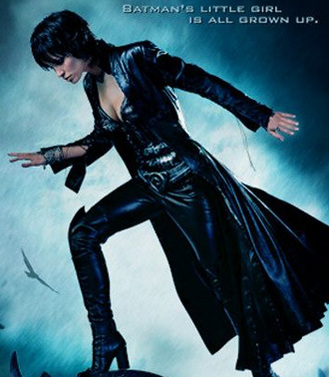 Honestly, how bad does a show have to tank for the star power of Ashley Scott in vinyl pants and former Soul Train host Shemar Moore combined not to be able to get it into a second season? 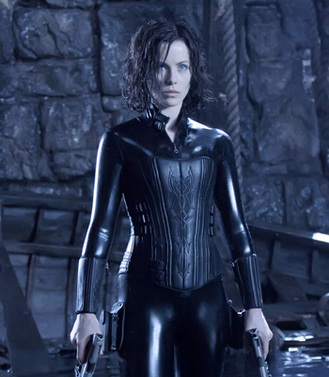 For her role as a gun-toting lady vampire, Kate Beckinsale combined a vinyl catsuit and a corset for a rare example of double fetishism, an advanced technique that should never be attempted by an amateur without first consulting a doctor. Or at the very least, a naughty nurse. 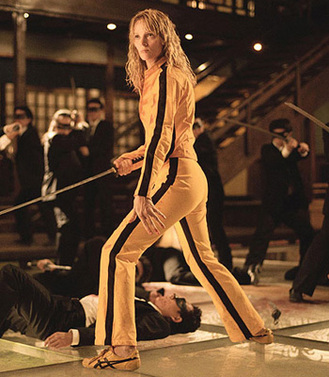 By the time she got around to Hattori Hanzo swords and the Crazy 88, Uma Thurman was no stranger to catsuits, having sported one in both the forgettable big-screen version of The Avengers and the unfortunately memorable Batman and Robin. This, however, was the first time she rocked one in a movie that actually wasn't terrible. Who knew Bruce Lee cosplay would look so good? 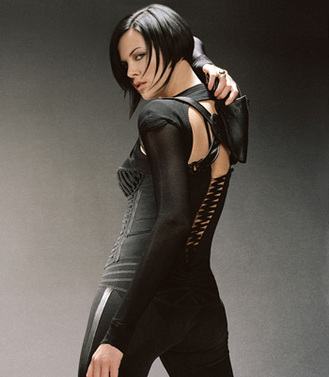 Until the movie came out, I was pretty sure I'd hallucinated Aeon Flux as an insomniac teenager who often passed out in front of MTV. And considering the change in outfits made for the live-action version, I'm still pretty sure that I imagined her animated counterpart's high-waisted thong and zip-up, long-sleeve, shoulder-padded halter top. 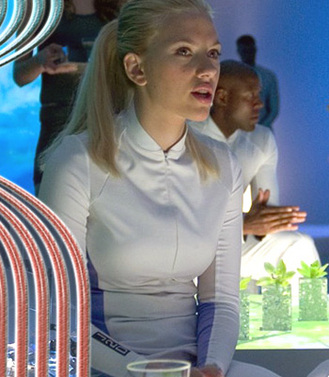 The Island was essentially a remake of Mystery Science Theater "honoree" Parts: The Clonus Horror, but with the dudes who wrestled in tiny gym shorts replaced by Scarlett Johansson in a form-fitting tracksuit. Congratulations, Michael Bay: You win this round. 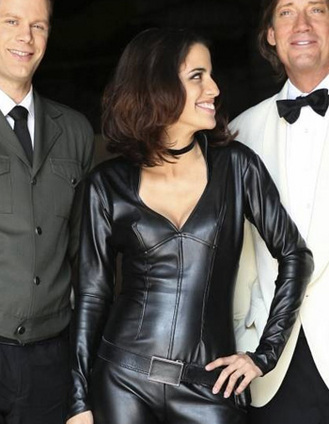 For most of the all-too-short run of The Middleman, Natalie Morales sported an Eisenhower jacket and necktie ensemble that was pretty darn flattering, but swapped it out for a tribute to Emma Peel in an episode built around spy movie cliches that also starred former Hercules Kevin Sorbo.

Sienna Miller as the Baroness / Rachel Nichols as Scarlett GI Joe: The Rise of Cobra (2009) 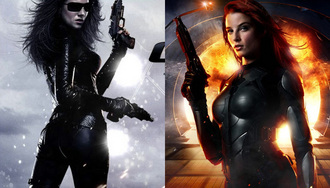 In what I can only assume was a concerted effort to present both sides of the story, last year's GI Joe movie featured catsuits on both sides of the good vs. evil equation. Unfortunately, things are somewhat complicated by the fact that it also includes a catsuit on the Marlon Wayans side of the equation. 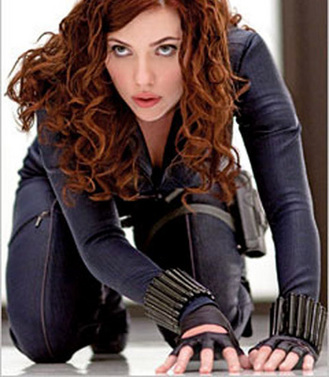 Unfortunately for Scarlett Johansson, any catsuit, no matter how alluringly stitched onto a lady who then proceeds to drop an official Marvel Comics beatdown on a bunch of stuntmen, is going to play second fiddle in a movie about Robert Downey Jr. and Don Cheadle's nuclear-powered underpants. It's just the way costume hierarchy works. 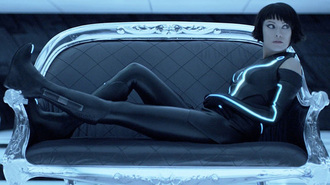 She's only onscreen in the trailer long enough for your brain to register that she's actually even better to look at than the glowing, spectral head of Jeff Bridges, but rest assured: Somewhere, somehow, the Internet is already well on its way to trying to ruin Quorra for us, too.

So in this grand collection of catsuits through the ages, who wore it best? If you think about it, there can be only one answer: 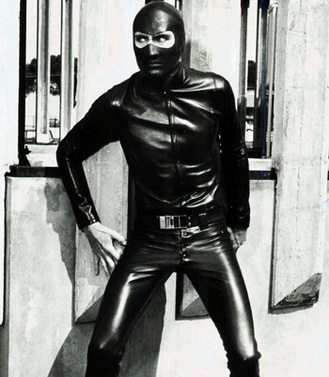 I think the reasoning here speaks for itself.