Rumor of the Day: Will this be Justice League's big-screen villain?

The Justice League movie is coming, and for the most part we've been concerned with the characters that will make up the team. But what about the villain? That's a huge part of the story and the center of the conflict. Well, we may have uncovered the mysterious Big Bad.

If the JLA consists of the usual suspects like Superman, Batman and Wonder Woman, they'll need a villain of epic proportions. After doing some digging, the folks at Latino Review think they've found the culprit. The Justice League may battle it out with Darkseid!

The Apokolips native is one of the most terrifying villains in the DC Universe. His abilities range from super strength and endurance to the Omega Force and immortality. Plus, he's a genius! He has brains and brawn, which makes him the perfect foe. If they can get Thanos for the Avengers sequel, we can buy Darkseid for Justice League. 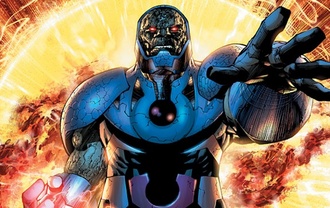 Do you think the JLA should face Darkseid? If not, what villain would you choose?