The law got Lawless: Xena arrested for her Greenpeace protest

Remember that time Lucy Lawless decided to join with Greenpeace activists and occupy an oil-drilling ship headed for the Alaskan coast? (Well, it was just last week.) The protest didn't last long: The New Zealand police have arrested Lawless and her compatriots.

Earlier today, the authorities removed Lawless and five other Greenpeace protesters from the drilling tower of the Noble Discoverer, where they had taken up residence over the weekend to demonstrate against Shell's decision to take advantage of global warming to find new places to drill. No charges have yet been filed. 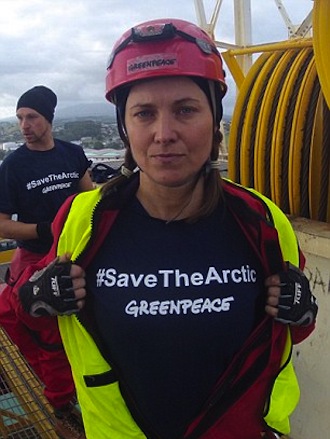 Here's what Lawless said last week of her motivations:

"The fact that now the major oil companies are spearheading this mad oil dash to the Arctic, one of the most pristine environments left on the planet, it's the definition of madness. They think the melting ice caps is not a warning to humanity about climate change—they think it's an invitation. This is unacceptable. We cannot allow our grandchildren to grow up with a terrible burden."

(via The Daily Mail)